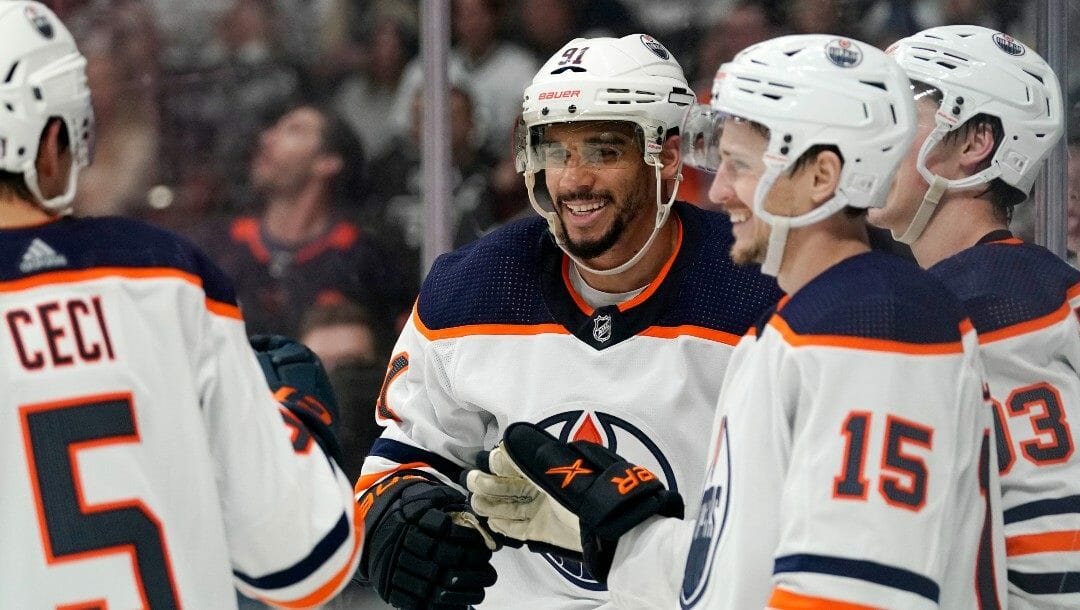 The first playoff battle of Alberta in 31 years is about to set the province alight, as the Calgary Flames and Edmonton Oilers prepare for a highly anticipated best-of-seven series.

The Flames entered the postseason as the third favorites to win the Stanley Cup at +900. Still third favorites, NHL playoff odds now have the Flames at +500. Only the New York Rangers and St. Louis Blues have longer Stanley Cup odds than the +1400 Oilers.

Both the Oilers and Flames were pushed to the brink of elimination in the opening round, with Calgary sneaking past a doggedly determined Dallas team via a Johnny Gaudreau Game 7 overtime winner.

It also took the Oilers seven games to vanquish the Kings, thanks almost solely to the unfathomably superlative play from captain Connor McDavid.

The heated rivalry takes center stage on Wednesday night, with the winner of this fascinating series set to advance to the Western Conference Final.

The Oilers and Flames took care of business on home ice against each other in the regular season. Edmonton welcomed Calgary to Rogers Place in the first two head-to-head battles, prevailing in both by a combined 10-5 score.

McDavid exploded for a hat trick in the opening encounter, yet again sticking it to the Oilers’ most loathed rivals. He has 26 goals in 34 contests against Calgary.

While those defeats were particularly disheartening for the Flames, they managed 47 shots on goal in both away encounters. Calgary outshot Edmonton in each of the four regular-season tilts, a theme that should continue in the second round.

The Flames flipped the script entirely when the provincial rivals met in Calgary. Winning 3-1 and 9-5 on home ice, the Flames smothered a hapless road version of the Oilers.

In four contests, 33 goals were scored, an average of 8.25 per contest. While exhilarating, dynamic and entertaining, don’t expect the same run-and-gun style when this series gets underway.

The Flames are superior defensively and won’t be keen on swapping chances in a high-scoring series, especially with the world’s best player resembling an unstoppable force of nature.

During the season series, the Oilers prolific power-play reached eminent heights, scoring on seven of 16 opportunities for a 44 percent rate of efficiency.

If the Flames are to prevail and advance to their first conference Final since 2004, they must stay out of penalty trouble.

Where Battle of Alberta Will Be Decided

More than any other playoff team aside from the already-eliminated Sidney Crosby-led Penguins, the Oilers’ success depends on a single player’s prodigiousness.

McDavid almost single-handedly brought the Oilers back from the brink against the Kings in Round 1. The superstar notched 14 points and was unplayable throughout, particularly in decisive Games 6 and 7.

Without McDavid’s heroics, Edmonton would not be staring down the barrel of a Round 2 matchup against their arch nemesis. Leon Draisaitl suffered an ankle injury early in Game 6 and was rendered comparatively ineffective.

It will be interesting to see if he fully recovers for the puck drop of Game 1 on Wednesday night. If Draisaitl is fully fit, Edmonton’s chances of upending Calgary skyrocket.

Like any other balanced series, goaltending will play a decisive factor. Mike Smith raised the heart rate of an entire city with a few erratic first-round moments, including an inexcusable giveaway that doomed the Oilers late in Game 1.

However, Smith, on the balance of the entire series against the Kings, exceeded expectations. The 40-year-old netminder shut the Kings out twice and enjoyed a .938 save percentage and a 2.29 goals against average (GAA).

Smith needs to continue his consistently strong play to give the Oilers a chance. He also has something to prove after leaving the Flames in the aftermath of a disappointing first-round five-game playoff defeat against Colorado in 2019.

And then there’s Jacob Markstrom, an even greater and opposite force whose stellar first-round play was the stuff legendary careers are made of.

Markstrom still has a long road ahead if he wants to be considered a Flames’ legend, but his indomitable play in the first round was a good place to start.

Markstrom completely nullified Dallas’ scoring threat, obtaining a league-best 1.53 GAA and a second-best .943 save percentage. It’s not just the gobsmacking stats that lead one to think Markstrom is set for a glorious path to supremacy. He also came up with countless, timely series-saving stops to thwart a surprising Stars team.

All things considered, the Flames have more depth, more potential secondary scoring, a superior defensive crew – if Chris Tanev and Oliver Kylington return – the edge in goal and a head coach who has already won two Stanley Cups.

Darryl Sutter propelled the Flames to the final hurdle in 2004, where they fell in seven games to the Tampa Bay Lightning. He’ll feel strongly there is unfinished business to attend to in the Stampede city.

Edmonton has the advantage on two fronts: McDavid looks like a man who will not be denied, a scary prospect for any NHL team.

The Oilers have a frighteningly formidable power-play, scoring on seven of 19 man advantages (36.8%) against the Kings, the second-best rate of any playoff combatant.

If the Flames consistently impede the prolific progress of McDavid and, depending on his health, Draisaitl, and stay out of the box, they’ll conquer the Oilers for the first time in the playoffs since 1986.

Look for the Flames to advance in six, potentially seven games.