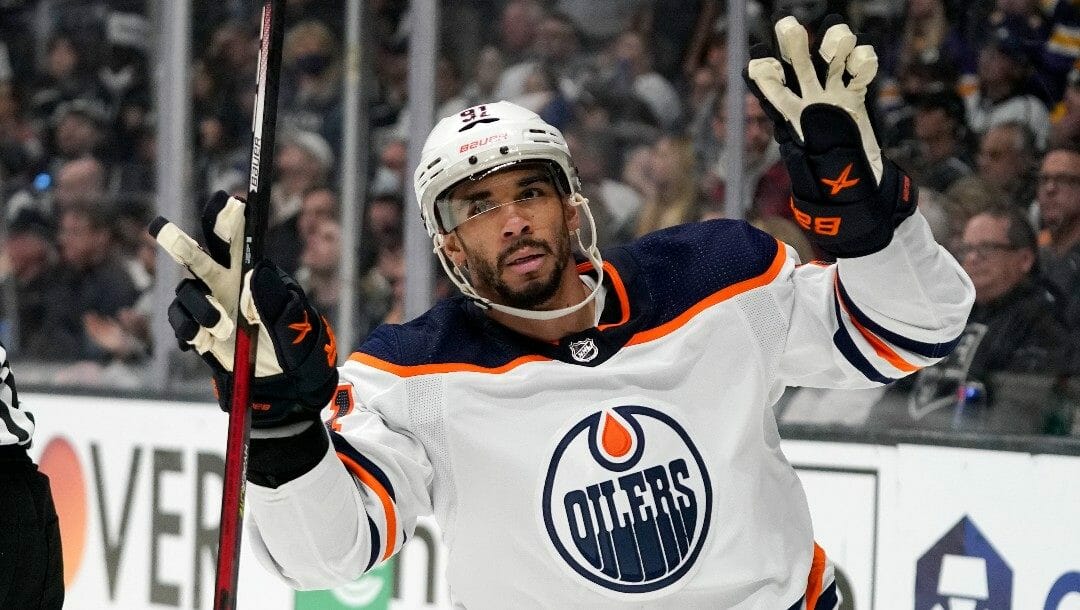 Even the most casual hockey fan will be tantalized by the prospect of the Battle of Alberta.

After two hard-fought opening-round series, the dream that has lived since 1991 has finally become a reality. The Calgary Flames and Edmonton Oilers are set to tango in the Western Conference Semifinal starting Wednesday at the Scotiabank Saddledome.

The Flames enter as heavy favorites when it comes to NHL playoff odds.

Both teams needed the entire runway to get past their quarterfinal opponents. Edmonton dug themselves out of a 3-2 series deficit versus the Los Angeles Kings, claiming victory in the final two games of the series to guarantee itself a spot in the next round. The Flames took an even more dramatic path, needing a come-from-behind overtime victory against the Dallas Stars in Game 7 to move on.

Now, the stage is set for one of the most intense rivalries in all of sports.

The winner of this series assures a spot in the Western Conferece Conference Final, making it two straight years that the third round will feature a Canadian team.

Below are analysis and NHL betting picks for the series.

The Stars gave the Oilers the blueprint for defeating the Flames.

The key to corraling Calgary is limiting its top line of Johnny Gaudreau, Matthew Tkachuk, and Elias Lindholm. Those three players combined for 301 points during the regular season, or 1.22 points per game, but just 0.90 points per game in the first round.

The trio elevated the Flames’ play in Game 7, combining for two of the three goals and five total points. Gaudreau pushed Calgary over the edge with his series-clinching goal, sneaking a tough angle shot over Jake Oettinger’s shoulder on the short side. Containing that line will yield similar results for the Oilers as it did the Stars; however, as seen in the series finale, the Oilers can’t take their foot off the pedal.

Edmonton played with reckless abandon through the first five games of their series against the Kings, trying to beat L.A. by trading chances with them. A change in structure precipitated meaningful adjustments over the final two games, with the Oilers driving possession and limiting the Kings’ offensive opportunities.

Edmonton posted a 55.6% Corsi rating at five-on-five, out-chancing their opponent in high-danger opportunities 30-19. Sustained effort keeps the puck away from the Flames’ first line, leveling the playing field and making this a more competitive series.

What’s reflected in those impressive metrics is the performance of Connor McDavid, who almost single-handedly dragged the Oilers to the second round. The two-time MVP was on the ice for 20 of the Oilers’ 27 goals in round one, recording points on 14 of those tallies. Still, McDavid made the team around him better, with 10 different players accumulating three or more points. As such, the Flames face a similar hurdle in trying to contain McDavid.

Calgary has been up to the defensive challenge all season, emphasizing structured play in its own zone to limit the opposition.

That was evident throughout the first round, with the Flames holding Dallas to eight or fewer high-danger chances in five of their seven outings. However, focused defensive efforts came at the expense of offensive opportunities, with the Flames out-chancing the Stars in just three of the seven games.

If the Oilers break free, the Flames will have to loosen the reigns to keep pace, putting them out of their wheelhouse.

Structure will be the name of the game in this Western Conference semifinal matchup. I am anticipating both teams preferring to play a defensive-minded game to limit their opponent’s chances. Consequently, this Pacific Division rivalry will live up to its namesake and be a battle. In a hard-fought series as this, I am betting it goes the distance.