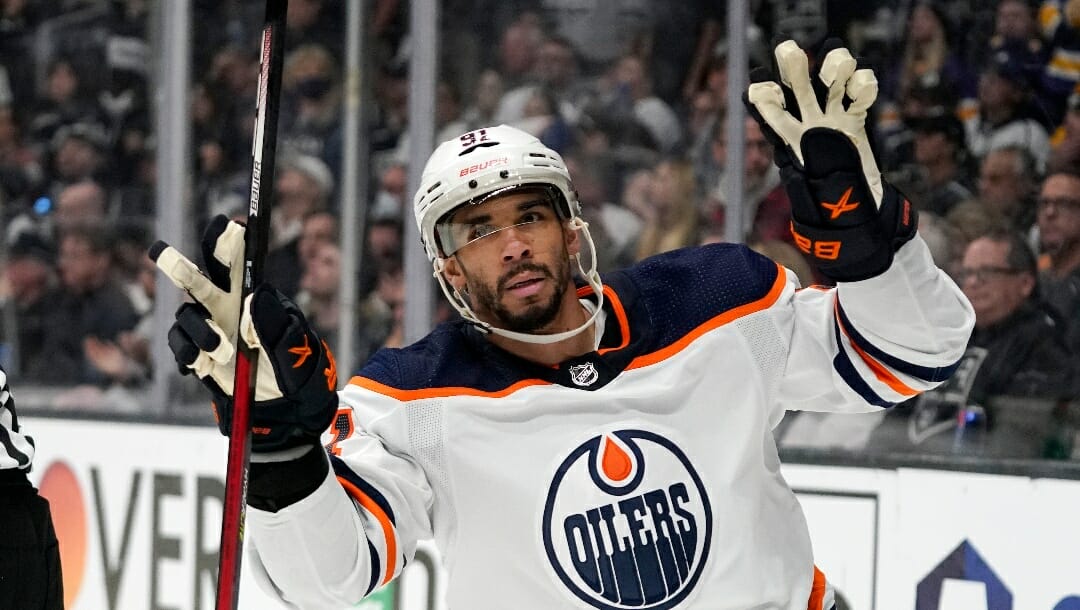 In an attempt to strengthen and turn the aspiration of winning a Stanley Cup into reality, several teams wasted no time making a splash in the NHL free-agent market.

NHL odds for the 2022-23 Stanley Cup were released almost immediately after the Colorado Avalanche won the Holy Grail three weeks ago.

Here are the biggest movers and shakers from a frantic first week of the NHL free-agent market.

The Edmonton Oilers understand the gravity of their current situation. They have the world’s best hockey player, Connor McDavid, and arguably the second-best offensive asset in the NHL, Leon Draisaitl. If they don’t win a Stanley Cup soon, both of their prized possessions might develop wandering eyes.

Cue the Oilers’ latest moves, which discernibly improve the Oilers’ chances of winning the 2022-23 Stanley Cup.

Yes, he has a lot of baggage and an abundance of skeletons from his days in San Jose. However, he developed untold chemistry with McDavid and was prolific in the postseason, scoring 13 goals in 15 games. He adds another scoring option for the Oilers, who cannot win a Cup by merely relying on McDavid and Draisaitl.

Despite his playoff inexperience, Jack Campbell is an upgrade from Mike Smith. The Oilers’ top brass probably overpaid to land Campbell but they feel like they had no choice. The 30-year-old netminder has played only 14 playoff games and is by no means an elite NHL puck stopper.

The Oilers will still feel like their chances of winning the 2022-23 Stanley Cup will improve with Campbell between the pipes. The signing of Campbell won’t be enough to shorten the Oilers’ NHL odds of winning it all. Nor will it compel those on the fence to jump on the Oilers’ futures bandwagon.

The stay-at-home defenseman, who played 18 games with Edmonton last season, will add a long-term, consistent, reliable presence on the blueline.

The Calgary Flames’ futures odds should lengthen after Johnny Gaudreau inexplicably decided to decamp and sign with the Columbus Blue Jackets. It’s thought that he snubbed the Flames and their superior contractual offer for family reasons. Personally, I believe Gaudreau is in desperate need of anonymity, which he’ll clearly, maybe regretfully, obtain in Columbus.

Gaudreau’s decision to leave has left the Flames with a chest full of cash but nobody to spend it on. It will be interesting to see how Calgary recovers from Gaudreau’s sucker punch. The Flames are purportedly interested in signing Colorado Cup winner Nazem Kadri. Losing Gaudreau might force Brad Treliving into securing Kadri’s signature at a somewhat inflated rate.

After 16 years and three Stanley Cups with the Pittsburgh Penguins, Evgeni Malkin was expected to test free agency. The Pens had no intention of letting Malkin, who has the second-most playoff points among active skaters, suit up for another squad.

Malkin, who has been plagued by injuries in recent years, missed 34 games last season after undergoing knee surgery. Scoring 1,146 points in 981 career games, the 2009 Conn Smythe winner still packs a potent offensive punch and provides the Pens with a bonafide chance of winning their first Cup since 2017. He will be 39 years old when the new deal expires.

The Pens want to win now and know their chances increase substantially with Kris Letang in the lineup. If you’re leaning toward the Pens as a 2022-23 futures pick, re-signing Letang offers another compelling reason to lock it in. There is an important caveat to consider, though. Letang has endured more injuries than an action star’s stunt double. Letang, who is 35 years old, has a few elite years left if he can stay healthy.

If the Pens are going to win another Cup, it will have to be in the next year or two, as Letang will invariably transition from asset to liability. If the Stanley Cup is to return to Pittsburgh, Letang has to avoid the treatment table.

Jan Rutta, a two-time Stanley Cup winner, is a sturdy, stoic stay-at-home defender and will further stabilize the Pens’ defensive corps. Rutta, 31, won both Cups with the Tampa Bay Lightning and adds even more winning pedigree to a Pens team already teeming with champions.

The fourth-liner doesn’t exactly bolster the Pens’ Stanley Cup chances but is a decent signing nonetheless. The 29-year-old played three seasons in Pittsburgh to begin his NHL career and will be elated at the prospect of returning to the place where he won the Stanley Cup.

As the Pens only added Rutta and Archibald to their squad, don’t expect their futures odds to shift.

The Rangers lost Ryan Strome and Andrew Copp to the Anaheim Ducks and Detroit Red Wings, respectively. The impetus on signing an offensive threat to complement Artemi Panarin was overtly apparent upon Strome and Copp’s departure.

Hence the arrival of Vincent Trocheck, who should commandeer the second-line center role. He scored a career-best 31 goals in 2017-18 with the Florida Panthers and has broken the 20-goal barrier four times, including last season with the Hurricanes.

Does he make the Rangers a better team going into the 2022-23 campaign in conjunction with Strome and Copp’s departures?

Unless the 29-year-old develops electrifying chemistry with Panarin, there’s not a lot of evidence to suggest the Blue Shirts are any better equipped to win Lord Stanley with Trocheck in the lineup.

The 37-year-old journeyman offers the Rangers a seasoned veteran and stable hand on the odd occasion when Igor Shesterkin requires a fleeting rest.

The Caps have been looking for the answer between the pipes for as long as anyone can recall, including their 2018 Cup-winning campaign.

The verdict is still out on whether Darcy Kuemper, who just won the Stanley Cup with the Colorado Avalanche, can fit the bill in Washington. While nobody can take away his garish ring, Kuemper was somewhat inconsistent throughout the Avs’ Cup-winning playoff run. Due to two separate injuries, Kuemper split the between-the-pipes duties with Pavel Francouz in the 2021-22 playoffs.

Kuemper is 32 years old and should be at his best for another three or four years. The question is whether his best is good enough to backstop the Caps to a Stanley Cup. The answer, unless his team in front of him gets markedly better, is an unequivocal no.

An astute move from the Caps’ top brass sees Dylan Strome sign a one-year, $3.5 million. He scored 22 goals, added 26 helpers in 69 games with the Blackhawks, and will add some desperately needed secondary scoring to Peter Laviolette’s team.

The Caps did excellent work in signing Eric Gustaffson for $800 thousand. He is a proven sixth-or-seventh D-man and accumulated a wealth of experience during his eight seasons with four different teams.

Charlie Lindgren will fit in behind Kuemper and Vitek Vanecek as the Caps’ third-string goaltender. The 28-year-old has only played 29 games in six NHL seasons with Habs and Blues.

Even with the wildly surprising, even astonishing signing of Johnny Hockey, the Columbus Blue Jackets have pretty much no chance of winning the Stanley Cup. The showcase signing thus far should shorten the Blue Jackets NHL odds, but not enough to convince anyone to back them as their futures pick.

This will be Erick Gudbranson’s eighth NHL team. Take a minute to digest that exorbitantly large number. He’s a decent defenseman but is hardly worth $4 million per season.