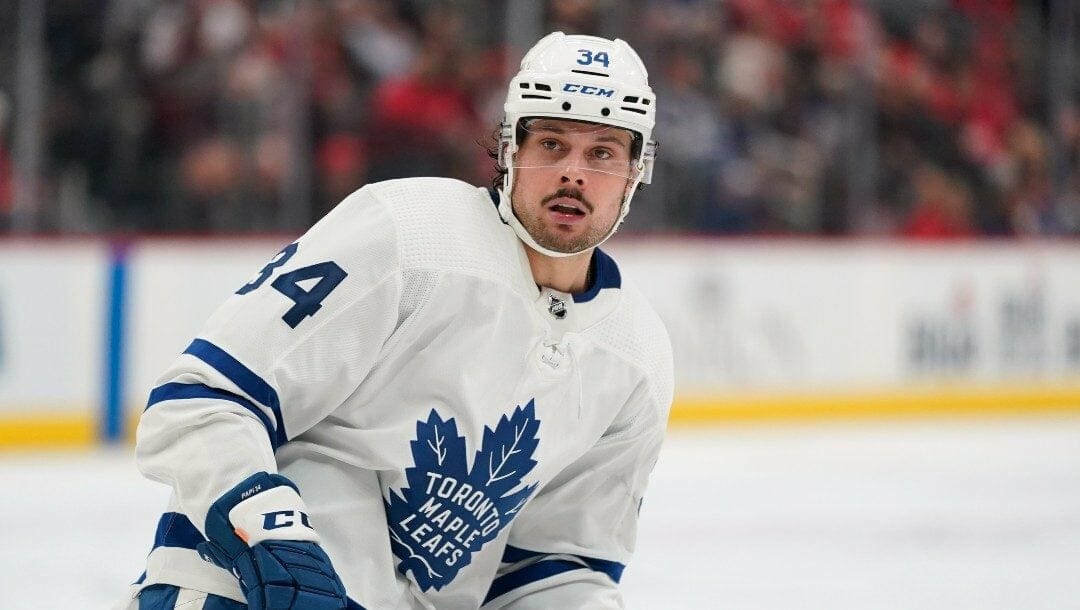 It’s been an interesting last few weeks in the ice hockey betting world with lots of changes to NHL playoff odds, and it’s even impacted some end-of-the-season awards.

One of those awards is the Hart Memorial Trophy, which has had its NHL odds change quite a bit.

Auston Matthews has emerged as a front-runner and Igor Shesterkin could legitimately have a shot despite the rarity of the trophy going to a goalie.

If the Hart Trophy was really about which player is the most valuable to a team’s success, it would always go to a goaltender. Traditionally that is not the case, as a goalie hasn’t won the Hart since Carey Price in 2014-15.

It takes a rare instance when a tender is having a truly spectacular season. But, Igor Shesterkin is having one of those seasons.

The New York Rangers have some serious offensive firepower as Artemi Panarin, Mika Zibanejad, Adam Fox, and Chris Kreider are all having great seasons.

However, the Blue Shirts have some major defensive holes. The Rangers have the sixth-worst five-on-five expected goals percentage at 45.89 and they allow 32 shots on net per game, which is 21st in the league. Of New York’s 41 wins, they’ve only outshot opponents 13 times, while they rank 23rd in net shots per game at -3.2.

Despite the shoddy defensive numbers, Shesterkin leads all goalies with a .936 save percentage and sits third with a 2.11 goals-against average. Of his 42 starts, Shesterkin has won 31 and has only nine regulation losses.

At +350, Shesterkin has decent value for a goalie with a legitimate shot at winning the Hart Trophy.

Matthews is tied for the NHL lead in goals with 47 and he’s played at least six fewer games than any other of the top seven goal-scorers. He has 0.80 goals per game; the closest to him is Leon Draisaitl at 0.71. Only two of Matthews’s goals have been on an empty as well.

He leads all forwards with 71 takeaways, the next closest being Clayton Keller at 59. By season’s end, Matthews will be in contention for the Selke and Richard trophies.

The Toronto center has emerged as not only one of the best goal-scorers but one of the most complete players in the game.

At +150, he is a solid choice to win but requires a little more investment to win big.

Leon Draisaitl is the man who gets no respect.

He’s a locomotive of an offense that cannot be stopped.

However, his teammate is Connor McDavid and Draisaitl will forever play in that shadow.

Draisaitl’s goals should be worth more than McDavid’s assists, but that isn’t how they’re viewed right now.

Draisaitl is sitting at +1200, which is excellent value for a player of his caliber and standing, but he’ll have to outshine McDavid significantly down the stretch.

Connor McDavid is considered the best player in the world and for good reason.

He leads the NHL in points with 97, powerplay points with 38, and points per game at 1.49, while his 35 goals are good for ninth overall. McDavid is every bit the offensive player that Draisaitl is and then some. The only difference is McDavid is more of a facilitator, while Draisaitl is a finisher.

There is one wrinkle in both McDavid and Draisaitl‘s chances. If the Edmonton Oilers miss the playoffs, the likelihood of them winning the Hart trophy significantly drops.

A bet on McDavid or Draisaitl is also a bet on Edmonton.

At +450, McDavid represents excellent value. For most of the season, he was the frontrunner and is blessed with the skill to go on an absolute tear at any time.