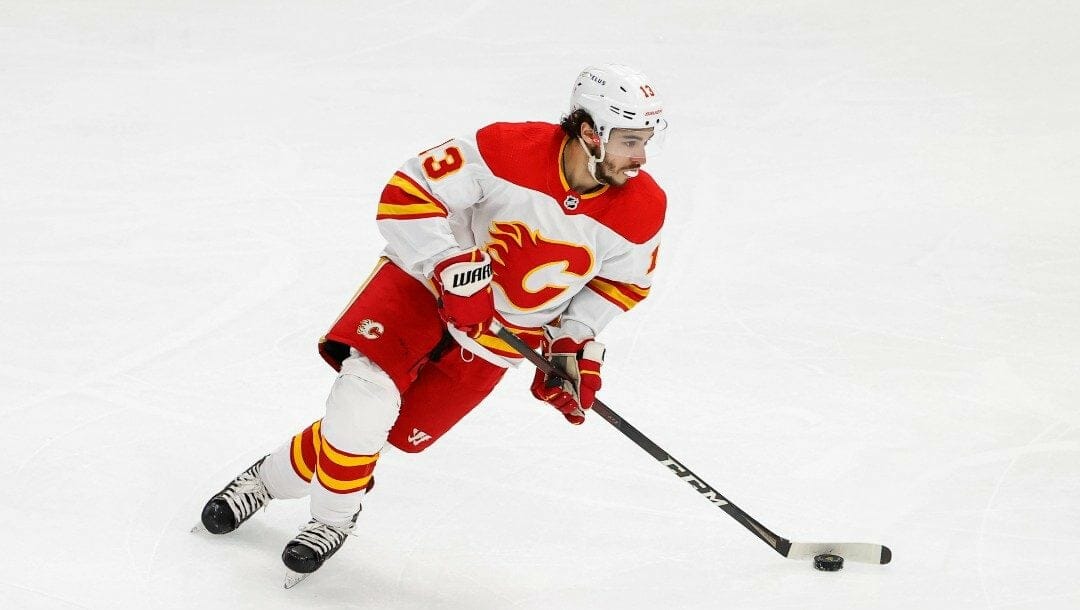 Based on current NHL odds, Johnny Gaudreau is the joint-third favorite to win the Hart Trophy, one of the league’s most coveted individual honors.

Gaudreau, along with Florida’s Jonathan Huberdeau, is currently pegged at +1600 and is undeniably in the hunt to be named MVP.

Toronto’s Austin Matthews is the heavy favorite at -345 to win what would be his first Hart Trophy. At +400, two-time winner Connor McDavid is the second favorite.

While the hype has focussed on Matthews, the award’s most likely recipient, Gaudreau is staking his MVP claim more emphatically with each passing week.

With how he’s been playing of late, voters are being forced to take notice of Gaudreau’s bid, such is the irrefutable nature of his prolific productivity.

There’s ample reason Matthews is the lead horse and everyone else is in the chasing pack.

The Maple Leafs captain recently claimed 51 goals in a 50-game span, becoming the only player since Mario Lemieux in 1995-96 to achieve the rare feat.

And while nobody is questioning Matthews’ headlining credentials, Gaudreau’s productivity and overall influence is just as impressive, if not more so.

Gaudreau has 108 points (38 goals and 70 assists) and is third in the league in scoring, three points behind McDavid and four back of the pacesetting Huberdeau. Gaudreau is five points clear of Matthews, though the Flames forward has also played seven more games.

Most tellingly, Gaudreau has tallied 85 even-strength points, 11 more than Matthews, 13 more than Huberdeau and 17 more than McDavid.

The diminutive Flames forward is the first player to score 85 even strength-points since Jaromir Jagr notched 95 in 1995-96. Only 17 other NHL players have reached that milestone in a single season.

That particular stat shows just how dominant Gaudreau is on a level playing field. He doesn’t need his team to have a numerical advantage to produce awe-inspiring numbers.

Gaudreau also comes up with the goods when it’s needed most.

The Flames superstar has nine game-winning goals, the same total as McDavid and Matthews and two more than Huberdeau.

The superlatives don’t end there for the man referred to as Johnny Hockey.

Gaudreau is currently +61, the most staggering statistic in a long line of eye-popping analytics. He is miles ahead of the other three MVP favorites, with Huberdeau at +39, McDavid at +23 and Matthews at a modest +17.

The last MVP to finish a Hart Trophy-winning campaign at +60 or higher was Wayne Gretzky (+69) in 1986-87, putting into context just how special Gaudreau’s prospective achievement is.

Finally comes an intangible that should carry serious weight when the MVP is eventually announced.

Calgary is the only team of the four with leading MVP candidates that didn’t make the playoffs last season.

Toronto, Florida and Edmonton carried their success from 2020-21 into 2021-22. The contrast between Calgary’s 2020-21 failures and success in the current campaign couldn’t be more stark.

An assortment of contributing factors are responsible for the Flames’ astonishing turnaround, none of which supersede Gaudreau’s implausible ascent. The 28-year-old was 30th in league scoring last season.

Less than a year later, Gaudreau is just four points shy of the league lead and is one of the primary reasons the Flames are a solid futures pick.

The MVP narrative, along with Hart Trophy NHL betting lines, might shift substantially if Gaudreau miraculously wins the scoring title.

Even if he runs out of time and isn’t able to secure the Art Ross Trophy, Gaudreau has a better chance of pulling off the ostensible upset and winning the Hart Trophy than current NHL betting lines suggest.