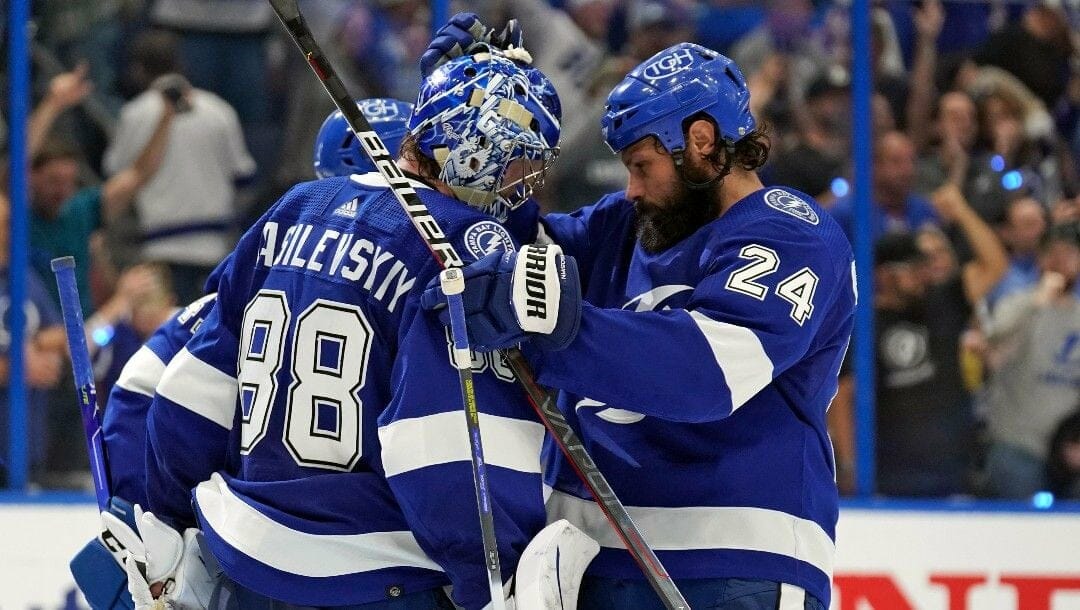 The Tampa Bay Lightning got one past Igor Shesterkin in each period in Game 4 and added an empty netter for good measure, yet again taking care of business on home ice to even the Eastern Conference Final at two games apiece.

With the 4-1 win the Lightning, for the first time since the start of the series, restored their status as favorites to advance. According to NHL betting lines, the defending Stanley Cup champions are -154 favorites, while the Rangers returned to their pre-series status as underdogs, sitting at +130.

Tampa has won six in a row on home ice, tying their franchise record for consecutive wins in their own barn. The Rangers, who failed to score an even-strength goal in Tampa, fell to 2-7 on the road in the playoffs.

As if there was ever any doubt, the Tampa Bay Lightning not only gained parity but also restored confidence and momentum in the emphatic Game 4 victory.

That could spell trouble for a Rangers side that has been struck suddenly and unforgivingly by the injury bug.

Ryan Strome missed Game 4 due to a lower-body injury and the news severely worsened for the Blueshirts when Filip Chytil was forced to leave the game with an upper-body injury.

The Rangers’ solidity down the middle is inescapably linked to having a healthy Chytil and Strome.

Strome kills penalties and is the team’s second-line center, while Chytil, who centers the third line, is third on the team with seven playoff goals, only one shy of the eight he scored in 67 regular-season encounters.

If they’re not able to play in Game 5, it would considerably weaken the spine of Gerard Gallant’s team. The influential pair’s status won’t be known until just prior to game time.

But even if either or both play, one has to wonder how much their respective injuries will hamper their overall effectiveness.

Barclay Goodrow, who reportedly suffered a minor fracture to his ankle in Game 1 against the Pens, again returned to the Rangers’ lineup in Game 4. The same question asked of Strome and Chytil, if they return in Game 5, applies to Goodrow. How much is he suffering and at what percentage of his usual capacity is he able to perform?

There is some good news for the Rangers, who return to Madison Square Garden, where they’ve won eight consecutive playoff games. Their only loss, a triple-overtime thriller, came against the Pens on May 3, the first game of the playoffs.

They’ll need every ounce of that indestructible home confidence to shift the momentum back in their favor.

In Tampa, Shesterkin allowed three goals in back-to-back games for the first since Game 6 and 7 against the Pens. While Shesterkin isn’t showing any disconcerting weaknesses, a few signs of fatigue are creeping into his game.

His rebound control wasn’t quite as tight in Game 4 and he almost seemed unable to contest shooters at the top of the blue paint as easily, especially in the third period. That might just be a temporary byproduct of being shelled in Game 3 to the tune of 52 shots.

Shesterkin, however, is obviously not New York’s problem.

The Rangers, especially on the road, are too reliant on their powerplay, which was responsible for all three goals in the Game 3 and 4 losses.

New York had no issue scoring even-strength goals at home, though, netting eight in Games 1 and 2.

The Rangers will be hoping Madison Square Garden offers the same curing tonic it has for the duration of the postseason.

And if any team can swing the momentum back in their favor, it’s the never-say-die Rangers, who’ve had their backs up against the wall more times during the playoffs than an on-display painting.

However, the Lightning have clearly returned to their championship ways. They dictated the tempo in both home games and appear to have the bit between their collective chompers.

"I really like where our game is now compared to where it was a couple days ago."#NYRvsTBL

Andrei Vasilveskiy stopped 34 of 35 shots for a .971 save percentage. He has allowed three goals in his last two contests and is back to his impenetrable best.

Tampa improved to 8-2 in the playoffs after scoring the opener and head into Game 5 with boundless confidence, momentum, and an air of defiance, anticipant of being the team that puts an end to the Rangers’ eight-game home-winning streak.

Sounds like a storyline tailored for a team chasing their third straight Stanley Cup.

Look for the Lightning to add an empty netter and win the contest by a pair.