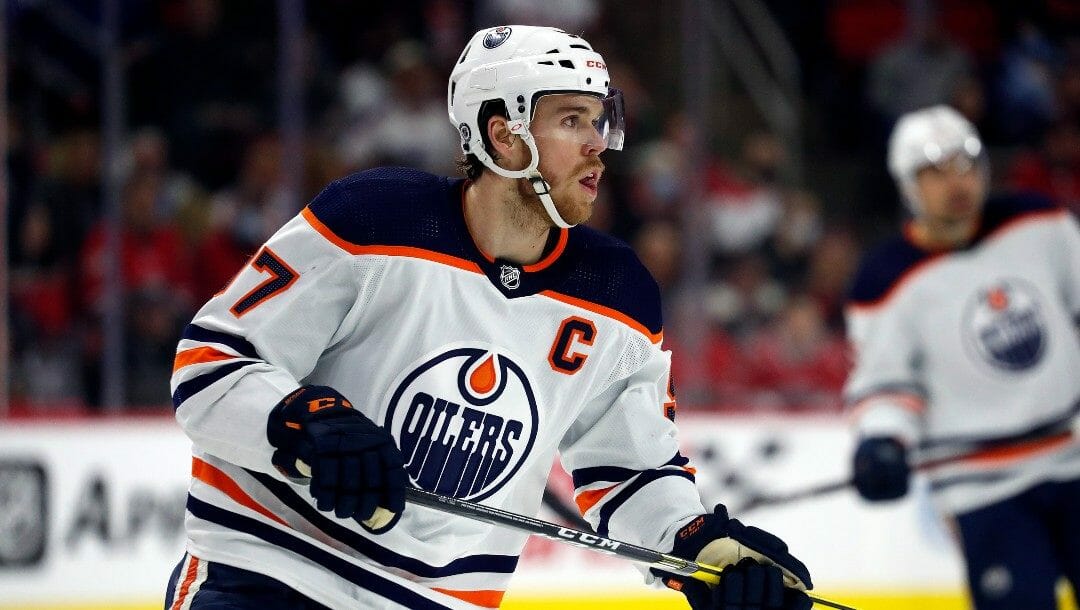 Monday is the NHL Trade Deadline and although most players will remain with their teams for the stretch drive, some will be destined for new clubs, which could certainly impact the Stanley Cup odds.

It’s an important factor to be aware of when making NHL betting picks and selecting player props, as not everyone is guaranteed to be in the lineup when the puck drops on Monday’s four-game slate.

Still, we’ve got you covered with our favorite player props.

The Edmonton Oilers come into Monday’s pivotal Western Conference matchup against the Colorado Avalanche on a five-game winning streak thanks to improved play from reigning Hart Trophy winner Connor McDavid.

We’re betting McDavid continues his hot streak against an Avs team due for a letdown.

There’s a disconnect between Colorado’s 5-on-5 play and outcomes, suggesting that they are due for increased goals-against. The Avs have given up 10 or more high-danger chances in five straight games; however, have allowed just 10 total goals across that stretch.

The three-time scoring leader has found the back of the net in five straight games, accumulating 11 points total. The Oilers continue to deploy McDavid in high-leverage situations, giving him 67.5% of his starts in the attacking zone and skating him more than 21 minutes in nine of his past 10 outings.

No team has had an answer for McDavid recently, and we’re not expecting an Avalanche squad hemorrhaging chances to slow him down. McDavid at +130 as an Any Time Goal Scorer and Over 0.5 points are worth the investment.

The Vegas Golden Knights are back on the road for Monday’s Western Conference matchup against the Minnesota Wild.

The Knights are struggling as the visitors over their recent sample, dropping seven of their past 10 decisions. However, we’ve seen improved performances from William Karlsson, suggesting he’s a value play as an Any Time Goal Scorer and to go over his 0.5 points prop.

The Swedish forward has played an increased role for the Knights over his recent sample, seeing 19:56 of ice time or more in three of his past four games while putting up multi-shot efforts in two of those games.

Karlsson is the quarterback on Vegas’s top powerplay unit and centers its first line, giving him plenty of opportunities with the best skaters. More productivity hasn’t resulted in increased output yet, but some underlying metrics support that Karlsson is due for a breakout.

Karlsson is well below his expected output this season. So far, he’s been on the ice for 44 goals below his expected 55.5 total. Similarly, he has an on-ice shooting percentage of 7.7%, dropping his PDO down to 0.957, the worst on the team.

In reconciling Karlsson’s production with his output, it’s evident that we should see him have some puck luck over his coming games. We’re betting that starts against the Wild.