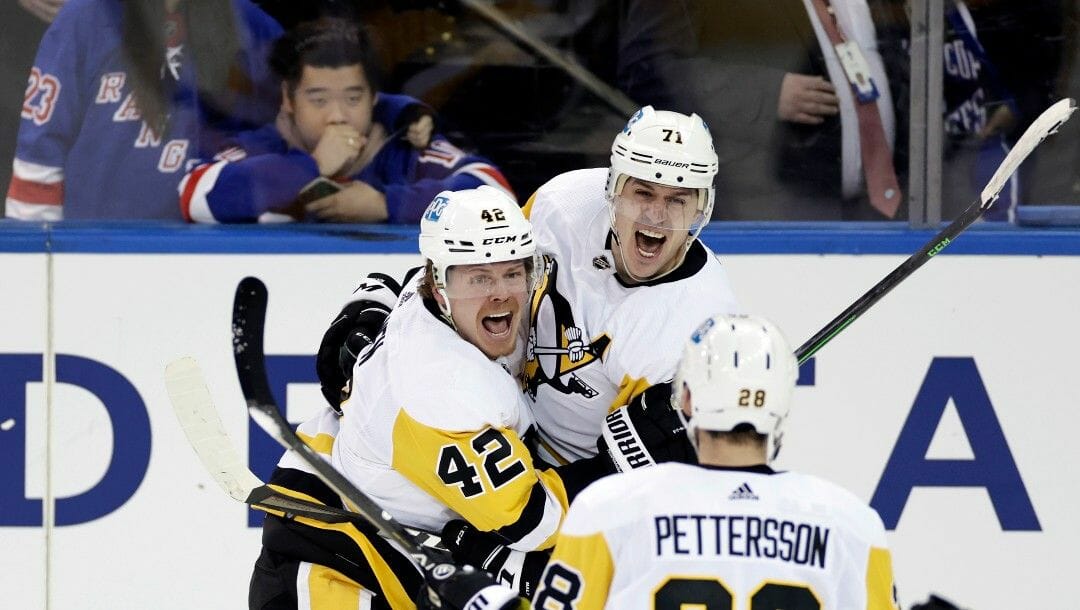 It’s hard to imagine a more exciting Game 1 in the NHL playoffs, which gave plenty of chances for NHL betting, especially live betting.

Game 1 had the Pittsburgh Penguins and New York Rangers needing three overtimes to decide a winner. It took a tip from Evgeni Malkin to solve Igor Shesterkin in the third overtime, which was the longest game in Madison Square Garden history.

Below are NHL betting picks and analysis for Thursday’s Game 2.

The Penguins entered Game 1 without their starting goaltender Tristan Jarry, so Casey DeSmith was called on to step in. DeSmith made 48 saves but had to leave due to a lower-body injury in the second overtime period.

The Pens had to turn to Louis Domingue to close out the game. He made all 17 saves and helped Pittsburgh pick up the win. Jake Guentzel scored two goals and again showed why he is criminally underrated.

Meanwhile, the Rangers showed everyone just how much they rely on Shesterkin’s play.

Shesterkin made 79 saves, only six short of the record for one game. However, it took five overtimes for Joonas Korpisalo to record 85 saves and Shesterkin was approaching it in three. New York was outshot 83-68, but Chris Kreider scored a shorthanded goal to force the game into overtime.

Despite losing, this game was one of the great goaltending performances of all time. According to Natural Stat Trick, the Penguins expected goals for Game 1 was 8.99. Shesterkin prevented nearly five more goals than he was supposed to.

As I said before, the focus of this game and this series should be on Shesterkin. He looks locked in and is a real threat to steal matches to keep the Rangers competitive, even if they shouldn’t be.

New York needs to respond in Game 2 and get the win for their goalie that they should’ve picked up in the first game.