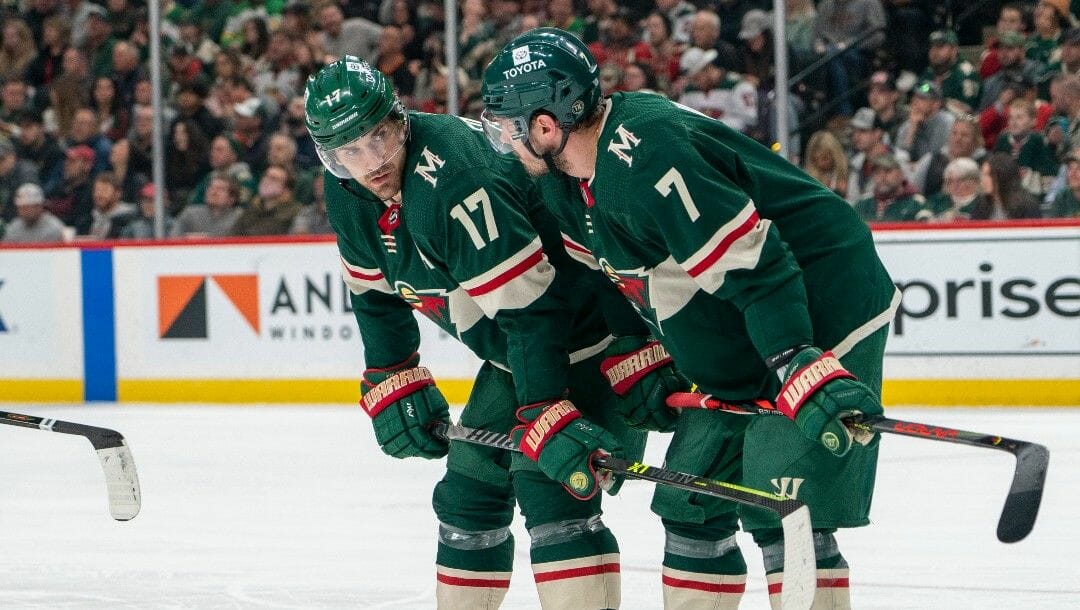 Two of the hottest teams in the league get set to do battle in the first round of the NHL playoffs, as the Minnesota Wild will take on the St. Louis Blues in a Central Division showdown.

NHL playoff odds have the Wild as -164 favorites to oust the Blues, currently pegged as +135 underdogs. Neither team, considering they have the two best records in the NHL since April 7, will fancy facing each other in the opening round.

The Wild have amassed 22 points with a 10-1-2 record, the most in the NHL during that time frame. St. Louis isn’t far behind, taking 19 points (9-2-1) from a possible 24. The Wild have lost just three games since April 7, two of which to St. Louis in three-on-three overtime.

While the Blues have been sizzling hot since, the Wild’s scintillating league-best form dates even further back, to March 1.

This fascinating first-round matchup will be decided by a few key variables. No matter which team prevails, expect a long, tightly contested series, which will be great for NHL betting.

The Blues won all three contests against the Wild this season.

The first, a 6-4 triumph on Jan. 1, came on New Year’s Day in Minnesota, when the two sides battled outdoors in the Winter Classic.

There is a pronounced asterisk above their first encounter, as it was played outdoors at Target Field, where the temperature was below zero prior to the opening face-off.

Both teams had to endure the coldest outdoor game in NHL history.

While it will go down in the record books as a home loss for the Wild, it was by no means a customary defeat, nor did it occur at Xcel Energy Center, where the Wild enjoyed the league’s third-best home record (31-8-2) (31-7-2 if you take away the Winter Classic defeat).

The Blues’ second and third wins came at home, where they managed to upend a Wild team in formidable form. Aside from a peculiar home defeat to the lowly Coyotes, St. Louis is the only team to beat Minnesota since April 7.

St. Louis scored first in all three regular-season victories. Outside of their head-to-head matchups, there wasn’t much to choose between how often each team scored first, with the Wild netting the first goal 45 times and the Blues 42.

Aligning closely with their season trend, the Blues dominated the second period in the three contests, outscoring Minnesota 8-4. Craig Berube’s team scored 124 goals in the middle frame this season, the most in the NHL.

Why Playoffs Will Be Different

Having home-ice advantage in the playoffs can be both a blessing and a curse depending on the year and the team in question.

The following year’s playoffs were held in the bubble, so home records were non-existent. In last year’s playoffs, the home teams were 48-38, with home favorites enjoying a 31-21 record.

While some teams succumb to the pressure of being home favorite, the Wild don’t look like they’ll fall into that category.

Minnesota had the third-best home record (31-8-2) in the NHL. The Blues were the ninth-best on the road (23-12-6). That disparity is even starker when you consider St. Louis’ inability to win one-goal games. The Blues owned the unenviable fourth-worst record in one-goal contests, winning just 36% of such games.

The Wild are on the polar opposite side of the spectrum, winning the fourth-best 67% of one-goal games.

Paradoxically, the Blues defeated the Wild in two one-goal games in April. Unless the Blues are the Wild’s bogey team, expect that trend to reverse.

Goaltending will also prove instrumental in deciding the outcome of the series. Minnesota played all three games against the Blues without Marc-André Fleury’s services.

Cam Talbot underperformed against the Wild’s division rivals, failing to manage a save percentage of over .857 in any of the three contests. He was also pulled in the Winter Classic.

With a 9-2-0 record and a .910 save percentage, Fleury is steaming hot since joining the Wild. He also brings a wealth of experience and three Stanley Cup rings to the fold, providing his new side with a steady set of pads to navigate the NHL’s most difficult terrain.

Minnesota, even with Ville Husso’s outstanding play since taking over the No. 1 role in St. Louis, has the advantage between the pipes.

The Wild must stay out of the box to prevail. They were the third-most penalized team, spending an average of 10:45 in the sin bin each game.

The Wild had a woeful 25th-ranked penalty kill, compounding their lack of discipline.

As if Minnesota needs any further reason to stay out of the box, St. Louis had the league’s second-best powerplay (27%). The Blues also enjoyed success against the Wild, going 3-for-9 with the man advantage in three contests.

The Wild suffered a disconcerting injury setback to Nicholas Foligno in their meaningless win over the Avalanche on Friday.

There is no word whether Foligno will feature in Game 1 or the series. He is the Wild’s most physical forward and offers innumerable intangibles so often vital in a team’s playoff success.

Minnesota, however, is deep enough to get by St. Louis without Foligno.

If the Wild get ace goaltending from Fleury and stay out of the penalty box, they’ll prevail in six games against a Blues side who rely too heavily on special teams productivity, an unproven goaltender and an overachieving, even opportunistic offense.