Stanley Cup Betting: Do Lightning Have Chance vs. Avalanche? 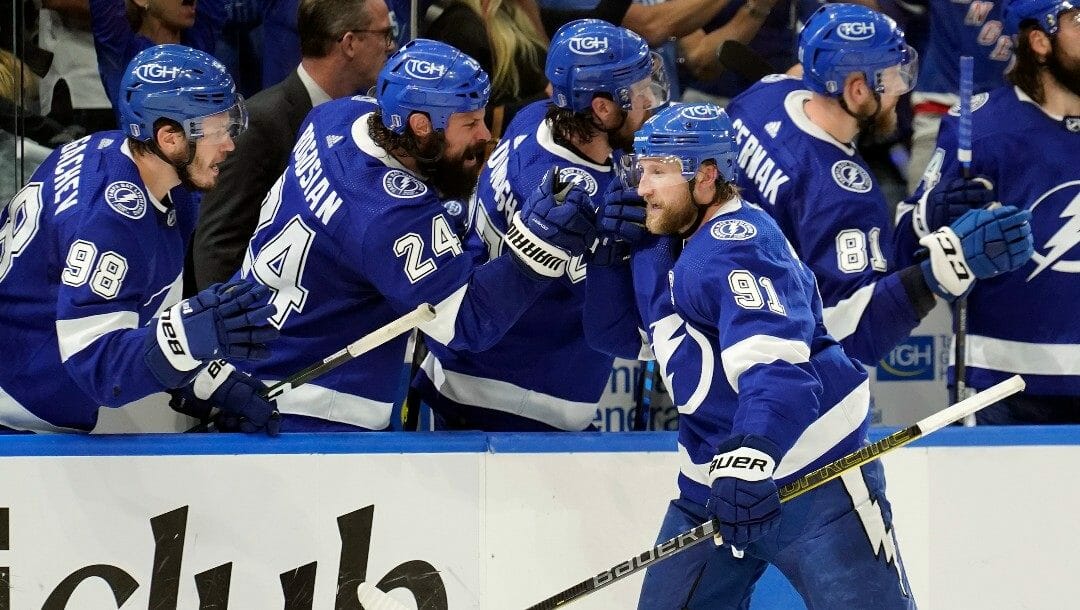 The Tampa Bay Lightning will continue their quest for a third straight Stanley Cup win.

Stanley Cup odds have them as +155 to beat the Avalanche.

The Lightning are staring down history as only two NHL teams have won three consecutive Cups since 1967, the Montreal Canadiens between 1976 and 1979 and the New York Islanders from 1980 to 1983. Those teams won four in a row, but the field is larger now and much more talented. Not even the great Wayne Gretzky-led Edmonton Oilers or Mario Lemieux-led Pittsburgh Penguins teams managed to win more than two consecutive Stanely Cups.

Below, we’ll look at how the NHL odds have shifted for Tampa Bay and analyze how they stack up to the competition.

The Lightning’s biggest elimination scare came in their first-round matchup with the Toronto Maple Leafs. The talented Toronto team took Tampa Bay to Game 7, but the Bolts proved that playoff experience is worth its weight in postseason wins. After a shaky start to the series, Andrei Vasilevskiy shut the door on the Leafs, limiting their offense to only one goal in that elimination game.

The Lightning never lost two games in a row against the Leafs, alternating wins and losses until the final deciding match. Furthermore, Tampa Bay won 17 straight games following a loss over the past three postseasons until its Eastern Conference Finals series against the New York Rangers this season. The Leafs didn’t only scare the Lightning; they scared the oddsmakers, too. Tampa Bay’s odds moved from +750 to +1100 in the first round.

The second round saw the Bolts’ odds to win the Stanley Cup shift to +650 because the Eastern Conference was still left with some heavy hitters.

The gauntlet of great offenses didn’t stop with the Leafs, as the Lightning had to face the best regular-season offense next. Putting “regular-season” in front of that statement about the Florida Panthers is crucial because their offense completely dried up in the second round. Tampa Bay held its interstate rivals to only three goals in four games, sweeping the promising Panthers right out of the playoffs. After destroying Florida, the Lightning’s odds improved to +450.

Compared to the Leafs and Panthers, the Rangers didn’t look like a serious threat to the Lightning. However, the hockey world learned that New York was to be taken seriously.

The Rangers won both of their home games to open the series, and the Lightning finally lost two consecutive games in the postseason. Despite the early scare, Tampa Bay strapped in and won four straight to knock the Rangers out in six games.

The Bolts were also able to overcome the Rangers’ best weapon, Igor Shesterkin.

Among goalies that played at least eight games, Shesterkin led with a .929 save percentage, and his 2.59 goals-against average was third, only trailing Antti Raanta and Vasilevskiy. Meanwhile, Vasilevskiy is second with a .928 SV% and second with a 2.27 GAA. Heading into the Stanley Cup Final, there is no question that Vasilevskiy is the best goalie remaining.

Through 17 games, Nikita Kucherov has reasserted himself as a threat, sitting fifth in scoring with seven goals and 23 points. Steven Stamkos has continued his excellent season into the playoffs, leading Tampa in goals with nine.

The Lightning have also received scoring throughout their lineup. Ondrej Palat’s postseason goals are becoming legendary, and he’s right behind Stamkos with eight in these playoffs. Ross Colton and Corey Perry both have five goals. They didn’t score in the Rangers’ series, but their goals against Florida and Toronto were timely and essential. Among defensemen, Victor Hedman is third in scoring with two goals and 14 points. Only the two young superstars, Adam Fox and Cale Makar are ahead of him.

Every round the Lightning play, the stronger they get and the more like destiny this run looks. Tampa Bay has been there before, winning back-to-back Stanley Cups, and they have all the tools to three-peat. The Bolts enter the Stanley Cup Finals against the Colorado Avalanche as underdogs at +155 to win it all.