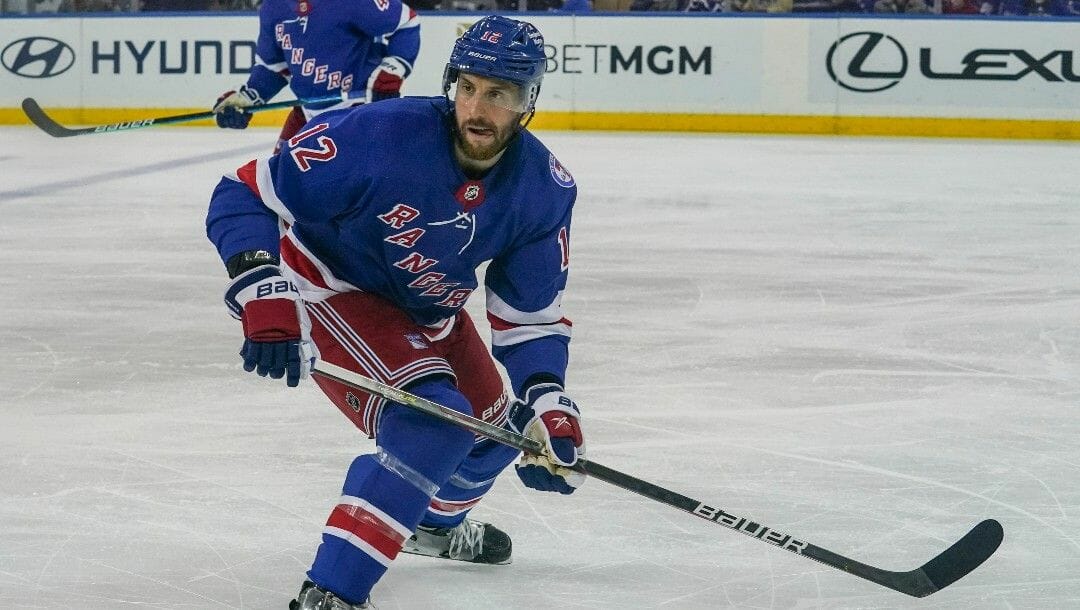 It’s strange to think that two of the hottest teams in the NHL, both with over 100 points and climbing, are seen as sleeper futures picks in NHL betting.

The handful of elite teams thought of as primary contenders have taken the spotlight off the St. Louis Blues and New York Rangers, sleepers whose NHL playoff odds offer excellent value.

The Blues (+2500) and Rangers’ (+1600) current futures NHL odds become increasingly enticing the more you learn about them.

Both teams, over recent stretches of slightly differing timeframes, have made comprehensive cases as to why they deserve your futures consideration.

The Blues have the fifth-longest NHL playoff odds of the 16 playoff teams, but you wouldn’t know it by the way they’ve acquitted themselves lately.

Since April 1, St. Louis, with a 9-0-1 record, is the hottest team in the NHL and are outscoring opponents 49-22 during the formidable streak.

That’s when netminder Ville Husso unseated a struggling Jordan Binnington for the No. 1 role. The 27-year-old netminder, with a 24-6-0 record, hasn’t looked back since.

He has the eighth-best goals against average (2.44), level with Antti Raanta, and a share of the fourth-best save percentage (0.923) with Jakob Markstrom.

However, the Finnish netminder is an unknown commodity in the NHL playoffs, so time will tell if he’s up to the pressure that awaits.

Husso isn’t the only reason the Blues are surging at precisely the right time.

However, the Blues are facing one unsettling trend as the playoffs inch closer.

Perplexingly, St. Louis is the third-worst team in the league in one-goal contests (9-7-10), with a grossly subpar .346 winning percentage.

In St. Louis’ defense, 10 of 17 one-goal defeats occurred in three-on-three overtime or by way of a shootout, not exactly the best reflection of a team’s capabilities in tight affairs.

St. Louis still has 13 players from their 2018-2019 Stanley Cup-winning team, so bettors should feel confident in their ability to solve the one-goal games conundrum.

That, along with the collection of aforementioned reasons, underpins the tasty nature of St. Louis’ current +2500 NHL playoff odds.

While the last two months fortified their status as a Stanley Cup sleeper, the Rangers have performed admirably throughout the 2021-2022 campaign.

Of all those distinguished statistics, their miserly defensive record is the most imposing. The Rangers have the second-best goals against average (GAA) in the NHL, allowing just 2.47 per game. Only Carolina (2.43 GAA) concedes fewer goals.

That stingy 2.47 GAA is mostly thanks to the invulnerable form of Igor Shesterkin. The Rangers’ ace between the pipes is almost a shoo-in, with current odds of -1000, to win the Vezina Trophy.

He leads the league in GAA (2.05), save percentage (.935) and is third in shutouts with five. Shesterkin has 35 wins and is just two behind frontrunner Juuse Saros, who has played 14 additional games. With only 50 games under his belt, there is absolutely no concern of potential burnout in the postseason.

Shesterkin has the ability, confidence and composure to not only steal a game, but potentially an entire series, exponentially enhancing the Rangers’ chances of pulling off the improbable.

And unlike the Blues, the Rangers have the seventh-best winning percentage (.636) in one-goal contests.

If Shesterkin maintains his otherworldly form going into the playoffs, the Rangers’ +1600 NHL playoff odds, aside from the killer profits you’ll earn if they pull it off, seem somewhat insignificant.