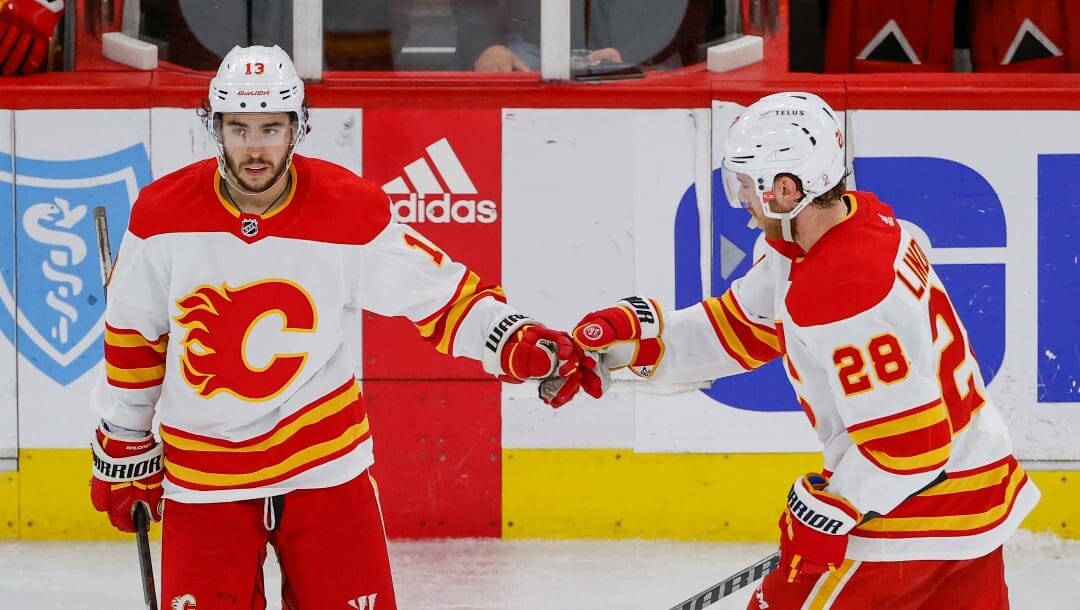 Entering the postseason as +900 third favorites, based on current NHL odds, The Flames are accompanied by endless supporting evidence to back their claim on Lord Stanley.

It’s been 33 long years since the Flames last won the Stanley Cup. The current campaign inarguably represents the best chance, including their improbable run to the 2004 finals, for Calgary to end the seemingly never-ending drought.

The Pacific Division winners have no conspicuous weakness and are built for a long, fruitful playoff run. Both the stats and intangibles they possess support their Cup chances.

The list of stats that embolden Calgary’s claim to win their first Stanley Cup since 1989 continually grows.

The Flames have never had such an extended list of players enjoying career-best seasons. We’d be here all night if we detailed each of the 11 players on the list who’ve secured career-best point totals. Eight of those players have also eclipsed previous bests in goals and plus/minus ratings.

Nobody on that list is more high profile than Johnny Gaudreau, whose NHL odds place him as third favorite to win the Hart Trophy. Momentum behind Gaudreau’s MVP claim is picking up steam, with Gaudreau’s NHL betting lines shifting in recent days from +1600 to +1200.

Gaudreau, who has 86 even-strength points, is ripping teams apart 5-on-5 and is third in scoring with 108 points. Linemate Matthew Tkachuk, another Flame with career highs in points, goals, assists and plus/minus, is seventh in scoring with 101 points.

We’d be remiss not to highlight Jacob Markstrom’s immense influence. Although the Swedish netminder is the second favorite with +1200 NHL odds to win the Vezina, he’s not Calgary’s most valuable player, reinforcing just how dominant a season the Flames have thus far enjoyed.

Markstrom is third in goals against average (2.21), tied for third in save percentage (.922) and sits atop the shutout list with nine goose eggs. That is one shy of the franchise record of 10, set by Miikka Kiprusoff in 2005-06.

The Flames have allowed 135 five-on-five goals but have an expected goals against of 141.95, showcasing Markstrom’s influence in preventing the opposition from scoring as much as they should.

Head coach Darryl Sutter will be the first person to say that team honors supersede individual accolades, but the sheer abundance of Flames enjoying career-best years is directly correlated to their resounding team success.

Calgary is the most dominant NHL outfit since Jan. 15. Their 32-9-4 mark has the Flames firing more so than any other NHL team heading into the postseason. During that time frame, the Flames are level with Colorado as the league’s most watertight defense, allowing just 2.42 goals per contest.

In regards to the full campaign, the Flames are exalted for having the league’s second-best goals percentage, 58.72. That is only a hundredth of a percent behind Florida’s 58.73.

That means Sutter’s team have scored 58.72% of all the goals, both for and against, in Calgary games. In terms of Calgary’s pervading dominance this season, we’ve barely scratched the surface.

The Flames seldomly allow high-danger chances, one of innumerable reasons Markstrom’s numbers are breathtakingly superior to most NHL netminders. According to Moneypuck.com, the Flames have conceded 116 high-danger shots, the sixth fewest in the league.

More so than any other team, Calgary’s playoff success will depend on how quickly they burst out of the gate. Like a gasoline-induced wildfire, Calgary is renowned for starting quickly, scoring 91 first-period goals while allowing just 51, good for a league-best +40 differential.

The Intangibles That Put Calgary Ahead of Other Futures Picks

While they can’t be quantified as percentages or displayed nicely on a chart as concrete analytics, the Flames are also in pole position on the intangibles front.

Sutter has been in charge of the Flames for just over a year. Thanks to his perfectionist, uncompromising philosophy, he has built a blue-collar culture of hard work, unparalleled intensity, and inescapable accountability.

Nothing is ever good enough for the bench boss who won two Stanley Cups with Los Angeles. He’s holding his top players to account, which rarely happened prior to Sutter’s second reign in Calgary.

General Manager Brad Treliving also deserves plaudits for slowly building and fostering a winning culture. Prior to the start of the 2021-22 season, Milan Lucic was the only Flames player with a Stanley Cup ring.

Calgary has four Stanley Cup winners on their roster, including Blake Coleman, Tyler Toffoli, Trevor Lewis and the aforementioned Lucic. Not to mention their head coach, who has returned to Calgary with a point to prove.

And who dares stand in his way?