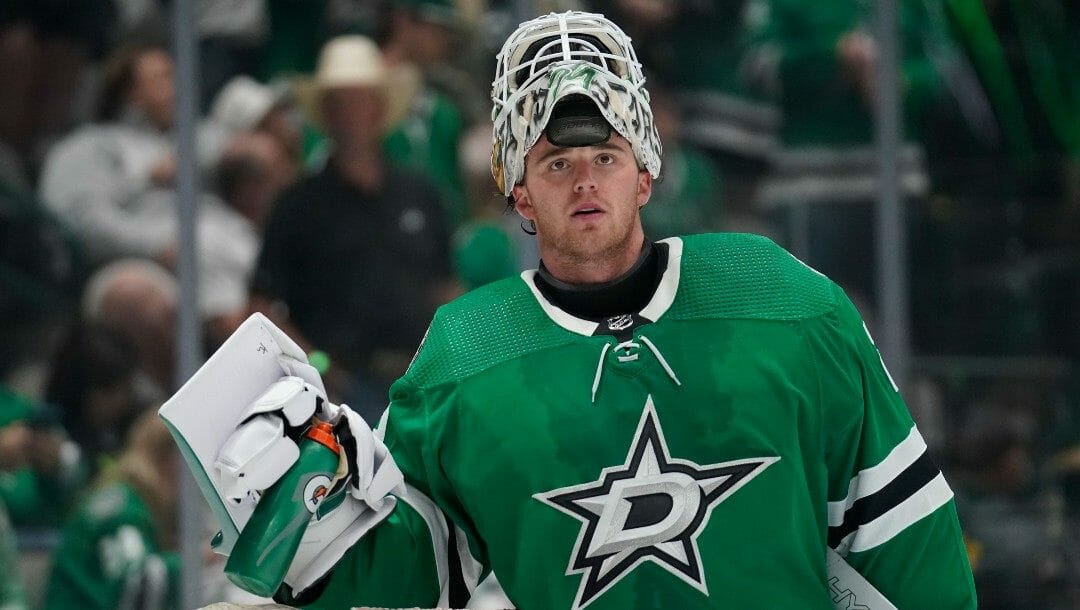 The Flames peppered Jake Oettinger with a franchise-best 54 shots in their 4-1 Game 4 win, leveling the series at two as proceedings shift back to Calgary.

NHL playoff odds for the series have once again shifted, restoring the Flames as heavier -263 favorites. The Stars are pegged as +210 underdogs, a slight improvement from their +250 status prior to Game 1.

If you’re looking for a metaphor to paint the canvas of the Flames’ Game 4 victory, think of a lumberjack chopping down a gigantic fir tree with nothing more than a hand ax. Oettinger, who finally indicated that he is human after all, was the exposed, defiant fir tree.

Below are NHL betting picks and analysis for Wednesday’s matchup.

The Flames scored three goals — one into an empty net — in the third period, as many as they had in the previous three games. And maybe most importantly, MVP candidate Johnny Gaudreau scored a beauty on a rare postseason penalty shot. It was his first goal of the series and first playoff game-winner.

When the puck slid between Oettinger’s legs and into the back of the net on Gaudreau’s nifty deke, you could almost hear the city of Calgary exhale restoratively as a collective.

The improvement in Game 4 was even more pronounced, as the regular-season version of the Flames returned. In this case, desperation bred excellence.

The Flames created bundles of chances in Monday’s Game 4, finishing with an expected goals tally of 6.33, almost triple their Game 3 output.

The Game 4 win is the least the Flames deserve after dictating play for most of the rugged, tight-checking series. While Oettinger was again in almost invincible form going into the third period, take nothing away from Jacob Markstrom’s performance at the other end.

The headline story of the series has thus far focused on Oettinger’s unexpected stellar play. All the while Markstrom has played almost as well, albeit with a lesser workload and in a more unheralded fashion.

Markstrom enters the crease on Wednesday night with a superlative .952 save percentage, trailing only the 23-year-old puckstopper at the opposing end of the rink. Oettinger goes into Game 5 having saved a staggering 96% of the shots he’s faced.

This series between Western Conference foes is indisputably the closest and most defensive of all first-round bouts. However, there are distinct indications that Calgary is emerging from its fleeting offensive coma.

The Flames’ third-period outburst could be a sign of things to come. However, too many people repeatedly discount Dallas. The Stars are a resilient bunch who, like their fir-tree of a goaltender, do not easily waver.

The Stars, statistically speaking, also had their best offensive game of the series on Monday, repeatedly calling on Markstrom to show why he’s in the running to win the 2022 Vezina.

With 3.81 expected goals, Dallas forced Calgary’s netminder into a few pivotal, game-deciding saves before the away team broke it open in the third.

The first three games saw Rick Bowness’ team drag the Flames kicking and screaming out of their groove, pulling them into after-whistle shenanigans and extracurricular activities. The strategy worked wonders, as it distracted Matthew Tkachuk, Rasmus Andersson and others.

Returning their steely focus to the uncompromising task at hand, it looks like the Flames have finally learned their lesson.

The other looming question is whether the bubble has finally burst where Oettinger is concerned. After seeing his poise, athleticism, lightning-quick reactions and unwavering nerves unerringly on display from the first four games, I’d say that bubble isn’t bursting anytime soon.

Expect the Flames to raise the bar even higher on Wednesday night, though Dallas will not go silently into the Calgary night. The Flames should prevail, probably by two goals, in an even more expansive Game 5.