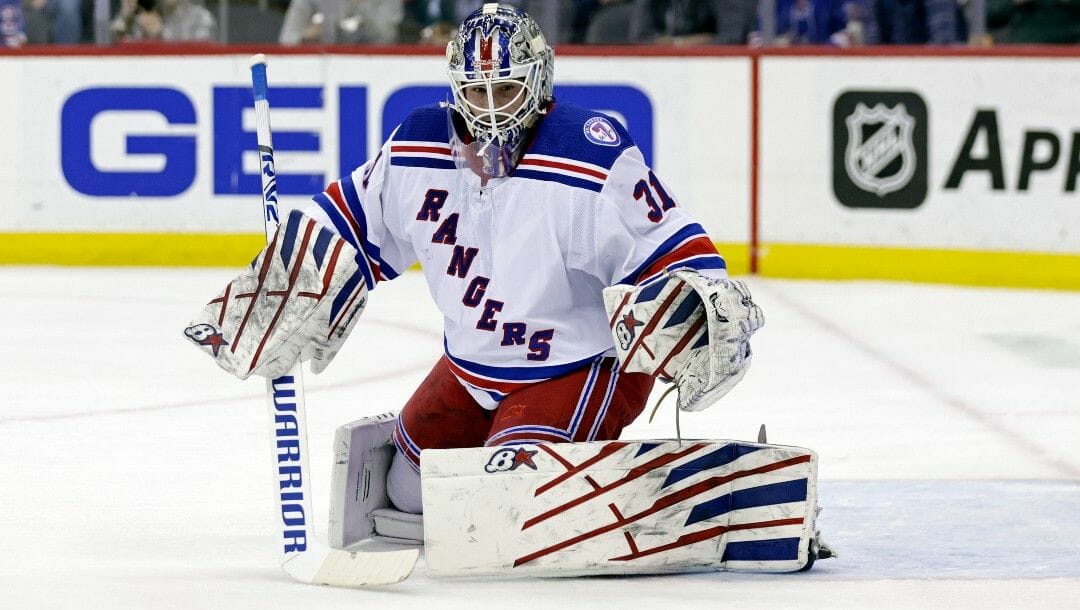 The NHL regular season is nearing its end, which means it’s time to start taking a closer look at Stanley Cup odds and NHL playoff odds.

That also means time is running out for betting regular-season awards, including the Vezina Memorial Trophy (best goaltender).

Looking at the NHL odds, the Vezina race looks pretty much decided, but a few possible candidates could swoop in and steal the show at the last minute.

Igor Shesterkin has been the runaway favorite for quite some time, but Jacob Markstrom and Frederik Andersen are keeping pace.

Igor Shesterkin knows how to win. Of the New York Rangers’ 41 wins, Shesterkin accounts for 31 of them and he’s only lost nine games in regulation this season.

Shesterkin’s .936 save percentage leads all goalies and his 2.11 goals-against average is third. What makes Shesterkin stand out, even more, is the poor defensive play in front of him.

Over his past six games, he has had three subpar performances. He allowed four or more goals in three of those games, but these are only of note because the rest of his season is impeccable.

Unfortunately, those performances may have cost Shesterkin a shot at winning the Hart trophy, but the Vezina is all but his at this point.

At -450, it’ll require a large wager to win any significant amount of money, as he’s all but won the Vezina already.

Igor Shesterkin is not human pic.twitter.com/D1TPEHg1PZ

Jacob Markstrom is a sneaky pick. He’s having a great year, and the Calgary Flames are second in the West because of it, but not many people are talking about his play.

Markstrom leads all goalies in shutouts with nine, he’s tied for fourth with a .926 SV%, and his 2.16 GAA ranks fourth. Markstrom is also carrying a heavy workload, starting 51 games and recording 31 wins. He’s been solid down the stretch, recording only one regulations loss in his past 11 games.

At +500, Markstrom is an under-the-radar gamble that could pay off.

Frederik Andersen’s numbers are comparable to Shesterkin’s, but he’s playing behind a better team and a superior defensive core. Unfortunately, the strength of his team will affect the perception of his performance; that’s just the reality.

Andersen has 31 wins, the third-best SV% at .926, and the best GAA at 2.07. This season, Andersen has yet to allow more than four goals in a game and has only allowed the puck to find the back of the net four times in five outings.

It won’t help him win the Vezina, but Andersen also leads all goalies with four points. He has been the picture of consistency and at +1200, represents huge value potential. If Shesterkin faulters a few more times having a bet on Andersen could pay off.

This season, Vasilevskiy is tenth in SV% at .920, and his 2.39 GAA ranks eighth. He’s tied for the most wins with Tristan Jarry and has played the sixth-most games at 50.

Vasilevskiy is a workhorse and is always in the Vezina conversation. However, it doesn’t look like he’ll be able to take the trophy home with so many stellar performances this season.

Vasilevskiy at +1600 seems like a steal but it’s too late in the season for him to bring home the hardware.