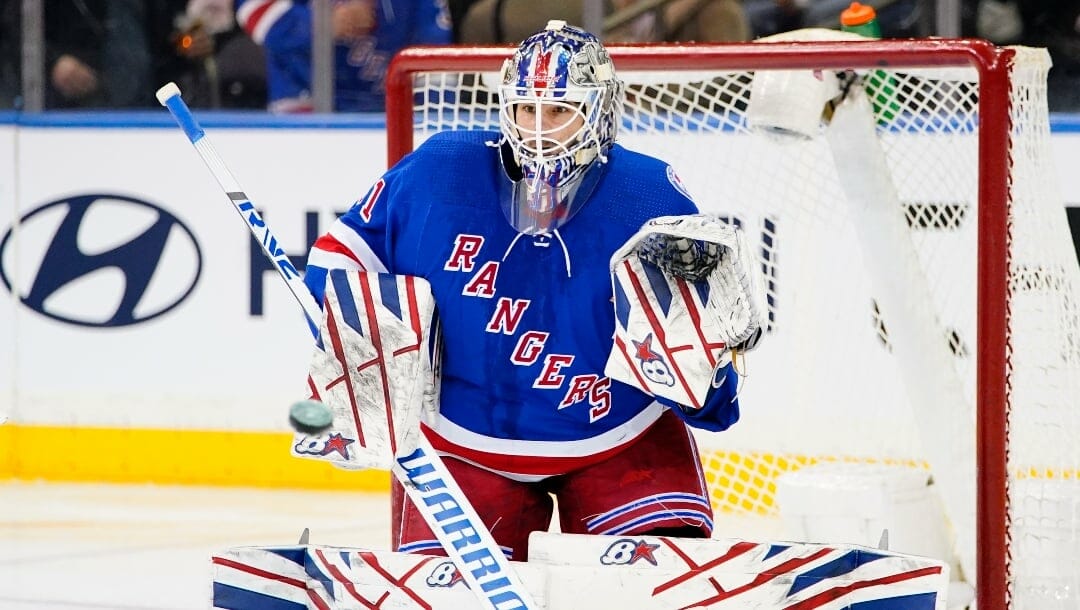 NHL odds for the 2022-23 Vezina Trophy candidates are fresh off the press, and each of the five favorites have compelling reasons to believe they can win the acclaimed trophy.

Only two of the five , Vasilevskiy and Shesterkin, are former winners, with the latter securing last season’s Vezina. The NHL hasn’t seen a back-to-back Vezina Trophy winner since 2007 and 2008 when Martin Brodeur did the double.

Vasilevskiy is the only netminder on the exclusive list who has won the Vezina and the Conn Smythe.

Here’s a look at the five Vezina Trophy favorites’ respective chances of being named the world’s best goaltender.

The Stars’ netminder showcased his skills against the Flames in the first round of the 2021-22 playoffs. The 23-year-old put on a clinic, making the most scrutinized position look like baby’s play.

He played 48 regular-season games before his maiden playoff hockey foray. You wouldn’t know it was his first taste of playoff action by the way he effortlessly stymied one of the league’s most prolific offenses.

Oettinger finished the seven-game series against Calgary with a 1.81 goals-against average (GAA) and a .956 save percentage, stats that would gratify a Vezina winner. The Stars  rewarded Oettinger’s playoff heroics by handing him the starting role. The 2022-23 campaign will mark his first in the NHL as a No. 1 netminder.

Expecting a first-year starter to compete for the Vezina Trophy would be aspirational, even outlandish, under ordinary circumstances. However, Oettinger is capable of consistently playing at an elite level. He is composed beyond his years and has an uncanny ability to find the puck, making otherworldly saves look ordinary.

At +1800, Oettinger offers exquisite value. While Oettinger should win a Vezina at some point in his career, it probably won’t happen for another two or three seasons.

A finalist for the 2021-22 Vezina Trophy, Juuse Saros is back among the favorites for the 2022-23 campaign. The 27-year-old netminder was the main reason Nashville qualified for the 2021-22 playoffs. The Preds were forced to play without their MVP against the Avs after Saros suffered a season-ending ankle injury, all but guaranteeing a swift first-round exit.

Entering his eighth NHL campaign, 2022-23 will mark just the second time Saros is expected to carry the bulk of the workload. If he can show further improvement after a stellar 2021-22 season, Saros has every chance of claiming his first Vezina.

However, proceed carefully.. There’s a good chance he hit his ceiling last season. If that’s the case, Saros is the least likely of the five to win the extolled honor.

Like Oettinger, the 2022-23 campaign will mark Ilya Sorokin’s third in the NHL. In 52 games last season, he had a 2.40 GAA, a .925 save percentage, and seven shutouts. His GAA was fourth best, while he had the second-best save percentage and second-most shutouts.

Sorokin is 27 years old and perfectly positioned to improve on last season’s numbers despite his relative NHL inexperience. Sorokin, along with Oettinger, is the most unheralded and unassuming name of the five favorites. This won’t be the case for too much longer if he continues his upward trajectory.

The Islanders allowed the seventh-fewest goals last season and are a sound defensive team even without Sorokin’s stabilizing presence between the pipes. That bodes well for Sorokin, who should ascend to loftier heights in the coming seasons.

Look for Sorokin to be named as one of the three 2022-23 Vezina finalists.

The 2019 Vezina and 2021 Conn Smythe winner is only 28 years old. That’s staggering considering how much he’s already accomplished. Expect to see Vasilevskiy’s name among the Vezina favorites for years to come. Tampa’s most prized asset, which says a lot with Nikita Kucherov, Victor Hedman, and Steven Stamkos in the mix, is primed for an exquisite campaign.

Vasilevskiy isn’t the type of person to underperform in successive seasons. I use the word underperform lightly and in context, as most of Vasilevskiy’s 2021-22 numbers were still among the league’s top 15.

Nobody in Tampa’s camp was concerned with Vasilevskiy’s 2021-22 regular season, especially after watching him perform wondrously throughout Tampa’s Stanley Cup Final run.

Vasilevskiy should return to the net fresh, and with a new lease on life, once again ready to take on the hockey world. Expect him to be named as a 2022-23 Vezina finalist.

The 2021-22 Vezina winner enters the 2022-23 campaign as the lead horse, the frontrunner to defend his crown as the world’s best netminder. Shesterkin is looking to become the first back-to-back Vezina winner since Martin Brodeur in 2007 and 2008.

Shesterkin was a shoo-in for the 2021-22 Vezina and it will take a historic season from another netminder to knock the Russian from his lofty pedestal.

Are you ready to place a bet online? BetMGM is the premier destination for NHL betting.

At the online sportsbook, you can bet during the offseason with futures like Stanley Cup odds, during the season with puck lines and player props, or during games with live sports betting. Whether you’re new to hockey, a longtime NHL fan betting for the first time, or a casual fan that bets every night, there’s a variety of updated odds for everyone.