Can the Philadelphia Eagles Rushing Attack Lead Them to a Super Bowl? 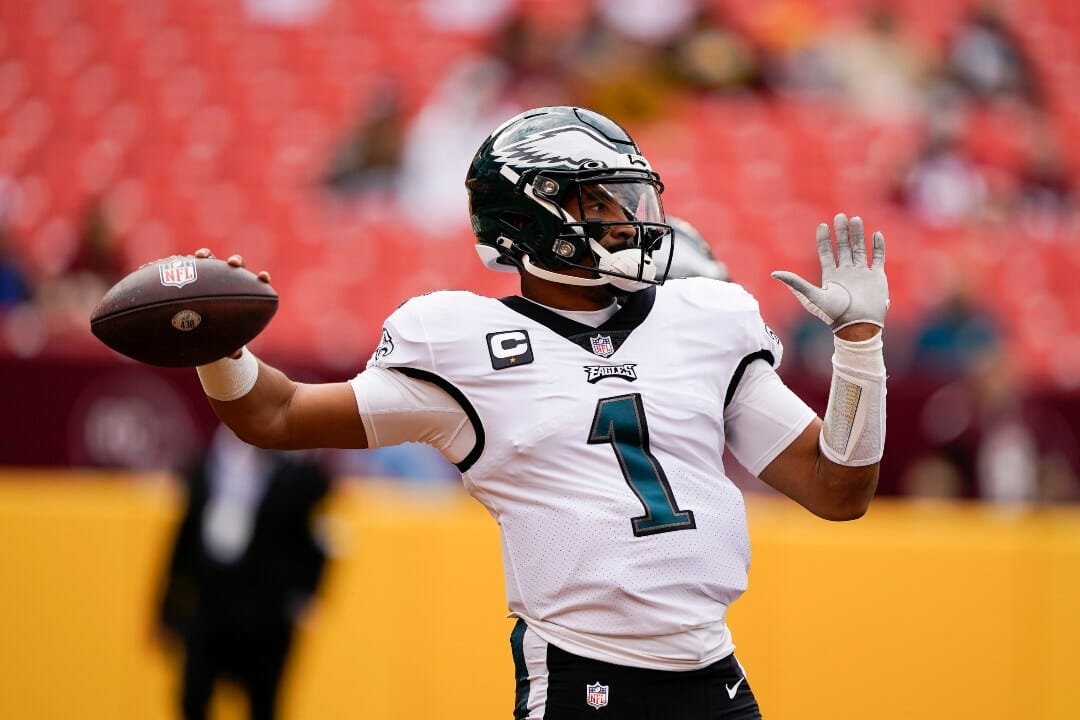 The Philadelphia Eagles bounced finished in last place in their division in 2020. Now, they’ve earned a playoff berth in 2021. Their league-leading rushing attack is a significant factor in the success they found this season.

As the seventh seed, they will have the most challenging path to Super Bowl LVI in the NFC, as they’re guaranteed to play every game on the road. Current Super Bowl odds have the Eagles as a +6600 longshot.

Can the Eagles defy the odds this season?

Before looking too far ahead, here’s the information for their first playoff game:

The Eagles travel to Tampa for a Sunday matinee against the Tampa Bay Buccaneers, defending Super Bowl Champions.

A Case For the Philadelphia Eagles

Philadelphia received some positive news. Injured RB Miles Sanders has a good chance to suit up this Sunday. He missed the season’s final two games with a broken hand, but Philly head coach Nick Sirianni said he’s hopeful Sanders can play this week.

That’s excellent news because Sanders terrorized opponents before his injury. In the last five games he played, including the one he got injured in, he averaged 6.13 yards per rush on 74 carries.

If the running game is working, they can control the clock and keep their defense fresh. Limiting the opponent’s possessions will help them, considering the first two quarterbacks they would face are Tom Brady and Aaron Rodgers.

Looking ahead, Rodgers’ Green Bay Packers allowed 4.3 yards per rush this season, which Philly should be able to take advantage of if they get the opportunity.

A Case Against the Eagles

The Eagles lost every game against teams that made the playoffs this year. Their only win against a team that finished with a winning record was against the New Orleans Saints, and they lost to Tampa in Week 6.

Philadelphia fell behind 21-7 in the first half and couldn’t complete the comeback, eventually losing 28-22.

The Bucs start hot, scoring an average of 15.4 points in the first half, which translates to defensive success against the run. Because teams often play from behind, the Bucs faced the fewest rushing attempts per game this season (21.5).

The Eagles won only two games this season when they ended the first half behind on the scoreboard. These situations force Philly to abandon their running attack, and Jalen Hurts’ low completion percentage (61.3%) doesn’t translate to success through the air.

I believe Philadelphia will struggle against the dynamic NFC passing offenses.

Jalen Hurts and the Philadelphia Eagles made the playoffs despite a 4-6 record after ten games. Part of the reason they could fly through the final weeks was the number one running attack in the league.

Ultimately, I believe their inability to mount second-half comebacks because of a subpar passing game limits their chances for Super Bowl success.

Do you think that Philly’s rushing attack can lead them to another Super Bowl? Why not place a wager with the best in Pennsylvania sports betting? Create a BetMGM account today and receive a risk-free initial bet worth up to $1,000.