Will Tyreek Hill Have Over 100 Yards Receiving Against the Bengals? 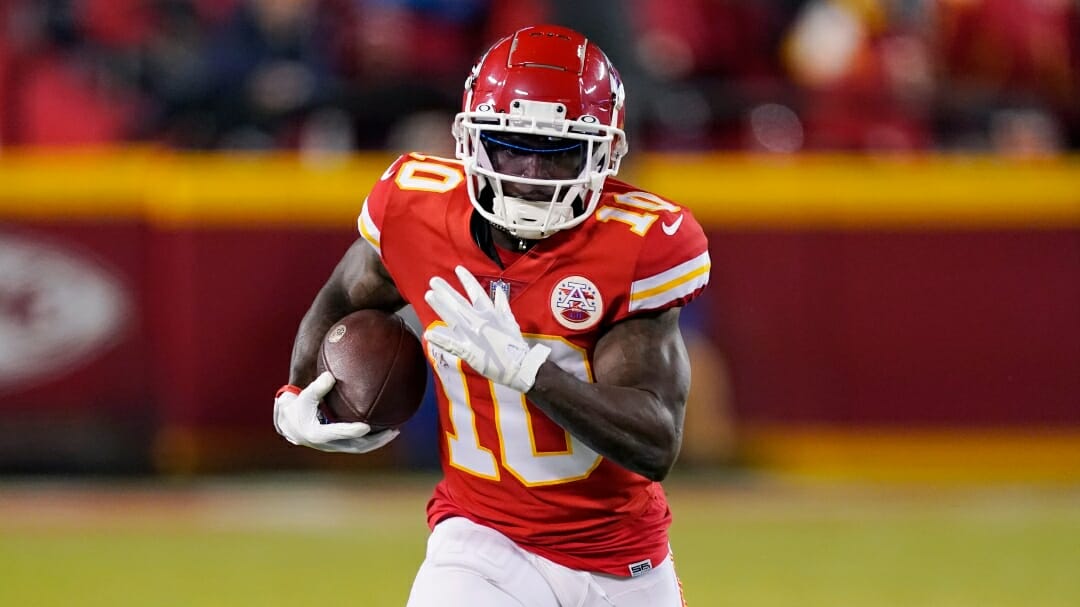 In the AFC Divisional Round, Kansas City Chiefs wide receiver Tyreek Hill changed the course of the game. His explosive touchdown in the final minute of the fourth quarter gave Kansas City the lead. Hill’s explosive punt return led to another quick score earlier in the game.

NFL playoff odds have the Chiefs as 7.5-point favorites against the Cincinnati Bengals in the AFC Championship game. If Hill has another big day, the Chiefs could make their third consecutive Super Bowl appearance.

Here is everything that you need to know about the AFC title game:

Hill is one of the most dangerous wide receivers in the league. Hill had an incredible season this year, recording 111 catches for 1239 receiving yards.

Hill broke the 100-yard barrier just three times this season. In Weeks 1 and 4, he had 197 and 186 yards, respectively. The Chiefs’ star receiver did not exceed 100 receiving yards again until Week 15 in an overtime win versus the Los Angeles Chargers.

Last week in the AFC divisional round, Hill had 11 catches for 150 receiving yards. However, the Pittsburgh Steelers held him to 57 yards through the air the prior week.

Several factors affect whether Hill can put up a big day. The most significant factor is the Bengals’ defense.

The Bengals’ defense was not strong against the pass this year. The Bengals are 26th in the league in passing yards allowed per game (248.3).

However, the Bengals have a recent history of containing Hill. In a Week 17 shootout against Cincinnati, Hill recorded just six catches for 40 yards. This means he averaged only five yards per reception against the Bengals’ defense.

After witnessing last week’s games, it would not surprise me if the Chiefs and Bengals produced another shootout. The Bengals also have a high-powered offense capable of putting up a lot of points.

If the game turns into a shootout, it will favor Hill having a big game, but because of the Bengals limiting Hill in Week 17, I don’t believe he’ll have a 100-yard day.

Will Tyreek Hill Have a Big Game in the AFC Championship Game?

Hill is certainly capable of having a big game. He has game-changing speed and can turn a quick route into a long touchdown reception.

In my opinion, the 2022 statistics do not strongly support the likelihood of a 100-yard game. Hill averages less than 75 yards per game, and the Bengals already held him to under 50 yards once this season.

To place your wagers on the AFC Championship game, check out BetMGM’s online sportsbook. Sign up for an account today for a risk-free initial bet of up to $1,000.