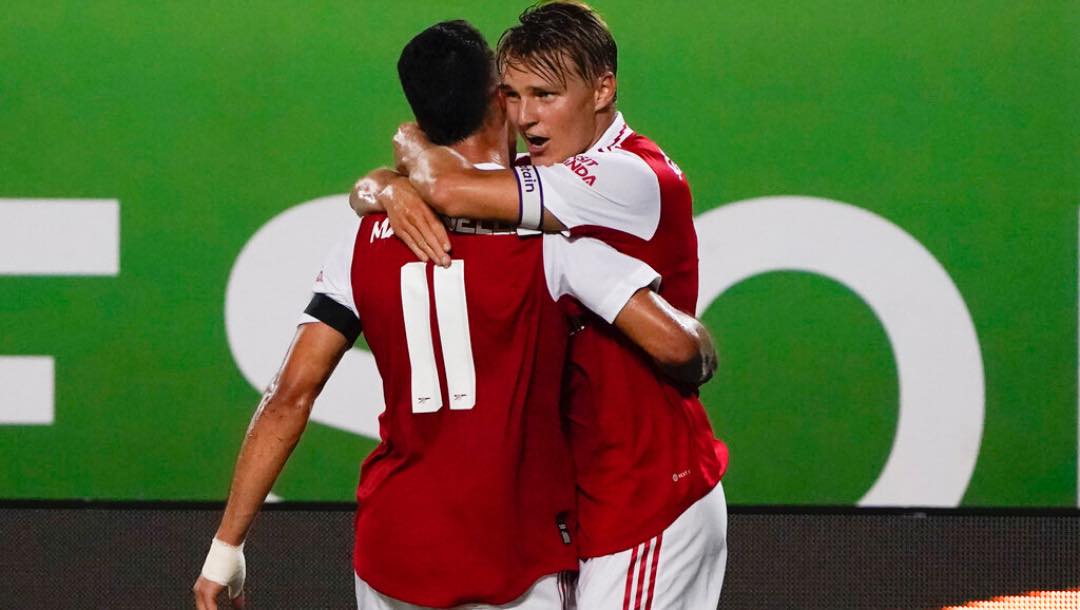 Arsenal has started the season strongly and maintained their 100% record with a 3-0 win over Bournemouth at the Vitality Stadium. Martin Ødegaard put two past the Cherries’ keeper within 11 minutes, which meant that the Gunners had plenty of time to enjoy the game.

They sit at the top of the table with Manchester City dropping points over the weekend, and the Premier League betting odds have Arsenal down as clear favorites against newly-promoted Fulham. Although the Cottagers will be a sterner test than Bournemouth.

Fulham has also impressed in the first three games of the season, picking up five points in three matches upon their return to the Premier League. The 2-2 draw against Liverpool on the opening weekend was impressive, and the Cherries earned their first win in Matchweek 3 against an in-form Brentford.

Can Fulham build on their impressive start and trouble Arsenal at the Emirates? Let’s take a look at the odds and the key areas that will dictate this match.

The Gunners are heavy favorites for a reason, and there’s been some serious line movement in the EPL title odds from +4000 to +1000 in the first three weeks of the season.

Arsenal has won all three fixtures so far, and the manner of those wins back up the increasing belief that this will be a positive season for the club.

Fulham may have had a bright start to the season, but there’s still a gulf in class between the two teams. The Cottagers’ track record against Arsenal makes for poor reading, too, with just one win in their last 12 meetings.

Arsenal’s Defense Have to Shut Down Aleksandar Mitrović

This match is going to be won or lost on how Arsenal’s defenders handle Aleksandar Mitrović. The Serbian striker is 6-foot-2, and he’s scored two headers already this season. The Gunners’ backline will have to win the aerial battle against him if they want to take all three points.

Mitrović scored 43 goals last season, an EFL Championship record, and he is renowned for targeting the least imposing players in the heart of the defense. This means that Oleksandr Zinchenko is in for a long afternoon.

The Serbian will be the biggest threat to the Gunners, and their defense will work hard to keep him quiet.

Fulham manager Marco Silva has started Antonee Robinson and Tim Ream at left back and left-sided center back, respectively, in all their games so far. The two American national team players were decent in the Championship but will have to prove that they can handle the pressure of the Premier League.

Unfortunately for the duo, they have the unenviable task of managing Gabriel Jesus and Bukayo Saka.

Ream will have a long afternoon against an in-form Jesus, and Robinson will have to be super switched on to deal with Saka’s tricky dribbling skills.

Even if the two strikers are marked out of the game, the Gunners have a plethora of attacking talent in Martin Ødegaard and Gabriel Martinelli to run into the spaces they leave.

Blunting Arsenal’s attacking prowess is the only way Fulham can hope to get something out of this game.

I don’t see this Arsenal side dropping points at the moment, especially in front of a home crowd. This game is an opportunity for Mikel Arteta’s team to show that they have a stronger mentality this season.

They are playing with a sense of confidence, formation fluidity, and quick combinations that haven’t been seen in an Arsenal side for some years. They can execute the high press and win balls back in promising areas.

Most importantly, Arsenal has nine goals this season, and their attacking talent isn’t limited to their strikers.

The Gunners will force Fulham to chase the game for long stretches and score goals whenever they get the opportunity.

Arsenal undoubtedly has the quality to break down the Cottagers’ defense and will see out another three points at the Emirates.