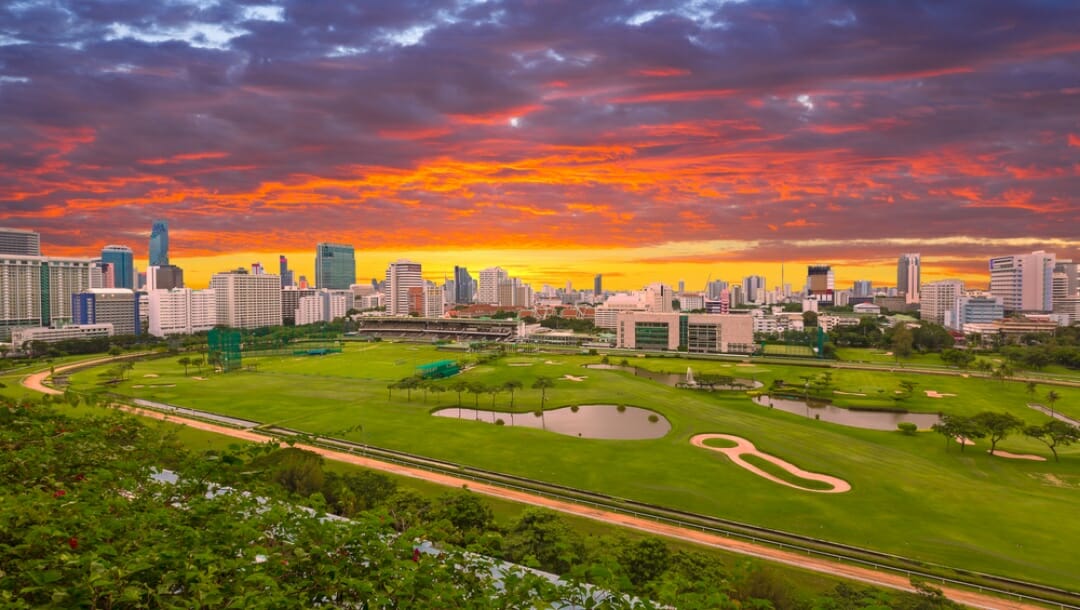 Horse racing and golf don’t immediately jump out as an obvious pairing. Especially not when it comes to real estate.

Consider that as recently as 2020, a man playing golf on a course within the Ellerslie racetrack in Auckland, New Zealand, wandered on the track to play his shot and was met with a thunder of racehorses barrelling towards him in the middle of a race.

Yet, golf courses and horse racing seem to have a fairly long history. Bettors and golfers have enjoyed this strange mix for over a century, starting the love affair along the coasts of Scotland and England.

Here are a few reasons why horses and golf go together so well, along with five of the top race tracks that have golf courses inside or attached to them.

The thrill of the races 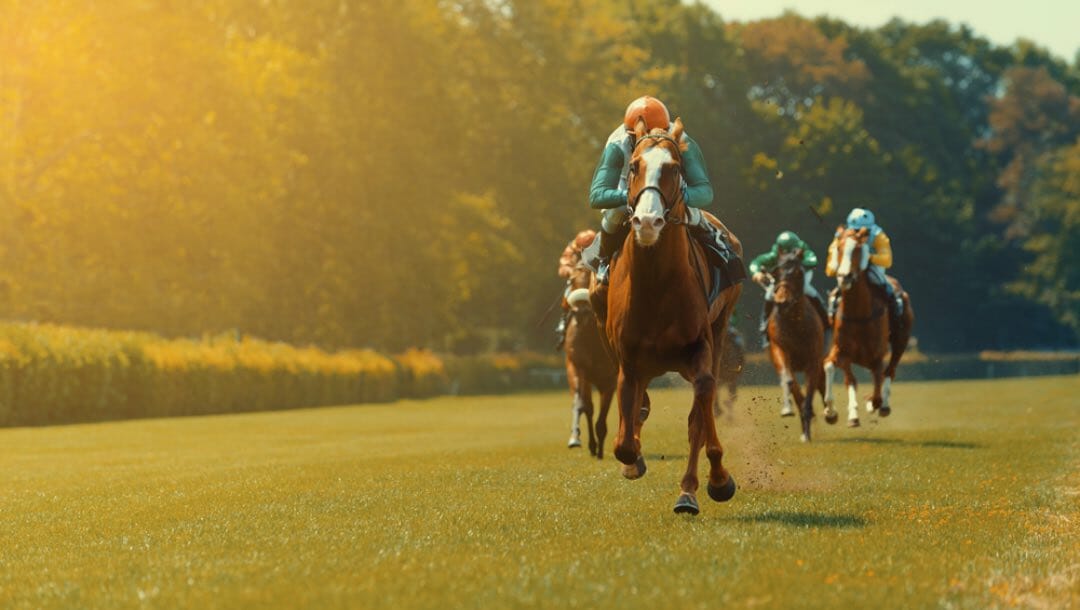 Horse racing betting is intoxicating. Taking a chance on your favorite for the day or taking a risk on a long shot while sipping on a flute of champagne in your Sunday best has long been the subject of novels and film alike.

Days at some of the largest tracks for thoroughbreds have always been portrayed as something special to experience. The fanfare as owners, horses, trainers and riders parade before a race while punters shout out the odds and bettors trade superstitious tips all add to the thrill.

Betting, however, is the main ingredient. It is the underlying tension of risking everything publicly but also the anticipation of ecstasy should your gamble pay off that underlines the pomp and ceremony.

Events like the Kentucky Derby in Louisville, USA ($3 million), The Gold Cup at Ascot in England ($495,000) and even the Dubai World Cup at the Meydan Racecourse ($12 million) in the UAE all contribute to the glitz and glamor associated with racetrack culture.

It’s no wonder then that the sport of golf dovetails so beautifully with horse racing.

When and why did golf courses pair with horse courses?

While golf can be traced back centuries, combining them with racetracks dates back to the late 19th century. There has been much speculation about why this happened, with a few hypotheses popping up over the years.

Some have suggested that early clubs built golf courses in the middle or near racetracks to take advantage of the facilities that tracks already had, like grandstands and bars. Others simply argue that a nine-hole fits nicely inside a track.

The winning idea must be that playing a round of golf surrounded by the buzz of a day at the races is a unique and rewarding experience that can only improve the swagger in your step and the swing of your club.

Here are five racetracks from around the world with golf courses within or near them.

Situated just outside the picturesque and ancient city of Edinburgh, close to the River Esk, is Musselburgh Links. It’s considered the world’s oldest golf course, said to have hosted Mary Queen of Scots in 1567 when she apparently played the nine-hole links course.

Musselburgh Racecourse hosts races all year round but is particularly renowned for six particular days of racing that include New Year’s Day, The Scottish Trials Weekend, Easter Saturday, Ladies Day, the Summer Finale Weekend and the flagship event, The Edinburgh Cup. 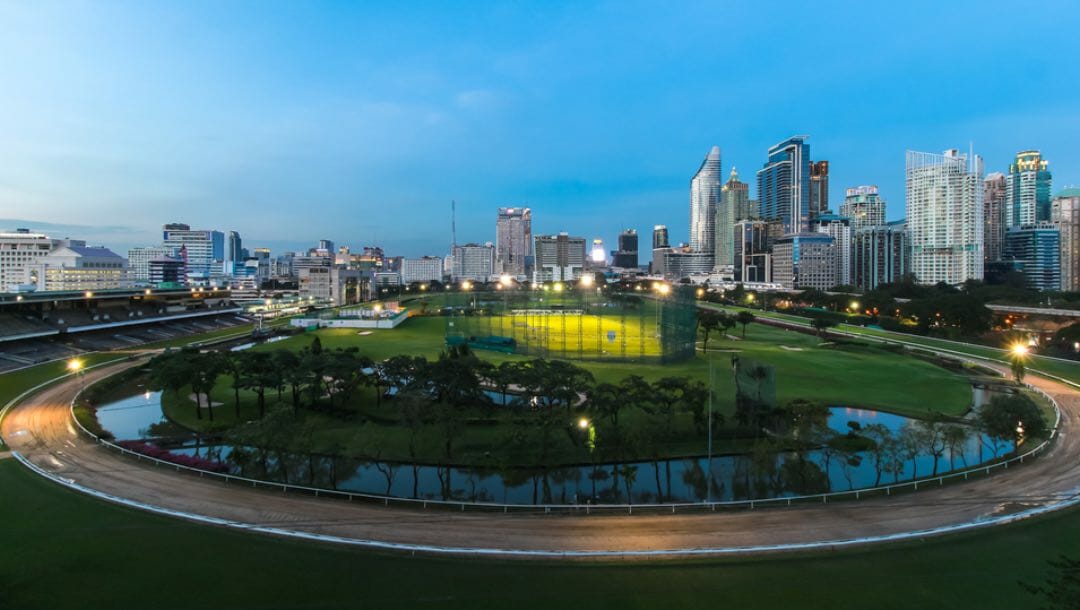 Newcastle Racecourse is a two-mile, 56-yard-long course famed both for its Northumberland Plate Festival when patrons arrive dressed to impress and compete for the $175k purse, and the Northumberland Golf Club that runs within and outside the racetrack.

The 18-hole golf course sports 12 holes within the rails while six holes run outside the racecourse. It has played host to both national and regional championships.

Home of the famous Durban July event, Greyville is one of South Africa’s oldest racetracks and also houses the Royal Durban Golf Club. The Durban July is South Africa’s most prestigious annual thoroughbred race with a purse of $291,000 and attracts the country’s most esteemed guests.

The Royal Durban Golf Club is a links course established in 1892 inside the racecourse and has been host to the 1985 South African Open as well as the 1975 Commonwealth Golf Tournament.

Situated about 90 miles outside of Melbourne, the Alexandra Racing Club is a rustic racetrack with a far less illustrious pedigree than some of the other racetracks and golf courses on this list.

Coupled to the racetrack is the Alexandra Golf Club, an 18-hole course that requires golfers to cross the track at least 14 times during a round.

Known for its picnic racing season and flagship race, The Alexandra Cup, The Alexandra Racing Club hosts 33 races where families make up the majority of the spectator base and look forward to the rural hospitality.

Home to the Irish Gold Cup, a steeplechase event for five-year-old horses and older, Leopardstown is one of the oldest racecourses in Ireland. Races are run year-round and include The Christmas Festival, Dublin Racing Festival, Bulmers Live at Leopardstown and the Longines Irish Champions Weekend.

Smack bang in the middle of the racecourse is the Leopardstown Golf Center. It is an 18-hole course that was built in the 1960s and is famed for its practice and tuition center.

Racetracks with golf courses you can visit

As you scan the horse racing news media for tips on how to improve your horse racing strategy and improve your online sports betting portfolio, you probably would not have expected to see this odd combination.

Register with BetMGM to get all your live horse racing odds and horse racing picks and place your NYRA bets and entries online.