Los Angeles Rams’ Wager on Themselves Paying Off 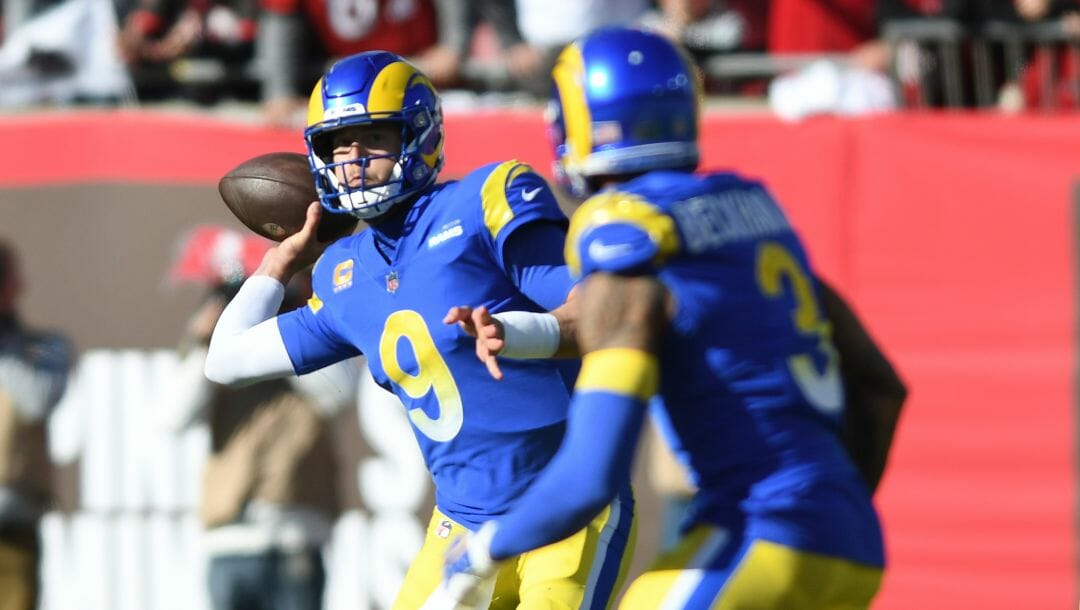 Planted in the middle of the pocket, Matthew Stafford was afforded plenty of time. Eventually, the Los Angeles quarterback found his target.

The Rams were on the verge of losing in the NFC Championship. They were deep in their own territory, had less than 10 minutes remaining and faced a three-point deficit.

Odell Beckham Jr. corralled the ensuing pass from Stafford. As he went down, he was thumped late by San Francisco defensive back Jimmie Ward. The penalty and 29-yard reception set the Rams up across midfield and, eventually, led to triumph.

Moments like these, a pivotal connection between their talented quarterback and receiver who were both acquired since the end of last season, are precisely why the Rams made the drastic moves they did.

They traded away two first-round picks to bring in Stafford. They’ll go at least seven years without a first-round pick in the NFL Draft. But that was the aggressiveness that led them to the point they’ve reached.

The Rams will play in their second Super Bowl in four years when they take on the Cincinnati Bengals. Stars like Beckham, Von Miller and Jalen Ramsey were brought in with this in mind.

“It took everything we had,” Rams head coach Sean McVay said of snapping a six-game losing streak against the NFC West rival 49ers on Sunday. “But I’m so proud of our group. So proud of our players, our coaches. Just proud to be associated with these guys. So many special men in that locker room.”

The philosophies for NFL team building are varied. Some greatly value their first-round picks, meaning trading them away wouldn’t align with their principles.

The Rams, however, believed they had the infrastructure in place to win immediately. This compelled them to give away draft capital to bring in talent for an immediate playoff push.

While some teams may have hesitated trading for Miller, the former Denver Bronco superstar pass rusher who’s now 32, the Rams shipped off a second-rounder and third-rounder for him on Nov. 1. He’s Pro Football Focus’ fourth-ranked edge rusher this season with 11 sacks and 56 hurries this season.

Welcome back to the @SuperBowl, @VonMiller. pic.twitter.com/KWJ1pN1xQW

While others may have shied away from the steep asking price for Ramsey when he was playing for the Jacksonville Jaguars, the Rams jettisoned two first-rounders for the cornerback. He’s an All-Pro and has PFF’s top grade at his position among those who have played 20% of the most snaps in the league.

While pro teams could have fretted about adding Beckham following a tumultuous tenure with the Cleveland Browns, the Rams remained aggressive in their quest for talent. Miller said he called the skillful wide receiver every day in the hopes of playing together.

Beckham caught nine passes for 113 yards in the conference title game. It was a culmination of the impact he’s provided since he arrived.

“The culture here is amazing. We didn’t have anything to do with that,” Miller said during a postgame press conference Sunday with Beckham. “… It’s an honor and a privilege to be a part of it and to join it midseason and for them to accept us with open arms and for it to be a smooth transition.

Stafford consistently showcased the skill to be regarded among the top quarterbacks in the NFL since he was drafted in 2009. But he played for the Detroit Lions, who just as often suffered losing seasons despite his standout performances.

So the Rams sent their 2022 and 2023 first-round picks, a third-rounder and quarterback Jared Goff to the Lions to upgrade at the position. Goff was the passer that kicked off the Rams’ drought of first rounders, as they sent away a pick to draft him first overall in 2016.

But the Stafford move has been worthwhile. He’s sixth by Football Outsiders’ DYAR metric, which measures the value of a quarterback. Goff was 20th this season.

“We went out and got him because we thought it was a chance to be able to get a great player of his magnitude,” McVay said. “Those things don’t come around often. What he’s done, he’s elevated everybody around him. He’s made me a better coach. He’s made his teammates better.

Stafford’s been exceptional in pressure situations, even though he earned his first postseason win this year. He passed for 337 yards with two touchdowns and one interception while completing 31 of 45 throws against the 49ers. He was 15 of 21 with 207 yards in the second half.

With his postseason production, Stafford is a win away from a championship he’s sought after. McVay noted, “no moment’s too big for him.”

“Long time coming,” Stafford said. “Spent a lot of years in this league and loved every minute of it. I feel blessed to be able to play in this league for as long as I have. But I sure am happy for this opportunity for not only myself but really so many guys in that locker room that deserve this too.”

Beckham credited Stafford and McVay for integrating him into the team’s scheme and chemistry instantly. They instilled confidence in him that he could contribute in short order.

That same dynamic never quite materialized with the Browns. But in his first game for LA on the opening offensive play, a game at San Francisco in Week 10, Beckham caught a 5-yard pass from Stafford.

This proved to be only an indication of the impending success the former Pro Bowler would enjoy. McVay lauded Beckham for making critical receptions in the NFC Championship. He specifically pointed to his catch before the hit by Ward.

McVay said Beckham is “such a special player, so smart, so talented, so gifted.” But he also added how important his charismatic presence has been for the Rams as well. The coach was content in not only knowing Beckham was a part of the Rams’ postseason run but that he was a major factor in it.

“It’s just been an incredible opportunity that I feel like we’re just trying to make the most of, and here we are playing in the Super Bowl,” Beckham said. “One game away from our dreams. We’ve just got to keep going.”

OBJ to the SUPER BOWL 🚀

Beckham felt Los Angeles was the right place for him following those talks with Miller. They discussed the potential of a championship, but Beckham confessed he was unsure how real that potential was.

LA is less than two weeks from hosting the sport’s greatest spectacle. Miller called it “surreal.”

But the Rams have long envisioned this. With a win over their divisional rival to reach this pinnacle, the Rams’ risks are bearing success.

“I’m at a loss for words,” Beckham said. “I’m just trying to enjoy the moment, but still thinking about the bigger picture.”