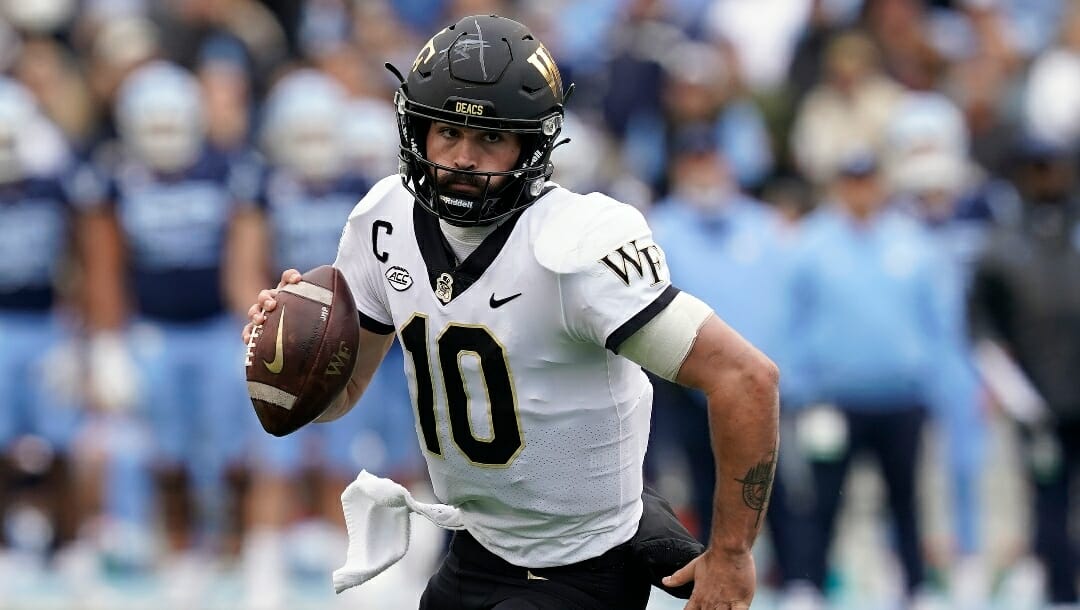 The quarterback play in the ACC last year could not have been better. But it will be a much different story for the 2022 college football season.

The departure of Heisman Trophy candidate Kenny Pickett and the loss of Sam Howell leaves the top of the ACC signal-caller ranks much thinner.

However, many high-profile players decided to return to campus for another year.

There is a lot of upside and intrigue with ACC quarterbacks heading into 2022. However, no one is sure which one will become the next breakout star.

If it seems like Hartman has been around a while, it’s because he has.

He’s played 36 games over four years, thrown almost 1,200 passes for 9,266 yards, and has accounted for 88 total touchdowns — 50 of which came last fall. He led the second 11-win season in school history and Wake Forest’s No. 15 final AP ranking was the best in school history.

Leary is one of the most underrated quarterbacks in America.

He’s played in 24 career games and has 51 passing touchdowns to go along with 12 interceptions. Additionally, every efficiency metric in 2021 was a personal best. He is quietly one of the best all-around quarterbacks in the game.

The rising senior was one of only two players in the nation to average over 400 yards passing per game last fall.

His defense let him down, though, as he led a top-25 scoring offense but only won six games. No one attempted more passes per game (45) in the ACC than the Virginia quarterback.

Van Dyke is hard to pinpoint on this list because he simply hasn’t played a full season yet.

He didn’t get fully entrenched as the starter last fall until the second month of the season, but he was able to stabilize the position. Miami won five of their last six games, while Van Dyke threw for over 300 yards in all six games with 20 touchdowns and just three interceptions.

Jurkovec doesn’t always put up the best numbers, but he’s a proven winner.

The Boston College quarterback is 14-7 in games he attempts a pass over the course of his career. He is a perfect cultural fit for what Jeff Hafley and the Eagles want to be.

Evaluating the Clemson quarterback is going to be controversial no matter what.

He’s one of the most talented individual players in the league and was dealt a tough hand playing behind an atrocious offensive line and completely reworked set of skill players in 2021. Now, his offensive coordinator is gone as well.

The Tigers’ offense should be much improved in 2022 but by how much? More interceptions than touchdowns aren’t acceptable.

Which Slovis are Pitt fans getting? When he was good running the air raid spread at USC, he flashed brilliance.

As a freshman in 2019, he finished with 3,502 passing yards and 30 touchdowns. In the two years since he’s battled injuries and his production has leveled off. Now, he transfers to the East Coast and will try to fit into new coordinator Frank Cignetti’s offense.

Cunningham is an elite athlete — 1,031 yards rushing and 20 touchdowns last year alone — but needs to take another step as an all-around player for Louisville to become a factor in the ACC again (and for Scott Satterfield to remove himself from the college football hot seat). He has over 10,000 yards of total offense and 100 total career touchdowns.

Travis is trying to stabilize a very unstable situation in Tallahassee.

The Noles went 5-2 down the stretch in games he started, and while his numbers don’t jump off the page, he does have poise which should help get the offense back on track.

Playing in Dino Babers’ offense was a badge of honor just a few years ago, but the Syracuse offense has come to a screeching halt of late.

Shrader will be attempting to change that. The former Mississippi State QB brings lots of excitement to the ground game, rushing for 781 yards and 14 touchdowns in his first season as a starter there.

Replacing Howell will be very difficult in Chapel Hill.

The former four-star, top-100 prospect has an amazing skill set at 6-foot-5 and 215 pounds but simply does not have enough experience to be anything more than a big question mark in the ACC.

Brown is a transfer from South Carolina, while Wells arrives from Marshall.

Both are expected to compete for the starting job for new head coach Brent Pry. Wells might have the inside track based on his experience and production at Marshall the last two years (5,626 yards and 34 touchdowns).

The hope was for Sims to get the Georgia Tech offense back on track, but that hasn’t happened.

He’s shown flashes in two years under center and is still young as a rising sophomore. However, his overall efficiency will need to improve dramatically for the Yellow Jackets to take the next step.

The 6-foot-4, second-year player played sparingly in 2021, attempting a total of 62 passes. He will be given a clean slate with new head coach Mike Elko coming aboard for 2022.