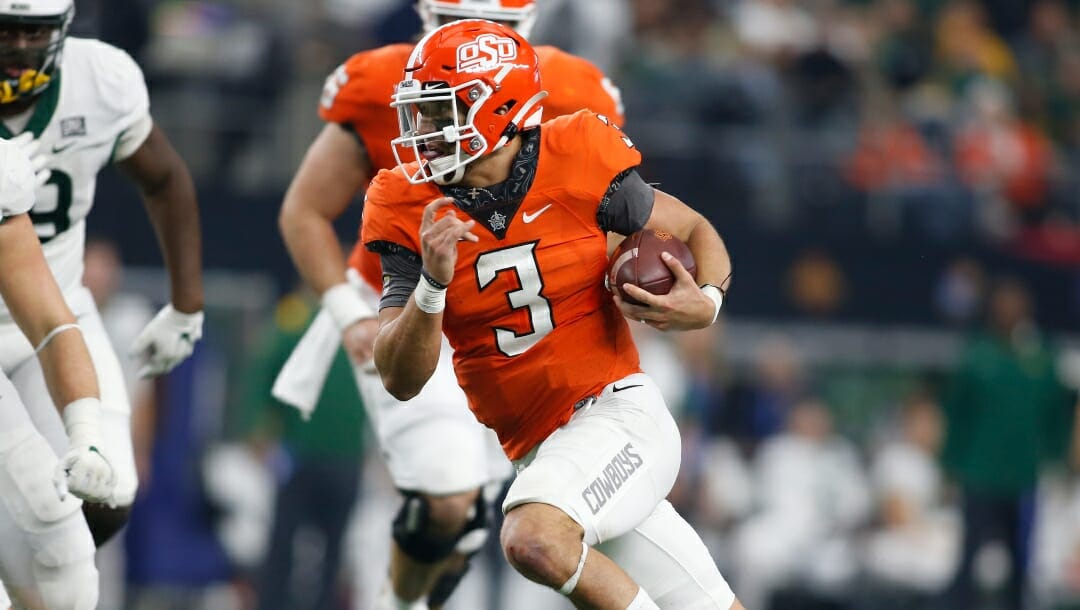 When it comes to potential starting quarterbacks in the Big 12 for 2022, a lot remains unknown.

There is a lot of talent and upside, but this is a conference in flux, particularly compared to other conferences across college football.

Longtime starters like Brock Purdy at Iowa State and Skylar Thompson at Kansas State are gone. Meanwhile, Oklahoma, TCU, and Texas Tech changed coaches. And not to mention Caleb Williams left for USC after playing just half a season for the Sooners.

This group is a fascinating blend of veterans who need to take the next step, and some new faces with a lot to prove.

The former UCF Knight brings a combination of production, experience, and talent to the best team in the league – and the only Big 12 team better than +5000 in national championship odds.

In two full years as a starter in Orlando, Gabriel posted over 7,000 yards passing, 67 total touchdowns, and just 11 interceptions. He should be a great fit in new offensive coordinator Jeff Lebby’s system.

Ewers is easily the most physically gifted player in the conference and will be running one of the best offensive schemes in America. Let’s see what the NIL darling can do in his first real college season after riding the pine for Ohio State last year.

If Sanders stays healthy and doesn’t turn the ball over, he could be considered the best QB in the Big 12.

He was inches away from winning a Big 12 title last season and has played in 33 games for Mike Gundy. Yet, his efficiency metrics haven’t improved over time, highlighted by his 31 career interceptions. Sanders makes big plays with his arm and legs, but there is definitely another level to be reached in his fourth season.

In theory, Duggan is the most efficient returning Big 12 starter averaging 7.23 yards per play, and his 240 yards of offense per game is second only to Sanders.

He’s grown from an efficiency standpoint every year as well, improving his completion percentage, QB rating, and touchdown-to-interception ratio over his three years at the school.

If he stays healthy and keeps his starting gig, he could finally reach his very large potential.

Martinez comes from Nebraska after never really putting it all together for Scott Frost and the Huskers.

He comes to Manhattan with 39 games played, over 8,000 yards passing, over 2,000 yards rushing, and 80 career touchdowns. Now paired with star running back Deuce Vaughn, the two could create major problems for Big 12 defenses in 2022.

Coordinator of the Year candidate Jeff Grimes has a good problem in 2022: deciding between two really solid players.

The starting job could go to the player who performs best in the spring practices.

Smith didn’t get into the starting lineup until late last year, but outside of one giant clunker against Oklahoma State, he was very effective as a freshman.

Smith averaged 8.5 yards per pass attempt and led the Red Raiders to upset wins over Iowa State, Mississippi State, and almost beat No. 5 Baylor on the road.

With new coordinator Zach Kittley running the show, Smith could explode in 2022 (provided he can win the job).

As a sophomore, Daniels started just a few games to end the season and offered a glimpse into the future for head coach Lance Leipold.

He threw six touchdown passes in the final three games of the year, including three in the massive road upset of Texas. Maybe the Jayhawks have found their QB of the future.

Dekkers has two years under his belt learning behind Brock Purdy. The four-star, dual-threat recruit is now physically developed and will look to take advantage of his opportunity.

The Mountaineers could be rolling with a true freshman under center as this four-star recruit comes to Morgantown from Arizona.

The 6-foot-2, 215-pounder brings a lot of talent, but the lack of experience could be concerning.