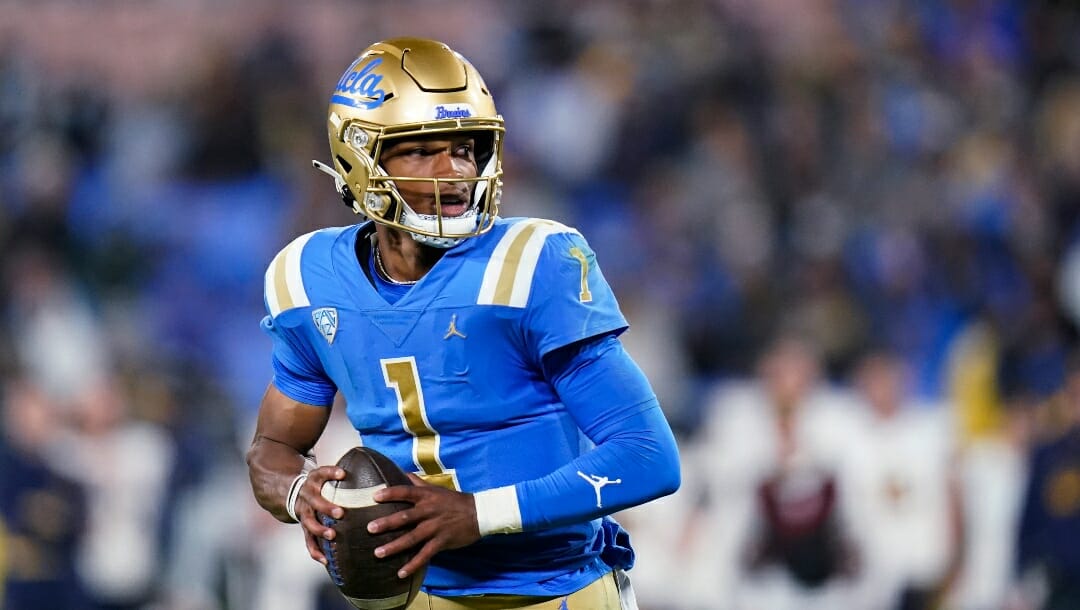 The Pac-12 is a conference in total flux. But, with savvy decision-making and excellent coaching hires, this league could acquire more talent and regain its national presence in college football.

The hope is with new head coaches at key power schools – Lincoln Riley at USC, Dan Lanning at Oregon, and Kalen DeBoer at Washington – it has done just that.

These coaches have to keep the best West Coast players from going to other parts of the country and play in conferences like the SEC, Big Ten, and more. That, however, takes time.

Meanwhile, the fastest way for this conference to regain its footing is to improve the quarterback position through the transfer portal.

No conference in America has done a better job of using the portal this offseason than the Pac-12. Almost two-thirds of teams could feature a transfer signal caller in 2022, and the hope is this influx of talent will help stabilize the conference in the short term.

The most talented quarterback in America not named Bryce Young is Caleb Williams. Williams took over as Oklahoma’s starting QB against Texas on Oct. 9 of last year and he kick-started a struggling offense instantly.

His 8.1 yards-per-play average was fifth nationally last year, and he followed his coach to Southern California. With Williams and Riley, the Trojans are an instant Pac-12 title contender and, currently, tied with Michigan, Oklahoma, and Texas A&M for the fifth-best national championship odds at the online sportsbook.

Much like Oklahoma and Williams, the Utes struggled out of the gate last year before switching to Rising. After becoming the starter, Rising led Utah to nine wins in 10 games, including a Pac-12 championship and the program’s first trip to the Rose Bowl.

Overall, he rushed for 499 yards, averaged 7.8 yards per pass attempt, and only threw five interceptions. Rising will play behind one of the best offensive lines in the league this fall.

“DTR” led the Pac-12 in passer rating (153.9) and yards per attempt (8.5) in 2021 as he continues to improve each year. Thompson-Robinson also added nine rushing touchdowns and over 600 yards on the ground last fall. He’s played in 37 games over four years as a starter and is returning for his farewell romp through the Pac-12.

Nix will have to beat out prized youngster Ty Thompson for the starting job, but it feels like he’s got the inside track to start for one of the best-constructed programs in the Pac-12.

Oregon’s offensive line is outstanding and the weapons on offense are excellent. In fact, the only thing that held this team back a year ago was the play at the QB position. Nix will help the transition from Mario Cristobal to Lanning in Eugene.

The Incarnate Word transfer is a big-time talent with big-time intrigue. He played in the spring of 2021 due to the pandemic, winning the Jerry Rice Award as the most outstanding freshman in the FCS. Then he threw for almost 5,000 yards and 47 touchdowns last fall.

Cameron Ward came to Pullman to reunite with Eric Ward, who was his head coach at Incarnate Word and is now Washington State’s offensive coordinator.

McKee is the leading returning passer in the Pac-12 from a year ago (232.7 yards per game) and could be even better in 2022. For all of his flaws, David Shaw has consistently developed high-level quarterbacks at Stanford and the 6-foot-6, 225-pounder is next in line if he can build on his first full season as a starter.

The Wildcats didn’t even leave the conference to find a transfer starter as de Laura comes to Tucson from Washington State. The rising junior has plenty of ability and experience, so he should help a program that went 1-11 last year.

The Indiana transfer is reunited with former Indiana offensive coordinator Kalen DeBoer, as he is now the head coach of Washington. The issue for Penix has been health.

When Penix was on the field, Indiana’s offense was among the most productive in the Big Ten. The Hoosiers won as many games in the last two years (14) as Penix has missed the last three years (15).

Nolan might be a bit underrated after a sneaky efficient season in 2021. The rising junior was second in the league in QB rating (148.3) and second in yards per attempt (8.4) as he led the Beavers to seven regular-season wins.

The Purdue transfer is just one name in a long list of players who could start in Berkeley this fall. In fact, the Golden Bears might still be searching through the portal for another option all summer. Plummer’s younger brother, Will, plays for Arizona, but the two are not related to former Pac-12 star Jake Plummer despite being from The Grand Canyon State.

There were a couple of nice moments for the freshman last fall, such as a three-touchdown performance against a very good Oregon defense in a close loss. Or his efficient play in wins over Oregon State and Arizona. However, the supporting cast is questionable and his head coach, Karl Dorrell, is on the college football hot seat.

Losing Jayden Daniels to the transfer portal was a gut punch for an embroiled program and coaching staff this late in the process. Arizona State could still look to the portal for another option, but for now, the Sun Devils will turn to the Alabama transfer — and Bear Bryant’s grandson — to hold down the fort.