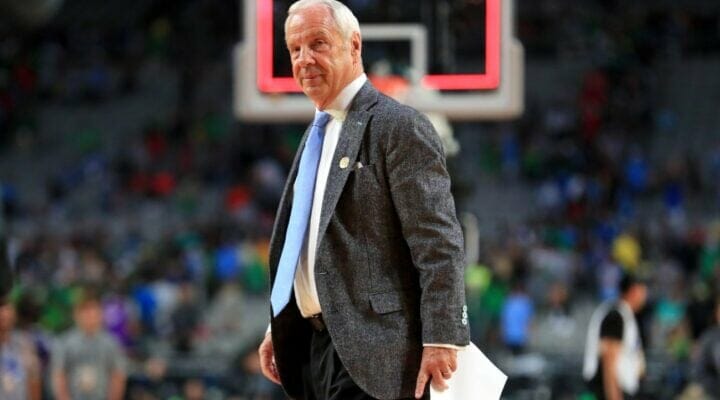 “Thank you for all you have done and meant to everyone who plays and loves our game. After 33 years as a Hall of Fame head coach, our beloved Tar Heel Roy Williams is announcing his retirement,” tweeted the North Carolina men’s basketball account on Thursday morning. While the news was initially greeted with April Fools’ Day skepticism, the retirement is real.

A North Carolina native who played on the Tar Heels’ junior varsity team in the late 1960s, the 70-year-old Williams retires with 903 career Division-I wins, only trailing Jim Boeheim and Mike Krzyzewski for the most in history. He was inducted in the Naismith Memorial Hall of Fame in 2007, won three national championships, and is a two-time AP National Coach of the Year.

With Williams out, whom might North Carolina target for their first coaching search in nearly two decades?

Hubert Davis has long been rumored as a potential successor. Davis, 50, played under Dean Smith at North Carolina from 1988-92 and has been on Williams’ staff since 2012. Alongside Steve Robinson, he’s been Williams’ right-hand man for nearly a decade and led the recruitment for most of the program’s biggest targets, including R.J. Davis and Tony Bradley. He has no head-coaching experience and has never coached outside of Chapel Hill, though that’ll hardly matter, if at all, for athletics director Bubba Cunningham.

Without an army of obvious alumni or former assistants, it’s highly possible North Carolina opens the search to candidates without notable ties to the program or region. Scott Drew and Chris Beard (update: Beard is the new head coach at Texas) should be mentioned (after Indiana speculation went nowhere), as should Brad Underwood and Tony Bennett. All four are in comfortable, high-paying jobs with the potential to annually compete for Final Four runs, but, for what it’s worth, not one of their programs is as highly regarded as North Carolina.

Nate Oats and Eric Musselman have exploded into the national spotlight after mid-major success and quick turnarounds at their respective programs. Surely, stakeholders will be turned off by their lack of ties to the area and limited high-major head-coaching experience. Still, they’re both attainable during an era when more coaches are rejecting historically strong jobs.

Chris Holtmann could be in the mix after rejecting Indiana’s courtship, though the Oral Roberts’ stench is still hovering and his lack of tourney success might be a turn-off. Mike Boynton has done a better job at Oklahoma State than he gets credit for and knows the region well after playing at South Carolina and spending the first decade of his career in South Carolina. Steve Pikiell and Mick Cronin are also worth mentioning.

If North Carolina takes a mid-major shot, Wes Miller is a North Carolina native who played under Williams and has spent his entire career in the state. He has zero high-major experience but, at only 38 years old, already has a decade of head-coaching experience at UNC Greensboro.

At BetMGM, you can view college basketball odds, NBA odds, NFL odds, and odds for dozens of other sports. With live betting, promotions, and teasers, the best online sports betting experience is at BetMGM.