Russell Wilson Is About To Unlock the Broncos’ Potential 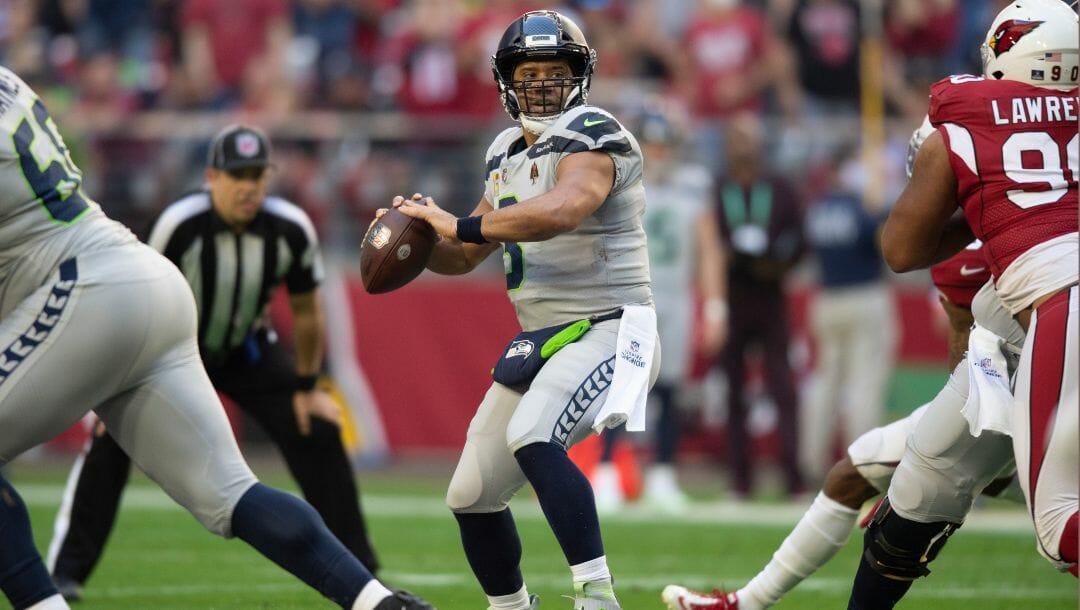 On the same day reports filtered in about Aaron Rodgers remaining in Green Bay, news surfaced about another superstar quarterback changing teams.

According to ESPN, the Denver Broncos are trading standout players and draft capital to the Seattle Seahawks in order to acquire Pro Bowl quarterback Russell Wilson. This greatly changes both teams’ odds to win Super Bowl 57.

Blockbuster: After weeks of negotiations, in one of the largest trades in NFL history, the Seattle Seahawks and Denver Broncos have agreed to terms for a deal involving Super-Bowl winning QB Russell Wilson, sources tell ESPN.

Trade is pending a physical and Wilson’s approval. pic.twitter.com/oRFDV8Ehyx

The Broncos will receive a fourth-rounder back in the trade on top of Wilson.

While the Seahawks have enough to aid in their rebuilding efforts, the Broncos will greatly benefit from plugging Wilson into their offense.

Wilson is tied for the fifth-best NFL betting odds to win MVP at +1400. However, he’s among a top tier that includes two other quarterbacks in his new division, the AFC West.

Patrick Mahomes of the Chiefs and Rodgers are tied at +700. Josh Allen of the Bills is next at +900, the Bengals’ Joe Burrow is fourth at +1200 and the Chargers’ Justin Herbert also has odds of +1400.

The Broncos are tied for the fifth-best Super Bowl odds at +1200 and are third to win the AFC at +650. They opened at +1600 with the possibility of trading for a high-caliber signal-caller but shifted to +2500 after Rodgers’ four-year, $200 million contract was publicized Tuesday. Denver’s odds dramatically shifted right back, following the Wilson trade.

The Chiefs have the top NFL betting odds to win the AFC West at -115 while the Broncos are second at +275. The Bills and Chiefs are tied to win the AFC at +400.

Wilson, at 33 years old, undoubtedly took a step back last season. He was rated 15th by Football Outsiders’ DYAR metric after ranking 11th in 2020 and fourth in 2019.

But last year’s regression occurred while Wilson was dealing with a finger injury he suffered early in the season that ultimately required surgery. Wilson should have plenty of time to heal this offseason and enter the 2022 season with a clean bill of health.

Wilson helped the Seahawks win their only Super Bowl, a win over the Broncos in 2014. He has garnered nine Pro Bowl selections and earned more wins through his first 10 seasons than any other QB ever has in that same time span.

Wilson does leave a situation with explosive receivers. DK Metcalf and Tyler Lockett, both Pro Bowlers, were graded 12th and 13th by Pro Football Focus last season as they combined for 148 catches and 2,142 yards.

Quite a day in Denver, where Jerry Jeudy reacted to the news of Aaron Rodgers returning to the Packers and Russell Wilson being traded to the Broncos. pic.twitter.com/QudTrxqlE6

But Wilson enters another situation with impressive weapons. The Broncos also can turn to Courtland Sutton, Jerry Jeudy and Tim Patrick, all who have shined at different moments.

Sutton is a former Pro Bowler who will be entering his fifth year in the league. With 776 yards and two touchdowns on 58 catches a season ago, he was 35th among receivers by FO’s DYAR metric.

Patrick has steadily earned a more prominent role in Denver’s offense the past few years. While ranking 20th in DYAR, he caught 53 passes for 734 yards and five touchdowns last season.

Jeudy will be entering his third season after being drafted in the first round out of Alabama. After catching 52 passes for 856 yards and three touchdowns as a rookie, he injured his ankle in Week 1 and didn’t have quite the same impact in 2021.

Sutton, Jeudy and Patrick all have a strong chance to shine with an upgrade at quarterback. After 11 different starters for the Broncos since Peyton Manning retired before the 2016 season, Wilson provides the team stability at the position.

Following a four-year, $140 million extension in 2019, Wilson has $51 million over two years remaining on his deal. But even with that contract in consideration, the Broncos have the eighth-most cap space with over $26 million, according to Spotrac.

According to ESPN, the trade means the Seahawks will take on $26 million in dead money. That would be the second-most ever behind Carson Wentz’s $33.8 million.

The possibility of Wilson leaving Seattle dates back to last off-season when he expressed his desire to be surrounded by better pass protection. That may not be as much of a concern in Denver.

The Broncos may lose some offensive line help, with starting right tackle Bobby Massie set to be a free agent this offseason. However, Wilson’s mobility compared to former Broncos quarterbacks Teddy Bridgewater and Lock should also be an asset.

It wasn’t immediately clear which picks the Seahawks will receive in the trade. But if the Broncos did surrender the ninth overall pick in this year’s draft, Seattle has a chance to find its next franchise QB.

This year’s class of rookie quarterbacks isn’t particularly strong. However, the likes of Liberty’s Malik Willis (+5000), Pitt’s Kenny Pickett (+8000) and Cincinnati’s Desmond Ridder (+10000) are among the prospects with high NFL Draft odds that could potentially be taken first overall.

Willis, in particular, would be an especially interesting pick for the Seahawks at No. 9. He possesses exceptional accuracy downfield and mobility. These traits would blend in well with the Seahawks’ pass catchers and lack of protection up front.

Willis’ patience in the pocket and ability to read defenses has been a concern, so he would ideally land in a spot where he doesn’t have to play right away. With Lock as a stopgap quarterback and Fant and Harris providing boosts to the team, Willis could learn the NFL game while the Seahawks could be patient with him.