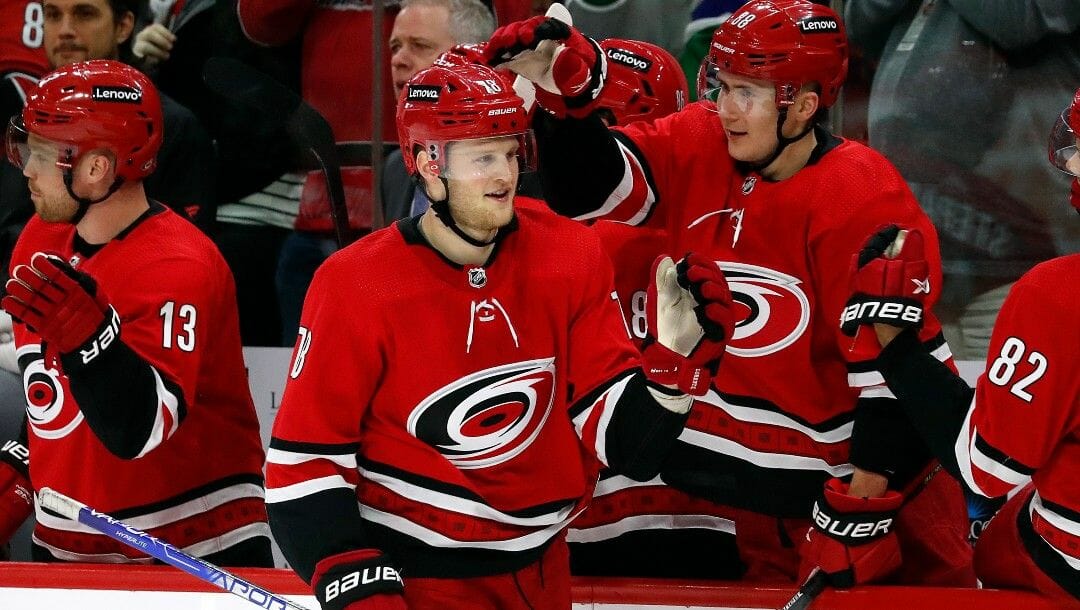 After being humiliated in all three regular-season encounters against Carolina, the Boston Bruins have a point to prove in their first-round series against the favored Hurricanes.

The Hurricanes are -120 favorites, according to NHL playoff odds, to oust the Bruins. Carolina enjoyed a sensational 8-2-0 run in the final 10 games, capping off what was an outstanding regular season.

Almost as good both home and away, the Hurricanes enter the playoffs brimming with confidence. Rod Brind’Amour’s team had the third-best away record (25-12-4) and fifth-best home record (29-8-4).

The Bruins were also road warriors and had the sixth-best away record, going 25-13-3 over the course of the year.

Had it not been for Frederik Andersen’s recent lower-body injury which will prevent him from starting Game 1 on Monday evening, Carolina would be more prohibitive favorites when it comes to NHL odds for the series.

When you look up the definition of whitewash in the dictionary, you’ll find a picture of the Boston Bruins running for cover, looking for a way to escape the Hurricanes’ relentless onslaught.

Carolina beat up on Boston this season, winning all three games by a combined 16-1 score. The first ended 3-0, the second 7-1 and the third, yet another shutout, this time by a 6-0 margin.

Aside from hits, Boston was outclassed in pretty much every other facet, begging the question, can the Bruins find a way to bridge the wide gap when they travel to Carolina on Monday night?

Andersen will not play on Monday night. That much is known. He hit the ice on Sunday for the first time since sustaining a lower-body injury against Colorado on April 16.

However, the date of his specific return is unknown. The Hurricanes will either start Game 1 with Antti Raanta or rookie Pyotr Kochetkov, who made his NHL debut on April 23, less than two weeks ago.

Kochetkov, with a 3-0-0 record, 2.42 GAA and .902 save percentage, has been solid in the inchoate stage of his NHL career. But surely it’s too soon to give him the nod in Game 1 of the Stanley Cup playoffs.

Raanta will probably start Game 1 for the favored Hurricanes.

The Bruins also have a goaltending dilemma to siphon through.

Both Jeremy Swayman and Linus Ullmark made 41 starts and shared the load in the regular season. Swayman and Ullmark performed well, with both netminders among the top 10 GAA.

Boston will probably go with whichever goaltender performing the best on that given day, rotating on a game-to-game basis if need be. Historically, that’s never been a winning formula at this time of year. Ullmark, who has played well in recent weeks, should get the Game 1 assignment.

Even if Andersen is unable to return early in the series, the Hurricanes should have just about enough to get by the Bruins.

NHL Playoff Scoring Records: Most Points in a Playoff Series