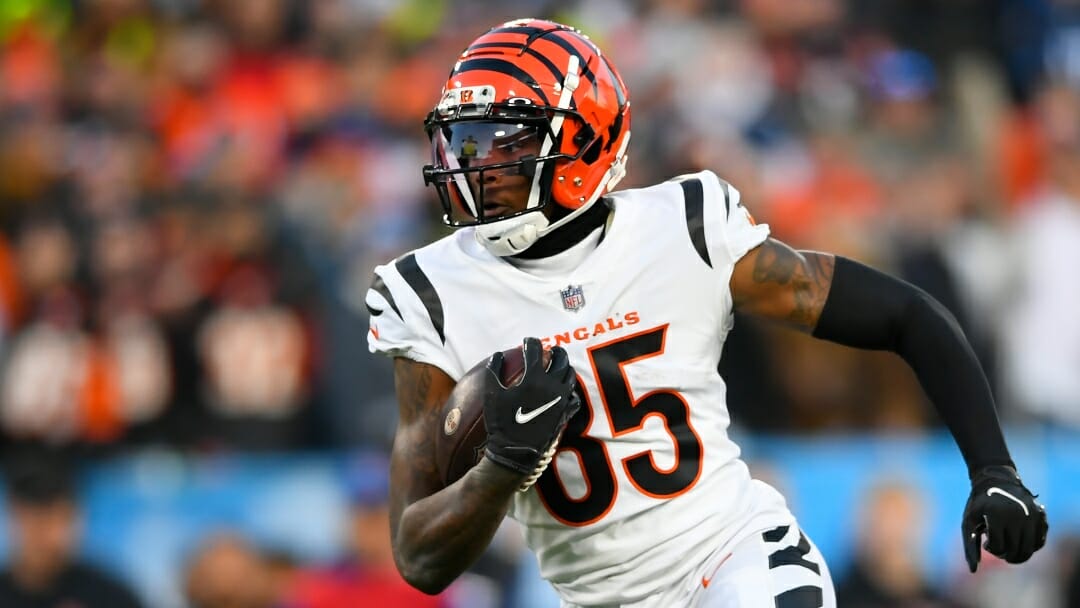 Will Tee Higgins surpass this total, or will the Los Angeles Rams defense shut Higgins down? Read on to find out how to bet Higgins’ receiving total.

Higgins Has Been Remarkably Consistent Down the Stretch

Higgins was shut down in the Bengals’ playoff game against the Las Vegas Raiders, catching just one pass for ten yards. That game was an outlier, however. Higgins has gone over 68.5 receiving yards in eight of the last 12 games he played.

Two things make me think Higgins could surpass 68.5 receiving yards. For one, the Rams’ best defensive back, Jalen Ramsey, will likely line up against Ja’Marr Chase, which could open things up downfield for Higgins.

The second-year wideout gets to go up against a Rams defense that allowed the 22nd most passing yards per game in the NFL this year (241.7). The second factor playing in Higgins’ favor is that the Bengals could be forced to abandon the run early on.

The Rams allowed the sixth-fewest rushing yards per attempt in the regular season, and Bengals running back Joe Mixon has run for 65 yards or fewer in seven of his past eight games. If the Bengals can’t run, they’ll have to air it out, and Higgins could be the primary beneficiary since Ramsey may lock up Chase.

The Rams Could Be Without A Key Defensive Player

Rams starting safety Taylor Rapp missed the NFC Championship with a concussion, and his status for the Super Bowl is still up in the air. The Rams have replaced Rapp with Eric Weddle, who was out of the NFL and playing pickup basketball to stay in shape before signing with the team.

The Bengals have one of the best young wide receiving corps in the NFL, and the Rams may have to try to stop them with a banged-up secondary. In the NFC Championship game, Los Angeles gave up over 68.5 receiving yards to both Deebo Samuel and Brandon Aiyuk. The Rams also struggled to contain Mike Evans in the divisional round, allowing him to rack up 119 receiving yards. The Rams have issues with elite receivers, leading me to believe both Higgins and Chase (80.5 yards, -115) can surpass their receiving total in the Super Bowl.

Ja’Marr Chase has gotten all the attention this year, but Tee Higgins has had a sensational second year in the NFL. The Clemson product could play a significant role in the Super Bowl if the Rams focus too much on Chase. I like the odds on Higgins’ to surpass 68.5 passing yards against a Rams defense that could be without its top two safeties.

You can wager on Higgins prop bets right now by visiting the BetMGM online sportsbook. Sign up today for a risk-free bet of up to $1,000.