Skip to content
Home » The Weekly Showstopper: Celtics vs. Nets, Heat vs. Bucks and Mavericks vs. Clippers

The intensity is about to go through the roof. Get ready to place your bets for the NBA playoffs.
Do the Celtics have a shot at upsetting the Nets after Jayson Tatum’s 50-point game?
Who could be the X-factors as the Heat battle the Bucks and the Mavs take on the Clippers?
We have everything you need to know for this action-packed first round.

It’s been rare to witness the superstar trio of Kevin Durant, Kyrie Irving and James Harden all on the court together, but we’ll finally get the opportunity in these playoffs. The Nets are finally at full health and hosting a Celtics squad that needed a 50-point game from Jayson Tatum to defeat the Wizards. If Boston had Jaylen Brown for this series, it might be a different story, but the combo of Tatum, Kemba Walker and Evan Fournier is not going to be able to match the Nets’ firepower. Brooklyn also made a savvy pickup by adding Mike James, who’s made an immediate impact with his scoring and playmaking in just a month since he joined the team.

The Nets led the season series 3-0 against the Celtics, with the two teams combining for an average points total of 217. Brooklyn (28-8 at home) will look to push the pace here and force Boston to keep up. Irving and Harden should have an easier time getting into the paint since the Celtics’ best rim protector, Robert Williams, continues to be sidelined with a nagging toe injury.

This series will likely go down as the biggest defensive slugfest and possibly the first-round show stealer. The Bucks held a 2-1 edge over the Heat (although Jimmy Butler didn’t play) in their season series, with Jrue Holiday and Khris Middleton proving to be the difference-makers in Milwaukee’s two wins. Revenge will definitely be on Giannis Antetokounmpo’s mind after the Heat dominated the Bucks in the 2020 Eastern Conference Semifinals.

Despite last year’s shocking result, we’re not in the bubble this time, and the Bucks will benefit from their home-court advantage and the two-way presence of Holiday, who wasn’t on the team last year. Losing Victor Oladipo in April was a big blow for the Heat, who are 8-2 in their last 10 games but have struggled on the road, where they went 19-17 this season.

If you’re scouring for a potential first-round upset, the Mavericks make for a sneaky bet. Dallas went 7-3 over its last 10 regular-season games, while Los Angeles wrapped up with a mixed 4-6 record. Paul George, who is no stranger to some un-clutch playoff performances, shot 32 percent from the field over that stretch. The Mavericks are also 21-15 on the road and hold a 2-1 advantage in head-to-head matchups with the Clippers this year. One X-factor could be Mavs sharpshooter Tim Hardaway Jr., who has been on fire in the month of May, averaging 20.9 points and 44.9 percent from 3-point range.

Much like Giannis in Milwaukee, Luka Doncic will be trying to avenge Dallas’ 4-2 series defeat to Los Angeles in last year’s playoffs. It might be asking a lot for Dallas to knock the Clippers out in the first round, but there will be a few games that could surprise us all, given Dallas’ high-octane offense powered by Luka and their improved shooting. 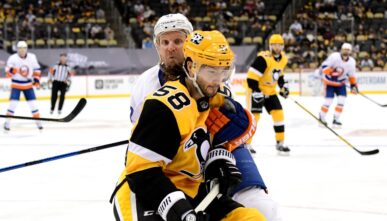