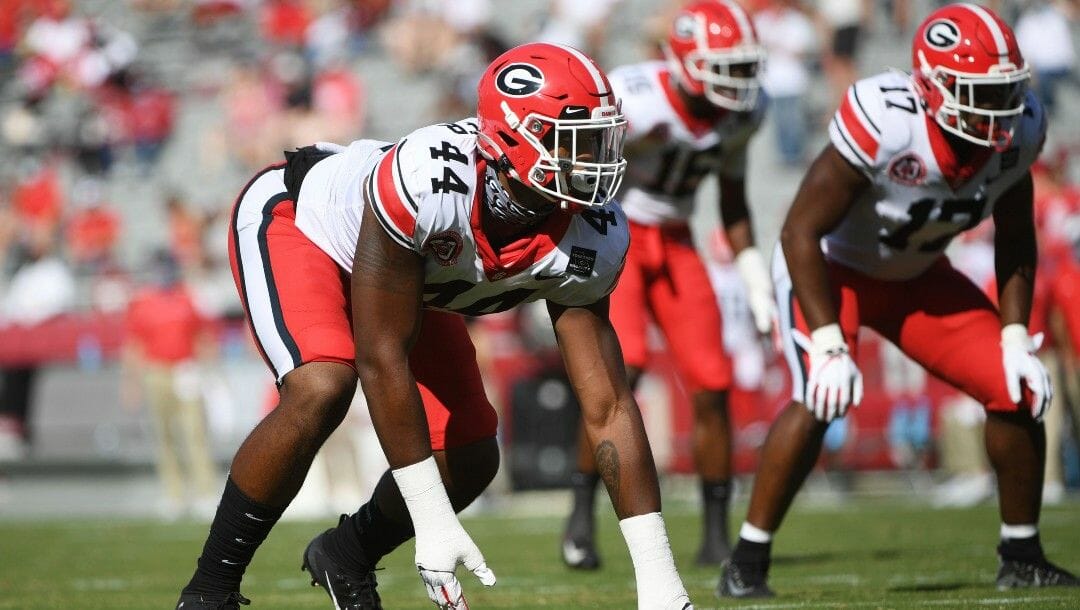 Late in the fourth quarter, his team leading by one possession, Travon Walker lined up over the center. And yet he was in a prime position to pressure the quarterback.

The Georgia defensive lineman, who’s among the top candidates to be selected high in this year’s NFL Draft, was looking to seal a win over Auburn. Though Walker was in the dead center of the formation, he looped around to the outside at the snap. With the edge sealed by his teammate, Walker needed just four seconds to take down quarterback Bo Nix.

Walker, though he could still expand his skill set, can add an explosive dimension to any pro defense.

Walker has the fifth-best NFL Draft odds to be selected first overall at +3300.

Travon Walker vs. Kayvon Thibodeaux vs. Aidan Hutchinson in the 40. 👀

The Falcons with the No. 8 pick are a logical landing spot for Walker. He is unlikely to go ahead of the likes of Hutchinson and Thibodeaux. But he may still go in the top 10.

Walker would be a fit in Atlanta. With defensive coordinator Dean Pees, the Falcons run a 3-4 scheme and could use a player with some versatility.

Walker lined up in the interior of Georgia’s four-man front often, meaning he could play defensive end for the Falcons. Walker also played on the edge and dropped into coverage, so he could also be plugged in as an edge linebacker as well.

Walker was involved in Georgia’s defense early in his career, but he truly broke out as a junior in 2021.

He started in all 15 of Georgia’s games on its way to a national championship. He ended the year with 37 tackles, 7.5 for loss, six sacks, and a team-high 36 hurries. He showed his endurance as well by playing 56% of the snaps, more than any other defensive lineman on the team.

Last season, Georgia ranked first in the nation in scoring defense (10.2 points allowed per game), second in total defense (268.9 yards allowed per contest), and seventh in sacks (3.27 per game).

He played nine games as a sophomore and totaled 13 tackles, two for loss, to go along a sack and a forced fumble. In his Freshman All-SEC season in 2019, he racked up 15 tackles, 3.5 for loss, with 2.5 sacks and a fumble recovery.

At 6-foot-5, 272 pounds, Walker is fast and physical. He can track down receivers and running backs in the open field, and he successfully can take on pulling interior offensive linemen and clog up rushing lanes.

Considering he can rush from the inside or outside, he stands out on defensive line stunts. He can also drop into coverage and use his 35.5-inch arm length to close down passing windows. He also is disciplined enough to maintain the edge when plays go away from him, meaning he can defend trick plays like reverses.

Therefore, for the team which drafts him, defensive play-callers can be creative.

On a third-and-14 this past year, Clemson was in an obvious passing situation. Walker lined up in the A gap, then shot over to the B gap and slipped between the guard and the tackle. He brought down quarterback DJ Uiagalelei and forced a fumble in the process.

Walker’s lack of pass rush moves is perhaps the weakest area of his game. Outside of a bull rush, he didn’t show much range in that aspect.

But that was all he needed sometimes. With a quality punch, matched with an arm extension that kept offensive linemen off balance, he could fly by opponents with sheer force.

On a third-and-10 against Missouri, Walker drove the opposing guard straight back onto the ground with that impressive bull rush. Quarterback Tyler Macon was brought down in four seconds.

If he expands his pass-rush move arsenal, Walker can be a versatile threat at the pro level.