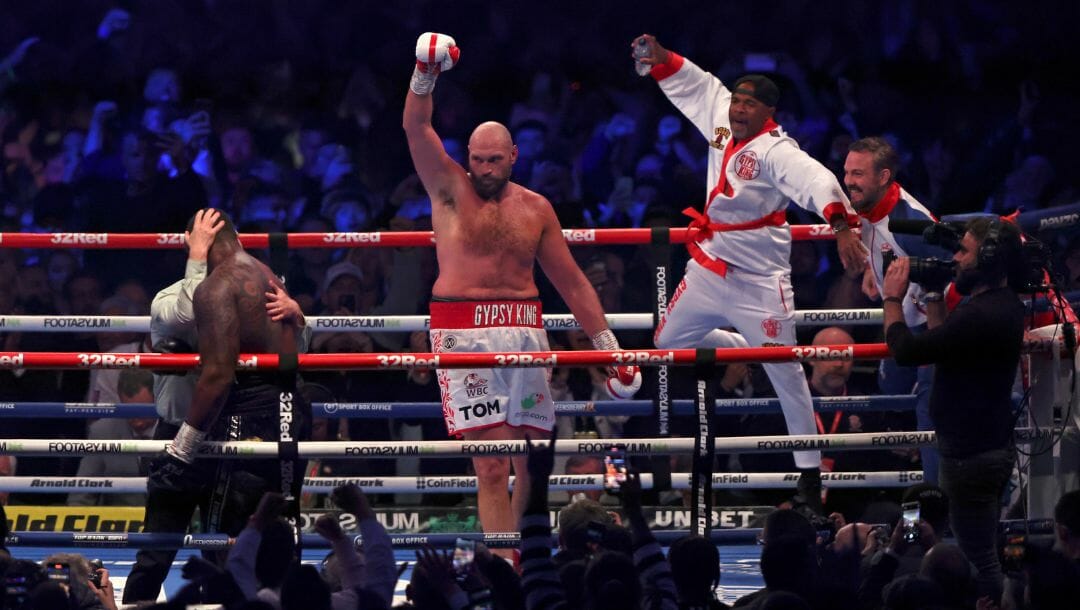 The third WBC World Heavyweight title defense of Tyson Fury (32-0-1) will be against a familiar foe, Derek Chisora (33-12), whom he previously beat two times in their earlier matchups in 2011 and 2014. This trilogy fight goes down this December 3 inside the Tottenham Hotspur Stadium in London, England. Fury is still undefeated in his boxing career in 33 fights, which makes him a top name in online sports betting through boxing odds.

Because of his immaculate record, Fury is the heavy favorite in the boxing betting odds at -2500, while Chisora is tagged as an underwhelming underdog at +1000. Another win for Fury over Chisora would set him up for a colossal clash with Oleksandr Usyk in 2023, while an upset victory for Chisora would keep his name relevant in the heavyweight division and possibly a rematch with Usyk.

In June 2010, Fury again fought John McDermott for a rematch, but this time, the vacant British Boxing Board of Control English Heavyweight Title was on the line. The “Gypsy King” scored a ninth-round TKO win over McDermott to claim his maiden boxing title. After this championship triumph, Fury collected three more wins over Rich Power (via points in September 2010), Zack Page (via unanimous decision in December 2010) and Marcelo Nascimento (fifth-round KO in February 2011).

In his ensuing fight, Fury was able to defend the WBO International Title against Christian Hammer in February 2015 via eighth-round retirement, thus clinching the biggest fight of his career as he challenged Wladimir Klitschko in November 2015. Fury got a career-defining upset victory over Klitschko with a unanimous decision to win to be the IBF, IBO, WBA and WBO World Heavyweight Champion of the world.

The “Gypsy King” went on a three-year sabbatical after that triumph over Klitschko and extended his winning streak to 27 after beating Sefer Seferi (in June 2018 via fourth-round retirement) and Francesco Pianeta (in August 2018 via points). Fury’s first minor dent on his record was a controversial split draw with Deontay Wilder in their December 2018 showdown for the WBC World Heavyweight Title. But since then, Fury has been on a tear.

Fury recaptured the WBO Inter-Continental Heavyweight Title in June 2019 after a second-round TKO win over Tom Schwarz before a dominant unanimous decision against Otto Wallin in September of the same year. Five months later, in February 2020, his rematch with Wilder finally happened, and the British made sure to leave no doubt after a seventh-round triumph to capture the WBC World Heavyweight Belt finally.

The two figured in a third bout in October 2021, and Fury officially closed this chapter among them with another victory, this time, an eleventh-round knockout. The “Gypsy King’s” latest win came at the expense of Dillian Whyte after a sixth-round TKO to defend his title in April 2022. This upcoming fight with Chisora will be Fury’s third official defense of the WBC title.

Chisora successfully stripped the title away from Williams with a second-round TKO victory and immediately defended it in September 2010 with a ninth-round TKO win over Sam Sexton in a rematch against him. Unfortunately, “War’s” rise to prominence was delayed by Tyson Fury, who dealt him his first career defeat in July 2011 along with his coveted BBBofC British Heavyweight Title.

The boxer, who was born in Mbare, Zimbabwe, redeemed himself with five successive wins over Hector Alfredo Avila (ninth-round TKO in April 2013), Malik Scott (sixth-round TKO in July 2013), Edmund Gerber (fifth-round TKO in September 2013), Ondrej Pala (third-round TKO in November 2013) and Kevin Johnson (unanimous decision in February 2014). Along the way, he obtained the WBO, EBU and WBA World Heavyweight Titles.

However, Chisora again encountered Tyson Fury in November 2014 and suffered the same fate as their first meeting; this time, it was a tenth-round corner stoppage where he lost his three titles. Following another defeat from Fury, Chisora amassed five straight wins against Beka Lobjanidze (first-round KO in July 2015), Marcelo Nascimento (via points in September 2015), Peter Erdos (fifth-round TKO in December 2015), Jakov Gospic (third-round TKO in December 2015) and Andras Csomor (second-round TKO in January 2016).

After this five-fight streak, the 38-year-old experienced a roller-coaster result from his next eight bouts by them at 4-apiece. Chisora defeated Dzaran Janjanin, Robert Filipovic, Zakaria Azzouzi and Carlos Takam, but he came up short against Kubrat Pulev, Dillian Whyte (twice) and Agit Kabayel. To stay in the hunt for a title shot, Chisora needed to pile the wins, and that is precisely what he did by stringing up three straight victories.

“War” was triumphant over Senad Gashi (unanimous decision in April 2019), Artur Szpilka (second-round knockout in July 2019) and David Price (fourth-round TKO in October 2019) to become the new WBO Inter-Continental Heavyweight Champion. His reign was cut short because Oleksandr Usyk handily beat him via decision in his first title defense in October 2020. Chisora had two more chances to regain his lost belt from Joseph Parker, but he was denied as he absorbed a split decision loss and a unanimous decision defeat from Parker in May and December 2021.

What secured Derek Chisora a third fight with Tyson Fury is his latest win over Kubrat Pulev, whom he defeated via split decision in their rematch in July 2022. The victory not only maintained his status as one of the top contenders and names in the division but also obtained him the vacant WBA International Heavyweight Title. He hopes that the third time’s a charm as he collides with Fury once more.

Tyson Fury vs. Derek Chisora: Tale of the Tape and Fight Analysis

Like their first two previous meetings, Tyson Fury will still carry the physical advantage of height and reach as he stands at 6-foot-9 and has 85 inches of reach against Derek Chisora’s 6-foot-1 and 74 inches frame. Fury is four years younger at only 34 years, while Chisora is now 38 years old. Additionally, the ”Gypsy King” holds a better record of 32 wins and one draw (with a 69% finishing rate) against the ”War” who has a record 33 wins and 12 losses (with a 51% finishing rate).

A lot has happened since their second meeting in 2014, but the two have contrasting fates because Fury went on to stay undefeated and win multiple world titles, while Chisora suffered seven defeats. Also, Fury is currently in his prime years, and Chisora is arguably at sunset now of his boxing career. This is the primary reason why oddsmakers put a massive discrepancy in their chances of winning this fight.

Stylistically, there will be zero to no adjustments from the two heavyweights, and their earlier bouts indicate what will happen in this third fight. Fury will maximize his enormous advantage in height and reach by keeping Chisora at bay with his stiff jabs and setting up his combinations with them; on the other hand, Chisora will charge forward to close the distance before throwing his power shots which are mainly hooks and overhand punches.

This match is unlikely to see all 12 rounds because it will end early with a stoppage. With Fury’s improved speed and more precise punches, Chisora will have a hard time containing the power of the ”Gypsy King,” whereas his speed and power have toned down as father time caught up with him, that is visibly seen in Chisora’s last few fights. Moreover, Fury has learned his lesson not to be caught against the ropes by either circling around or grabbing his opponent.