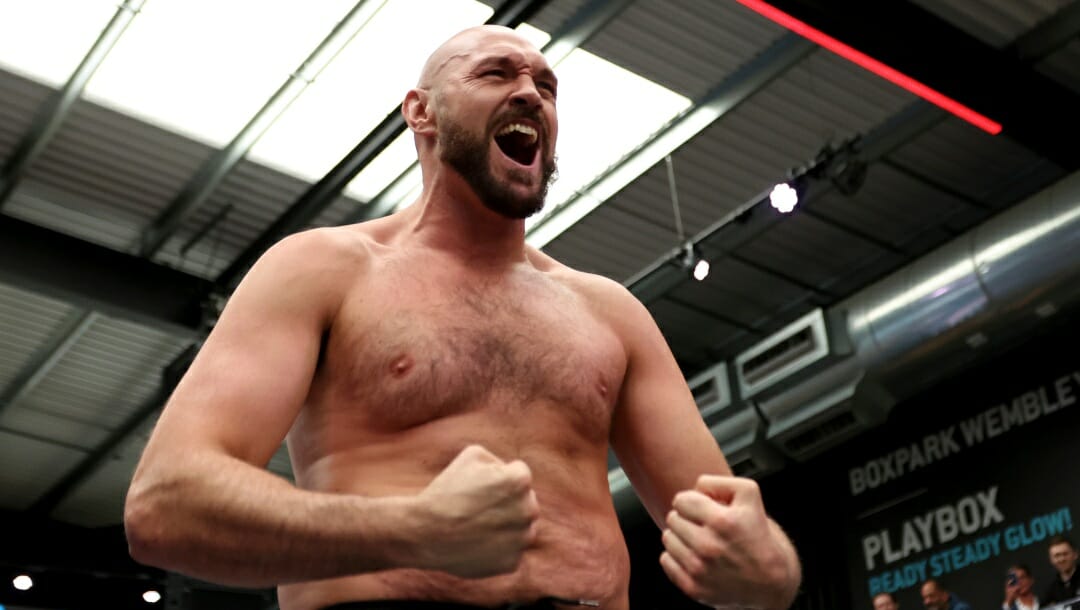 Brace yourselves, boxing fans. The ‘’Gypsy King,’’ Tyson Fury, is back inside the ring this weekend as he defends his WBC World Heavyweight Title against Dillian Whyte in front of a sold-out crowd at Wembley Stadium. Fury, who is coming off a knockout win over Deontay Wilder last October, is the heavy favorite (-600 as of April 19) in the boxing odds.

Here is an overview of his immaculate record so far, which is why he’s often an online boxing betting line favorite.

Tyson Fury’s next fight is against against Dillian Whyte on Saturday, April 23 at Wembley Stadium in Wembley, London.

Born in Manchester, England, Tyson Fury started boxing at the age of 10, almost simultaneous to him dropping out of school to help his father and brothers in labor work. He was initially trained by his father, a former boxer himself.

With enough experience and credentials, the British fighter of Irish descent made the professional jump in 2008 when he signed with promoter Mick Hennessy.

Tyson Fury made his professional debut in December 2008 against Bela Gyongyosi, and he successfully defeated him via a first-round TKO stoppage. After the impressive debut, he collected eight wins in a row in 2009 while piling up six finishes to maintain his perfect record.

The ’Gypsy King’ earned his maiden boxing title in June 2010 when he fought John McDermott for the vacanted British Heavyweight Title. Despite a point deduction in the 7th round of the match, Fury was able to knockdown McDermott in the 8th round before finishing him off in the 9th to officially claim the title.

Thirteen months later, after winning his first title, the British rising star got his hands on two other belts when he defeated Dereck Chisora via unanimous decision to become the British and Commonwealth Heavyweight Champion.

This was his 15th win in a row, with nine wins through KO/TKOs.

Five more consecutive wins over Nicolai Firtha (5th round TKO), Neven Pajkic (3rd round TKO), Martin Rogan (5th round TKO), Vinny Maddalone (5th round TKO) and Kevin Johnson (unanimous decision) helped boost the Brit’s popularity and landed his initial U.S. match against Steve Cunningham, of which he won by way of a 7th round knockout.

But after his career-defining over the Ukrainian great, the 6-foot-9 boxer was diagnosed with bipolar and obsessive-compulsive disorder, putting him out of the ring for almost three years.

He officially announced his return to the top of the boxing world by stopping Sefer Seferi and unanimously beating Francesco Pianeta in 2018 to set up a mega-fight with fellow undefeated fighter Deontay Wilder.

The pair’s first meeting ended in a controversial split draw after Fury was downed two times in the 9th and 12th rounds in their December 2018 clash.

Despite the call for an immediate rematch, Fury didn’t fight Wilder again until February 2020. He first faced Tom Schwarz and Otto Wallin in June 2019 and August 2019, as he defeated both by way of 9th TKO and unanimous decision, respectively.

When the second match against Wilder came in February 2020, Fury made sure to silence his doubters as he knocked down his opponent in rounds three and five before finishing the fight in round seven through a technical knockout to win the WBC World Heavyweight Title.

Despite the impressive victory in the second match, the two fighters found themselves in a trilogy fight last October 2021 — a classic back-and-forth matchup between two brawlers. Fury scored the first knockdown during the third round, but Wilder had his moment in the fourth round by downing the defending champion twice.

But after that two-knockdown setback, Fury reasserted his mastery over Wilder by ending the match in the 11th round when Fury landed the right hook that floored his challenger for good.

This time, Tyson Fury intends to add Dillian Whyte to his victim list and keep his perfect record unscathed, as he is the mandatory challenger to his crown.

With a five-inch height and a seven-inch reach advantage, Fury is the heavy favorite to win.

Along with his height and reach edge over the challenger, the defending champion’s fight IQ and unpredictable style predicated on his jab and footwork will make him even more dangerous and hard to beat.

Add his wealth of experience from mid-fight adversities to the mix, then you have a complete fighter at your disposal.