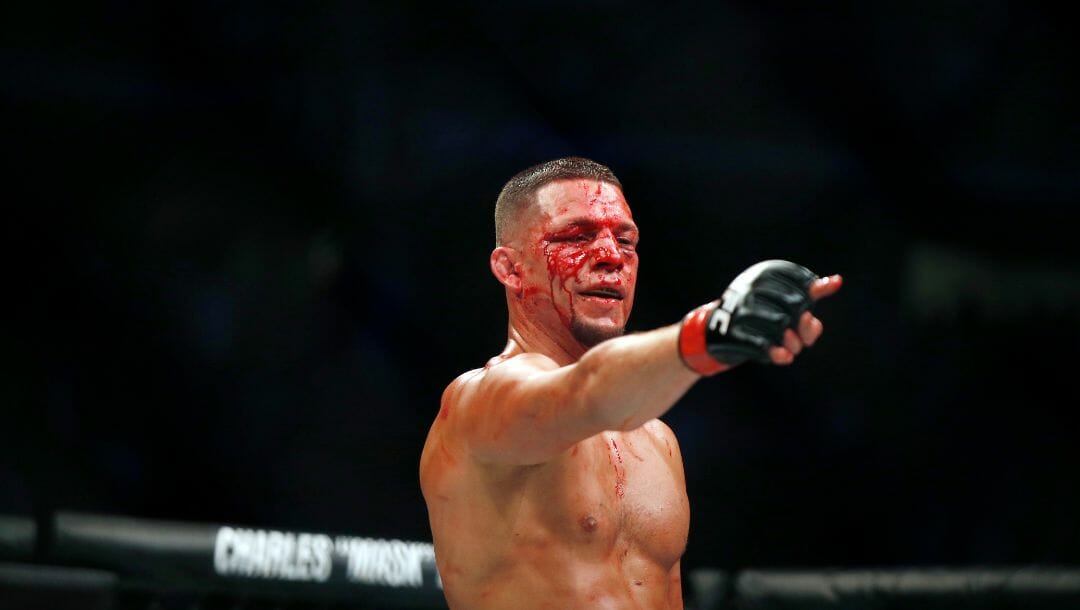 Nate Diaz’s last UFC fight will happen this weekend inside the T-Mobile Arena in Las Vegas as he faces the undefeated rising star Khamzat Chimaev in a welterweight bout. Diaz (21-13), who, despite being one of the crowd favorites in the UFC, will be the overwhelming UFC betting underdog at +725, while the unbeaten Chimaev (11-0) is the heavy favorite at -1200.

Despite the enormous UFC odds stacked against him, Diaz wants to spoil the full ascent of Chimaev and give fans one last memorable moment from his illustrious MMA career. Meanwhile, the Swedish phenom looks to add a win over another marquee name in his victim list and capitalize on his first main event feature.

In spite of a roller-coaster ride in his UFC career, Nate Diaz became a crowd favorite because of his grit and entertaining matches. He has 16 wins and 11 losses under the UFC banner. He is currently on a two-fight skid after receiving a third-round TKO loss from Jorge Masvidal in November 2019 and a unanimous decision defeat from Leon Edwards in June 2021.

The veteran fighter holds victories over the likes of Junior Assuncao, Rory Markham, Marcus Davis, Donald Cerrone, Jim Miller, Michael Johnson and Anthony Pettis. Diaz is also famous for his rivalry with Gray Maynard, whom he faced in a trilogy fight. During the Ultimate Fighter Series, Diaz won the first match over Maynard with a second-round guillotine choke in June 2007.

But Maynard avenged that loss in their rematch in January 2010 with a close split decision win. The Stockton superstar left no doubt in their third meeting by scoring a first-round TKO finish of his nemesis to close that chapter in his career officially. After that rivalry with Maynard, Diaz had new opposition to face in the form of Conor McGregor.

Diaz and McGregor were known as big talkers, which really helped build up the hype and excitement for their fight. Diaz submitted McGregor in their first bout in March 2016 with a second-round rear-naked choke, but the Irish superstar got one back in their rematch in August 2016 with a majority decision victory. This epic rivalry between the two MMA stars furthered their popularity and fanbase.

Undefeated rising star Khmazat Chimaev will be Diaz’s last opponent in his UFC career. The Swedish wrecking ball is racking up wins across his name, including five-straight victories since his promotional debut in July 2020. Chimaev hasn’t tasted defeat in his MMA career so far, and a win over Nate Diaz will significantly boost his name further in the sport.

Just like his first six wins outside of the UFC, Chimaev’s four UFC outings were stoppage wins over John Philips (second-round brabo choke in July 2020), Rhys McKee (first-round TKO in July 2020), Gerald Meerchaert (first-round knockout in September 2020) and Li Jingliang (first-round rear-naked choke in October 2021). Because of these impressive wins, his name generates a lot of hype.

His latest bout was his most challenging so far, after top welterweight and former title challenger Gilbert Burns pushed him to his limit with an entertaining encounter in April 2022. Burns’ grit and heart tested Chimaev. “Borz” showed that he could compete against the top contenders by unanimously winning against the Brazilian star. It was also his first career decision win after finishing all of his previous opponents.

Chimaev vs. Diaz: Tale of the Tape and Fight Analysis

Going into this match, Khamzat Chimaev and Nate Diaz will have almost identical physical attributes, with Chimaev only having a one-inch height advantage and two-inch leg reach edge, while Diaz will enjoy a one-inch reach advantage. The big discrepancy will be their age, as Chimaev will have the youth upper hand at only 28 years old, while Diaz is already at 37.

In terms of record and finishes, the apparent edge will be on Chimaev’s side due to his unblemished record of 11 wins and no defeat, including ten finishes. Diaz has 21 wins and 13 losses, with a wealth of experience attached to it. This abundance of MMA exposure for Diaz can play a big role in the fight, especially since the match will be a five-rounder.

Statistically, “Borz” lands more significant strikes of 7.89 per minute than Diaz’s 4.51, which converts to 59% and 45%, respectively. However, Diaz has the better striking defense as the Stockton native absorbs fewer strikes per minute with only 3.73 against Chimaev’s 4.3, which equals 52% and 41%, accordingly.

Looking at the grappling department, Chimaev will have the clear advantage of a 3.23 takedown average per 15 minutes (against Diaz’s 1.1), 66% takedown accuracy (compared to Diaz’s 30%), 100% takedown defense (41% for Diaz) and 2.69 submission average per 15 minutes (against Diaz’s 1.32). These grappling numbers were astonishing, knowing that Diaz has more submission victories in his career with 11, in contrast to Chimaev, who only has four so far.

Stylistically, it is a bad matchup for Nate Diaz because Khamzat Chimaev is better in every aspect of the fight game, be it in the striking department or the grappling department. The considerable age difference will also play a significant factor in the fight because Chimaev is just entering his prime years, while Diaz is at the latter stages of his career. This is also why “Borz” is the overwhelming favorite in this match.

Although Diaz had shown tremendous grit, heart and durability in his fights, particularly during his previous match against Leon Edwards when he almost scored a massive come-from-behind victory, it will be hard for him to stop the force Chimaev possesses. It will be a hard match to watch, especially if you are a Nate Diaz fan.