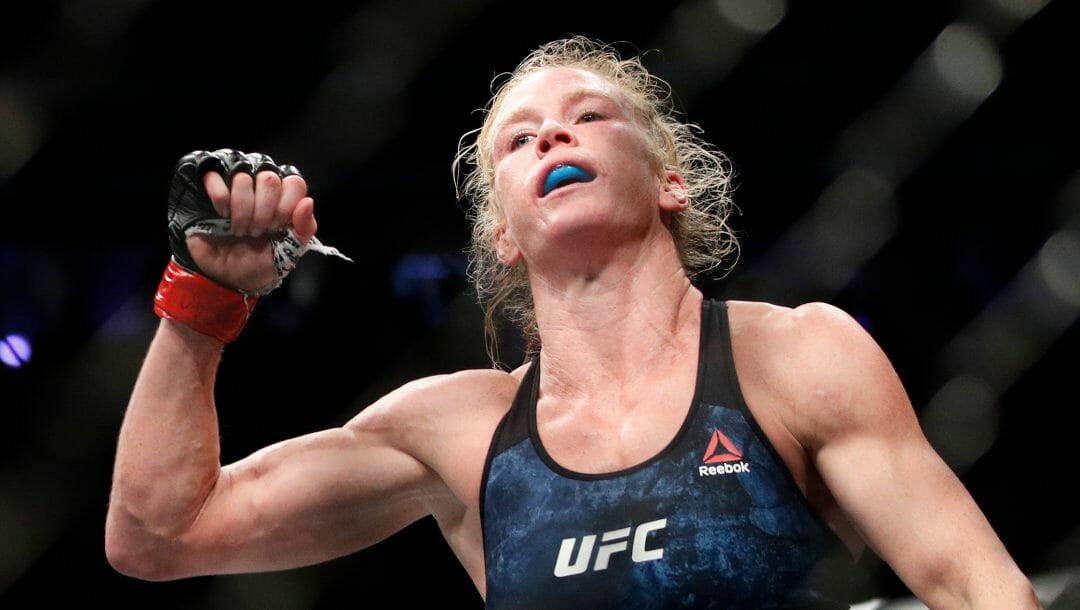 UFC odds have Holm as the favorite, but regardless it will be a great night for UFC betting.

Holly Holm is one of the most accomplished combat sports athletes in the world.

She has extensive boxing, kickboxing, and mixed martial arts experience, being the only fighter to hold a boxing world title and a UFC championship. Holm’s rise to fame in MMA came off her second-round knockout of Ronda Rousey in 2015.

She lost her next three consecutive fights to Miesha Tate, Valentina Shevchenko, and Germaine de Randamie. After those losses, Holm became more of a gatekeeper to the women’s bantamweight and featherweight divisions. She exposed Bether Correia, lost to Cris Cyborg, and beat the up-and-coming Megan Anderson.

Her last crack at UFC gold was against Amanda Nunes, who knocked her out in the first round. However, Holm has strung together two straight decision wins coming into this fight over Raquel Pennington and Irene Aldana.

Meanwhile, Ketlen Vieira has only lost twice in her UFC career. Vieira’s last loss went to a decision against Yana Kunitskaya, and her first was a knockout at the hands of Aldana. However, she has some impressive wins under her belt. Aside from her last victory over Tate, Vieira’s also beaten former UFC title contenders Sara McMann and Cat Zingano.

This bout will be one of the few in which neither fighter has a significant size advantage.

Both are 5-foot-8 but Holm will have a one-inch reach advantage. Holm has a 57% knockout win rate to Vieira’s 17%, but neither of them has significant knockout power in their hands. Holm is more of a volume puncher but can knock out her opponents with kicks. Vieira has a 33% submission win rate to Holm’s 0%, so if there is an unlikely submission, it’ll come from the Brazilian.

To illustrate their lack of power, Holm spends an average of 17:04 in the Octagon with a knockdown average of 0.15 per 15 minutes, while Vieira clocks in at 14:16 and has zero knockdowns per 15 minutes. At age 30, Vieira is ten years Holm’s junior.

Vieira will need to close the distance in this fight to have a chance. She throws slow looping punches, while Holm throws straight and will volume. We’ve seen in the past that Holm is comfortable staying on the outside and outpointing her opponents to victory. Aside from a submission advantage, Vieira also fights well on the inside, which plays into her getting in close.

There are a lot of exciting things at play in this contest.

At 40-years-old and with a 19-month layoff, it will be intriguing to see if Holm can shake off the ring rust. As Holm is essentially the championship gatekeeper, we’ll find out if Vieira takes that next step towards becoming a title contender.

This fight is Holm’s to lose, but the sportsbooks aren’t giving us much value on a 40-year-old coming off a long layoff. The value is on Vieira, and if she can make this a fight in a phonebooth, I could see the underdog raise her hand in the end.