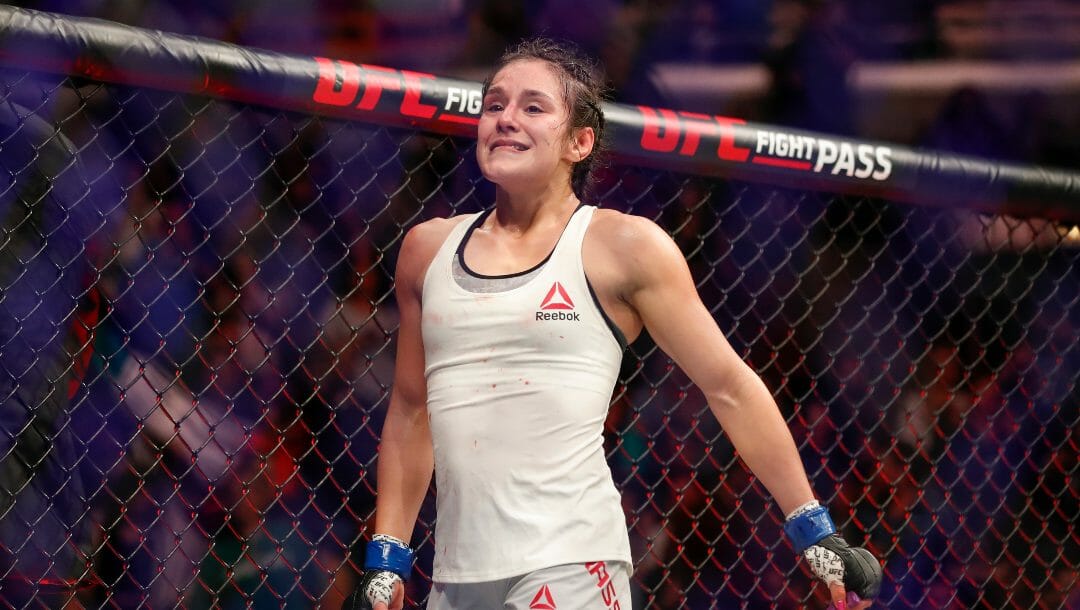 The race at the top of the rankings heats up in the UFC women’s flyweight division as number five-ranked contender Alexa Grasso (14-3) meets the number six-ranked challenger Viviane Araujo (11-3) this weekend inside the UFC Apex to improve their respective MMA odds towards title contention.

Grasso, the UFC betting favorite at -225, is on a three-fight win streak, while Araujo is fresh off a bounce-back victory in her last outing, which makes her the betting underdog at +185.

Alexa Grasso was an undefeated fighter when she entered the UFC in 2016 and paraded an 8-0 (including four TKO/KO wins) in different MMA organizations. Grasso had an up-and-down result in her first six UFC outings. She made her Octagon debut against Heather Clark in November 2016, scoring a unanimous decision win.

Then, found herself on the other side of a decision loss to Felice Herrig in February 2017 before bouncing back with a close split decision victory over Randa Markos in August of the same year. The Guadalajara, Mexico native suffered her second UFC loss at the hands of Tatiana Suarez, who submitted her in the first round of their match in May 2018.

The Lobo Gym MMA athlete swiftly got a victory back when she unanimously beat Karolina Kowalkiewicz in June 2019 to claim her third win in the UFC. This huge win from Kowalkiewicz has set Grasso up with a big-time fight with Carla Esparza in September 2019. However, she fell against her as Esparza took the majority decision win.

This close loss to Esparza became a springboard for Grasso to go on a streak of her own. Since then, she has collected three consecutive wins, beginning with a unanimous decision triumph over Ji Yeon Kim in August 2020.

She followed it up with another decision win over Maycee Barber in February 2021 to gradually climb up the rankings. The Mexican’s latest and most impressive win by far under the UFC came against Joanne Wood, whom she submitted in one round this past March 2022 to sit in the fifth spot of the women’s flyweight division.

After going 6-1 (all wins are stoppages) in her first seven professional fights outside of the UFC, Viviane Araujo earned her roster spot in 2019. She carried this success inside the Octagon when she knocked out Talita Bernardo in her May 2019 debut.

Then, she unanimously beat Alexis Davis in July 2019 to collect her second straight win under the promotion. Araujo’s ascent to the top of the rankings was halted by Jessica Eye, who defeated her unanimously in December 2019 and absorbed her first UFC loss and second overall.

The Brazilian fighter rebounded quickly from that setback as she scored unanimous decision victories over Montana De La Rosa in September 2020 and Roxanne Modafferi in January 2021. After that, “Vivi” received another loss to her record with a decision setback courtesy of Katlyn Chookagian in May 2021.

Araujo is fresh off a victory against Andrea Lee this past May 2022 after a dominant win to barge her way into the number six place of the weight class.

Grasso vs. Araujo: Tale of the Tape and Fight Analysis

The physical frame of Alexa Grasso and Viviane Araujo are almost identical, with Grasso enjoying a one-inch height and another one-inch of leg reach advantage, while Araujo will look to maximize her two-inch reach edge during the bout. Stylistically, it will be a boxer versus a Brazilian Jiu-Jitsu fight.

In terms of significant strikes, Grasso lands more at 4.92 per minute compared to Araujo’s 4.76, which accounts for 43% and 48%, respectively. However, in terms of defense, the Mexican has the upper hand as she only absorbs 3.79 per minute (63%), while the Brazilian receives more strikes at 5.13 per minute (58%).

When it comes to grappling, there is a vast discrepancy in numbers, mainly because of Araujo’s BJJ background. “Vivi” has a 2.23 takedown average per 15 minutes (against Grasso’s 0.54), a 60% takedown accuracy (compared to Grasso’s 57%), and a 90% takedown defense (against Grasso’s 60%). But the much higher-ranked athlete surprisingly has a slight edge in submission average per 15 minutes with 0.67 in contrast to Araujo’s 0.60.

Despite this enormous difference in the grappling department, I still see Alexa Grasso prevailing in this fight over Viviane Araujo, much like the oddsmakers have done in various online sportsbooks. Her precision and timing will be a problem to Araujo throughout the match, and the takedown defense will be enough to stop her attempts.

Grasso will maximize her boxing background to keep her Brazilian foe at bay, score another victory in the UFC and climb up the ranking to inch closer to a title shot.