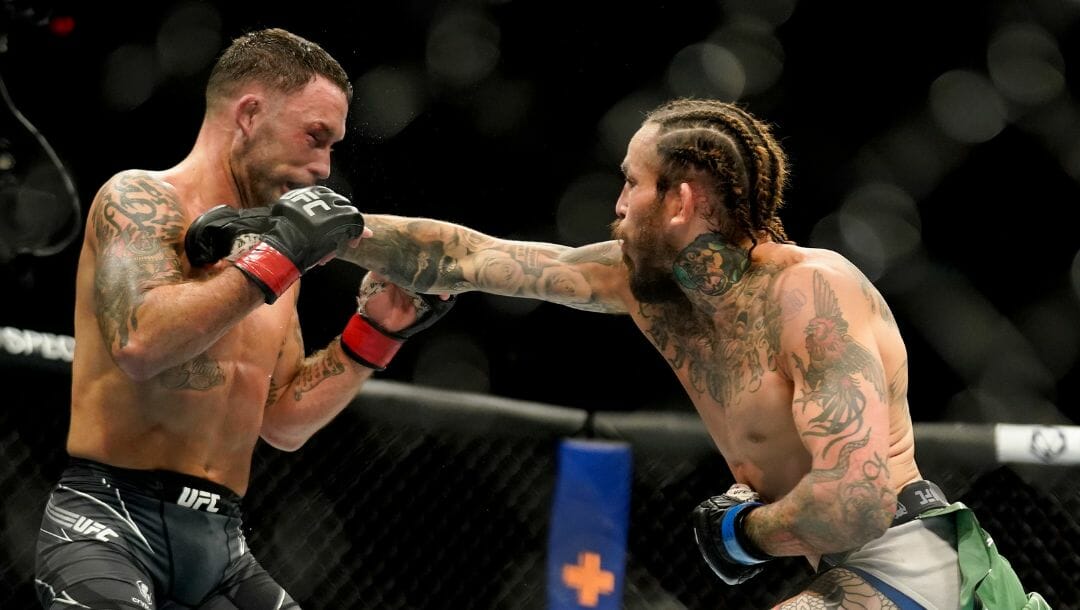 Number-five ranked Marlon Vera (19-7) will be facing the number-eight contender Dominick Cruz (24-3) in a high-level 135-pound match this weekend inside the Pechanga Arena in San Diego further to improve their MMA odds for a potential title fight.

Cruz, the former UFC Bantamweight Champion, is coming in as the UFC betting underdog at +180, while Vera, the higher-ranked contender, will be the favorite to win at -225.

Marlon Vera started competing in the UFC in November 2014, when Marco Beltran rudely welcomed him with a unanimous decision loss in his debut fight. Since that uneventful defeat to Beltran, he appeared in 18 bouts and accumulated a UFC record of 13 wins and only six losses.

His other five setbacks under the Las Vegas-based promotion were all via unanimous decision losses and are courtesy of Davey Grant (February 2016), John Lineker (October 2017), Douglas Silva de Andrade (February 2018), Song Yadong (May 2020) and Jose Aldo (December 2020).

Vera is currently riding a three-fight winning streak dating back to June 2021, when he had a revenge victory over Davey Grant in their rematch (via unanimous decision). He finished Frankie Edgar with a picture-perfect front kick knockout in the third round of their November 2021 showdown.

‘’Chito’’ Vera’s most recent win was against Rob Font this past April. He walked away with a masterful unanimous decision triumph over the fellow banger in the main event of their bantamweight encounter.

Former WEC and UFC Bantamweight Champion Dominick Cruz comes into the bout riding a two-fight winning streak. The ‘’Dominator’’ became the inaugural 135-pound champion when he defeated Urijah Faber unanimously in their rematch in July 2011 when the UFC merged with the WEC.

Cruz fended off the challenge from Demetrious Johnson and successfully defended the title in October 2011. Unfortunately, he was forced to relinquish the title in January 2014 due to injury. After a three-year absence, he returned inside the Octagon and gifted Takeya Mizugaki with a first-round knockout victory in September 2014.

This impressive victory earned Cruz another shot at the title against T.J. Dillashaw in January 2016, and he successfully reclaimed his title with a close split decision win. After winning the title, he defended it again over Urijah Faber in their third meeting with another unanimous decision victory.

His reign, though, was short-lived as Cody Garbrandt dethroned him in December 2016 by a unanimous decision in a classic title fight. After that title loss, Cruz went on another four-year hiatus due to injury and returned in May 2020 to face Henry Cejudo for the Bantamweight title. Unfortunately, he absorbed another defeat and sustained a second-round TKO finish.

With no sustained injury from his match with Cejudo, Cruz immediately returned to action in March 2021 and scored a split decision win over Casey Kenney. His most recent triumph was at the expense of Pedro Munhoz, whom he defeated via unanimous decision.

Vera vs. Cruz: Tale of the Tape and Fight Analysis

The 29-year-old Marlon Vera will have a two-and-a-half-inch and three-and-a-half-inch leg reach advantage over the 37-year-old Dominick Cruz. However, in terms of TKO/KO finishing rate, Cruz has a huge lead over Vera as the former parades a 30% rate while the latter only has 16%.

Vera edges out Cruz in the significant strikes landed per minute with 4.33 compared to his 3.82, which translates to 51% and 33% percentage rates, respectively. But defensive-wise, the former champion only absorbs 2.56 strikes per minute and has 71% of defense, while ‘’Chito’’ receives more strikes at 4.99 per minute and only has a 50% defense.

With all the statistical numbers presented above, expect this match to be an instant classic as both fighters are willing to stand and trade blows. Marlon Vera will bring his relentless pressure of moving forward, while Dominick Cruz will display his famous and patented unorthodox footwork.

However, I think Marlon Vera will have an edge in this match because he just entered the prime of his fighting career at 29 years old, while the former champion continues to fight at the latter part of his career at 37 years of age.

Also, I expect to see Vera utilize every inch of his physical attributes over Cruz and pour on the punches and leg kicks to put him at bay, thus cruising his way to another victory.