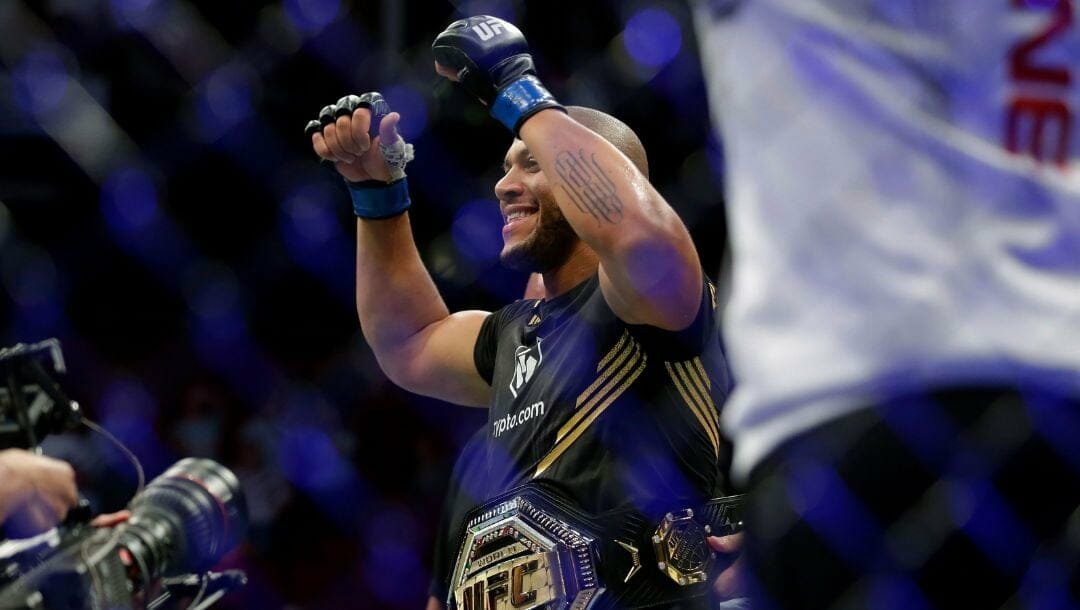 History is about to unfold this weekend as the UFC stages its first-ever event in Paris, France, where two heavyweight contenders, Ciryl Gane (the UFC betting favorite at -550) and Tai Tuivasa (the underdog at +400), headline the momentous card inside the Accor Arena.

A former Muay Thai competitor, Ciryl Gane transitioned smoothly to MMA in 2018 and captured the TKO MMA title in his maiden match. He successfully defended his title in consecutive fights to finally earn his spot in the UFC in 2019 as the promotion officially signed him.

The Frenchman didn’t waste any time and picked up three victories when he submitted Raphael Pessoa (first-round arm-triangle choke) in August 2019 during his debut, Don’Tale Mayes (third-round heel hook) in October 2019, and a unanimous decision win over Tanner Boser in December 2019.

Gane received his first real test in the UFC when pitted against former heavyweight champion Junior Dos Santos in December 2020, but he was able to cruise past Dos Santos by stopping him in the second round via TKO.

The MMA Factory representative proved that he was too much by dominating Lewis in their title showdown in August 2021 and eventually stopped him in the third round via TKO to set up a gigantic unification title bout with Francis Ngannou. Unfortunately, Gane suffered a unanimous decision loss to absorb his inaugural defeat in his MMA career and come up short in his title aspirations.

After a flawless start in his MMA career with six stoppage victories and dominating the Australian circuit, Tai Tuivasa caught the attention of the UFC, which welcomed him aboard in 2017.

Tuivasa immediately delivered wins in his first three bouts under the promotion by stopping Rashad Coulter (first-round KO in November 2017) and Cyril Asker (first-round TKO in February 2018) before unanimously winning over Andrei Arlovski in June 2018.

But the Aussie powerhouse also experienced a rough run when he sustained three consecutive losses at the hands of Junior Dos Santos (second-round TKO) in December 2018, Blagoy Ivanov (unanimous decision) in June 2019 and Serghei Spivac (second-round arm-triangle choke) which halted his rise to the top of the rankings.

Tuivasa’s latest victim is Derrick Lewis, who he knocked out in February 2022 via a vicious elbow strike that sent the former title challenger to another dimension. This impressive win has catapulted him to the number three spot in the heavyweight rankings, and secured this massive showdown with Ciryl Gane.

Gane vs. Tuivasa: Tale of the Tape and Fight Analysis

In terms of the physical physique, the Frenchman almost has the upper hand in every aspect, with a two-inch height advantage (6’4 against 6’2), a six-inch reach (81 inches compared to 75 inches), and a two-and-a-half leg reach edge (42 inches over 39.5 inches) against the Australian knockout artist. The only lead that Tuivasa has over Gane is his weight at 18-pounds heavier.

“Bam Bam” will also parade an almost perfect KO/TKO percentage of 93% compared to “Bon Gamin’s” 40%, but Gane will have the submission advantage as he has a 30% submission rate compared to Tuivasa’s 0. Although Tuivasa is known for his enormous power, Gane still holds the superiority in significant strikes of 4.83 landed per minute compared to the former’s 4.54. As to the defense, Gane will have the upper hand, with him only absorbing 2.27 strikes per minute, while Tuivasa receives 3.56.

It’s hard to argue with the odds that are in favor of Gane because of how good he is. Mainly thanks to his Muay Thai background, he is quick on his feet. Imagine a heavyweight fighter moving like a welterweight as he toys over them throughout the match.

However, no heavyweight could count Tai Tuivasa out because one shot is what he needs to take down any opponent, just as he did to Greg Hardy, Augusto Sakai and Derrick Lewis in his three previous fights. If he connects with his vicious shots, it’s almost over for his opponent.

Stylistically, this is an intriguing match for both fighters, but we may have seen this type of match before in the form of the Ciryl Gane-Derrick Lewis fight, where a powerful striker meets a more sophisticated and faster striker. That Gane-Lewis match might also be the fate of this heavyweight showdown.

Gane’s quickness will give Tuivasa a hard time landing his blows throughout the match as “Bon Gamin” uses his Muay Thai experience to circle and counter him with his own thunderous strikes.