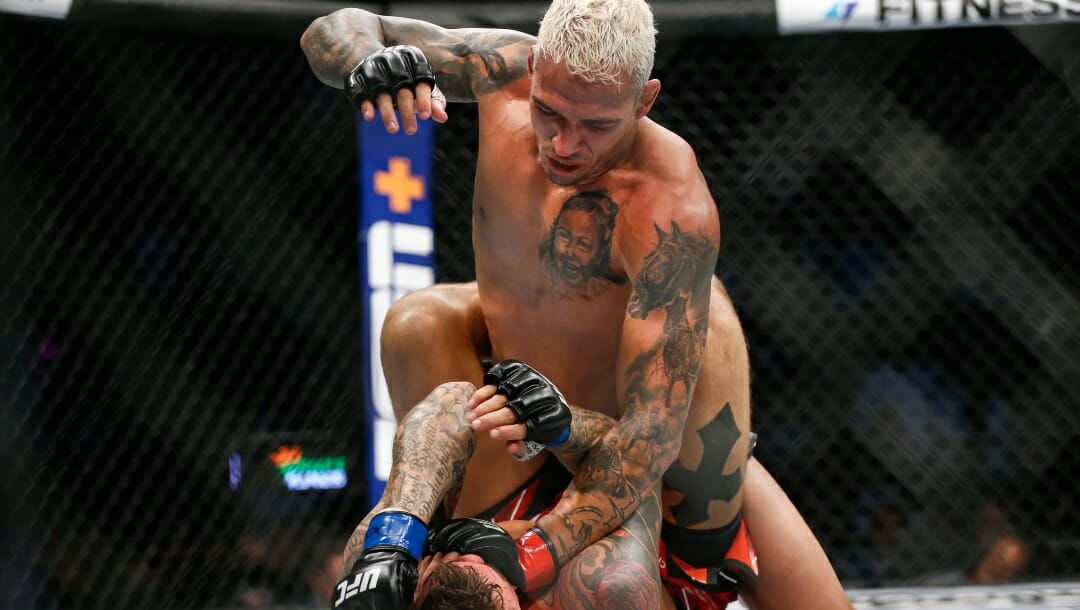 Combat sports fans will be at the forefront of UFC betting this weekend as the sport’s next major event goes down inside the Footprint Center in Phoenix, Arizona. The event is headlined by defending lightweight champion Charles Oliveira (32-8) against number one contender Justin Gaethje (23-3).

For the first time in three championship bouts, ”Do Bronx” is the favorite (-165 as of May 6) in the UFC odds to successfully retain his title for the second time.

The Brazilian title-holder secured the maiden defense of his throne in December 2021 against Dustin Poirier with a signature rear-naked choke submission win in the third round of the championship showdown.

Oliveira won the title in May 2021 after a come-from-behind victory over Michael Chandler. He was nearly finished in the opening round but somehow survived the early onslaught from Chandler. After barely making it to the second round, Oliveira landed a solid left hook early, which knocked down ”Iron Mike” before formally ending the fight with a barrage of punches.

Besides his ten-fight winning streak, which dates back to 2018, the 32-year-old champion holds the most submission wins in the UFC with 15.

Meanwhile, his latest challenger, Justin Gaethje, will be fully looking to capitalize on his second crack at the title. Khabib Nurmagomedov defeated the ”Highlight” in October 2020 for his initial title shot. After absorbing that loss, Gaethje immediately returned to the winning track by unanimously beating Michael Chandler last November 2021 in a masterful striking performance to set up this gigantic clash.

Charles Oliveira is pitted against a superior striker for the third straight bout. But the 155-pound champion has proved that he can take the heavy blows from the hard-hitting contenders, as we’ve seen from his two previous fights with Chandler and Poirier.

He also imposes his 41% grappling accuracy against every foe, which was the key to obtaining 15 submission wins. Simultaneously taking advantage of that grappling edge, his striking has also seen a significant improvement and now banners a 53% accuracy.

But, Justin Gaethje packs a different power in his hands that makes him a fearsome challenger. The “Highlight” has 19 wins via TKO/KOs out of his 23 total victories, mainly thanks to his 60% striking accuracy. Patented leg kicks were a big part of this precise pounding from Gaethje.

Additionally, the American will be carrying a decent takedown defense of 74%, which can play a huge role in stopping the takedowns from the BJJ Black Belter.

This fight between two of the best lightweights on the planet should produce another classic. It will also be a classic bout between a striker and a grappler, which could go either way.

Expect Charles Oliveira to exploit the grappling advantage over the power puncher challenger, just like Nurmagomedov did when he fought Gaethje.

At the same time, don’t be surprised if Justin Gaethje loads up on his strikes to end the fight right away potentially. His trademark leg kicks and one-shot knockout power will also be flaunted from the get-go.

With Gaethje’s previous background as a wrestler in college and a learning experience from the Khabib loss, I predict that the 33-year-old American would catch the champion with a power shot which will be the beginning of the end for Oliveira. The official verdict is a third-round TKO finish for Justin Gaethje.

Other fights scheduled on the main card will see reigning UFC Strawweight Champion Rose Namajunas defend her crown against her former tormentor, Carla Esparza, in a championship rematch. Their first meeting happened in December 2014 when Esparza submitted Namajunas in the third round via rear-naked choke.

The 115-pound queen will be using the two title wins from Zhang Weili to avenge her loss to Esparza. At the same time, the number two-ranked challenger currently rides five successive victories with wins over Virna Jandiroba, Alexa Grasso, Michelle Waterson, Marina Rodriguez and Xiaonan Yan.

Completing the main card casts are the lightweight bout between Michael Chandler and Tony Ferguson, a light heavyweight showdown of Mauricio Rua and Ovince Saint Preux and the lightweight clash of Donald Cerrone and Joe Lauzon.