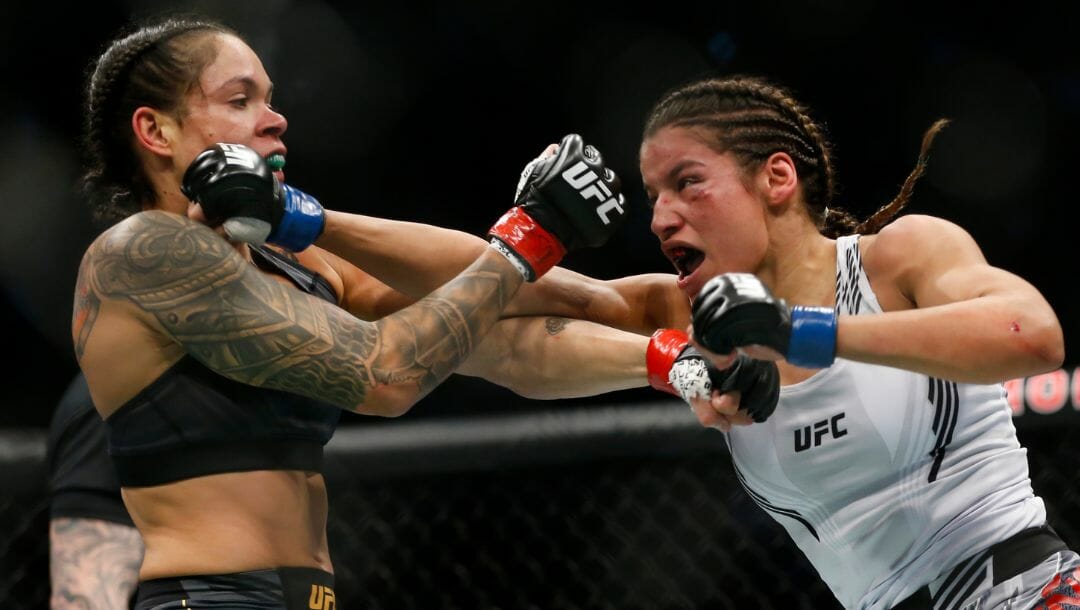 One of the most anticipated MMA championship rematches in recent memory goes down this weekend as reigning UFC Women’s Bantamweight Champion Julianna Peña (12-4) defends her title against former champion and now challenger Amanda Nunes (21-5) in the main event of UFC 277, inside the American Airlines Arena in Dallas, Texas.

Julianna Peña defied the MMA odds in their first meeting last December 2021, when she scored a massive second-round submission finish to claim the undisputed crown. Despite the gigantic victory last time, the champion will be the UFC betting underdog coming into the match as oddsmakers anticipate a bounce-back win from Nunes.

Julianna Peña’s road to the UFC came through the Ultimate Fighter, where she scored two stoppage wins over Sarah Moras and Jessica Rakoczy to earn her spot on the roster. She then picked up three straight victories against Milana Dudieva (first-round TKO in April 2015), Jessica Eye (unanimous decision in October 2015) and Cat Zingano (unanimous decision in July 2016).

Peña’s first UFC defeat came in January 2017 when Valentina Shevchenko submitted her in the second round via armbar, which delayed her career’s first potential title fight. After that loss to Shevchenko, she had a two-year break from action due to motherhood. The “Venezuelan Vixen” successfully returned inside the Octagon with a unanimous decision win over Nicco Montano in July 2019.

In October 2020, Peña sustained another defeat at the hands of Germaine de Randamie due to a guillotine choke which ended the match in the third round, but three months later, she immediately went back to winning ways by beating Sara McMann with a rear-naked choke finish to earn her title shot against Nunes and eventually crafting that huge upset win over her.

Amanda Nunes has been a wrecking ball in the UFC before that shocking loss to Peña in her latest fight. She started her career under the banner with two consecutive first-round stoppage wins against Sheila Gaff and Germaine de Randamie. However, Nunes suffered a loss in her third UFC bout when Cat Zingano TKO’ed her in the third round of their September 2014 match.

Since that setback, the “Lioness” became unstoppable as she strung up 12 straight wins, on her way to becoming a two-division world champion and the undisputed women’s pound-for-pound fighter in the world. Nunes submitted Meisha Tate in July 2016 to capture the women’s bantamweight crown and defended it three times over Ronda Rousey, Valentina Shevchenko and Raquel Pennington.

She then moved up to the featherweight division to challenge Cris Cyborg for the title, and Nunes only needed 51 seconds in the opening round to knock her out and claim the champ-champ status. Before losing to Peña, Nunes successfully defended her two titles against Holly Holm, Germaine de Randamie (in their rematch), Felicia Spencer and Megan Anderson.

Peña vs. Nunes: Tale of the Tape and Fight Analysis

For the fight analysis of this championship rematch, there’s no need to dive into the physical attributes and identify who has the advantage among the two fighters regarding height and reach. Also, I won’t discuss the overall statistical numbers of their striking and grappling accuracy; instead, I’ll review what went down during the first meeting.

Julianna Peña scored the massive upset victory last time because she stuck to her game plan of going toe-to-toe against the feared Amanda Nunes. She withstood the pressure from the former champion and did not yield from it, much like what Nunes’ previous opponents did. The “Lioness” had a good start in the fight, chopping down the lead leg of the “Venezuelan Vixen” and controlling her on the ground.

But the Sikjitsu representative weathered the early barrage from the champion; she survived a submission attempt from Nunes and even threatened with her submission maneuvers on the ground in the latter part of the opening round. The 3:35 of control time in the first round made Amanda Nunes lose a significant amount of energy as she went flat-footed during the second round.

The fatigue of Nunes was exposed when Peña decided to exchange strikes in the early stages of the following round. At this point, the challenger was connecting successfully with several powerful jabs. These jabs have allowed Peña to apply the pressure and put Nunes on retreat. For the first time in a long time, Nunes found herself in trouble as she was back footing.

This rare retreat from Nunes allowed Peña to capitalize on the opportunity by securing the takedown and maneuvering into a rear-naked choke submission, eventually making her the new champion. After the exciting fight, the numbers revealed that Peña had outstruck Nunes with 90 total strikes compared to her 58.

But this upcoming rematch between the two top women’s bantamweight fighters in the world will have a different narrative. As much heart and composure Julianna Peña displayed in the first match, Amanda Nunes learned her costly mistakes from that bout. I believe that the former two-division champion will adjust her fight plan accordingly to reclaim her title.

Several tweaks from her strategy in this match that we might see from Nunes are applying more pressure on Julianna, more patience in picking the right strikes and not emptying the tank early during the fight.