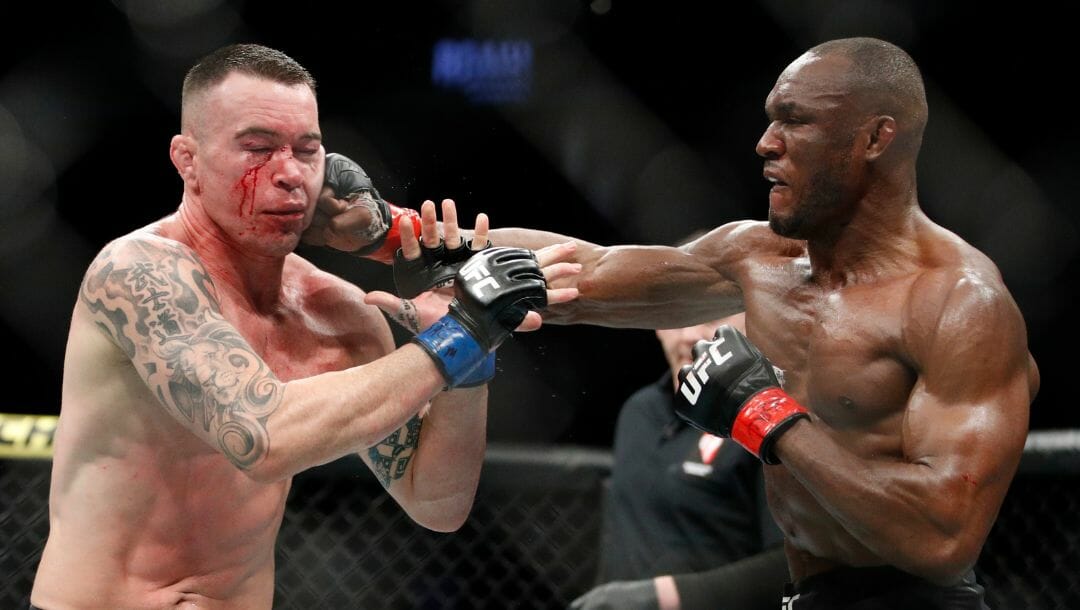 A familiar opponent awaits the reigning UFC Welterweight Champion and the number one-ranked pound-for-pound fighter Kamaru Usman (20-1) this weekend as he faces the number two challenger Leon Edwards (19-3) inside the Vivint Arena in Salt Lake City for the undisputed title.

The Salt Lake City showdown is upon us – #UFC278 fight week starts NOW!

This will be the sixth title defense for Usman, the UFC betting favorite at -400, and he is primed to further cement his place as one of the greatest fighters in MMA history with another victory. Meanwhile, Edwards is looking to defy the UFC odds (+310) stacked against him and wants revenge from their first meeting in December 2015, wherein he received a unanimous decision loss.

Kamaru Usman is not new to title rematches; this will be his third career title rematch. He is fresh off a unanimous decision victory over Colby Covington in November 2021 to put an end to the controversial late stoppage win he had during their first meeting in December 2019.

Usman’s first title rematch was against Jorge Masvidal in April 2021, and he scored an astounding second-round knockout to put away another rival. He previously faced Masvidal in July 2020 when the challenger stepped in as a late replacement opponent to save the main event of the fight card in Abu Dhabi.

Before scoring those two dominant wins over Covington and Masvidal, the ‘’Nigerian Nightmare’’ also fended off a challenge from his former training partner Gilbert Burns in February 2021 with a third-round TKO finish.

The world’s reigning number one pound-for-pound fighter became a world champion when he dethroned Tyron Woodley with a lopsided win during their title showdown in March 2019. His route to the UFC was via the Ultimate Fighter, where he secured a second-round submission finish over Hayder Hassan to crack a spot on the roster.

The UFC signed Leon Edwards in 2014 after he accumulated an impressive record of eight wins against one loss (a disqualification loss) outside of the promotion, thus becoming a title-holder in the British Association of Mixed Martial Arts. However, Edwards’ debut was foiled by Claudio Silva as he sustained a close split decision defeat.

But the UTC Birmingham representative immediately picked up two consecutive wins over Seth Baczynski (first-round knockout) and Pawel Pawlak (unanimous decision). His loss to Usman came in his fourth bout under the UFC in December 2015. But since then, he went on nine straight victories of his own.

His latest victory came at the expense of the famous and crowd favorite Nate Diaz in June 2021, where he weathered a late resurgence from him and cruised to the unanimous decision victory to finally earn his first title shot and a rematch against Kamaru Usman.

Usman vs. Edwards: Tale of the Tape and Fight Analysis

In this analysis, I will not use the first meeting to reference this rematch as both fighters have significantly improved since that first fight; instead, I will focus on their overall statistical data.

Let’s begin with their physical attributes. Both athletes have an almost identical physique, with Usman having a two-inch reach advantage and Edwards edging him with a two-inch leg reach.

The defending champion has the higher KO/TKO rate at 47% compared to the challenger’s 32%. However, in terms of submission finishes, Edwards has the higher percentage of 16% against Usman’s 5%.

Regarding significant strikes, Usman almost doubles Edwards’ output at 4.66 compared to 2.62 per minute, which converts to 52% and 49%, respectively. Concerning the strikes absorbed per minute, “Rocky” has a slight edge over the “Nigerian Nightmare” with only 2.15 against his 2.59, but surprisingly, the latter still has the higher defense rate of 58% against the former’s 55%.

Looking at their grappling numbers, Usman has the clear advantage in this department as he has an average of three takedowns per 15 minutes (against Edwards’ 1.48), an accuracy of 49% (against Edwards’ 35%), and an incredible 100% of takedown defense (against Edwards’ 70%). Leon Edwards, though, holds the higher average of submission per minute with 0.35, as Kamaru Usman only has 0.12.

Stylistically, they are pretty similar, where both fighters love to come forward and pressure their opponents. They also mix things with striking and grappling, making them well-rounded mixed martial artists. However, there is a significant discrepancy in terms of power as Usman possesses the heavier blows.

Since Trevor Wittman became Kamaru Usman’s head trainer, he maximized the powerful jabs formerly not utilized from the champion’s arsenal. It became one of his deadliest weapons and was vital in his last three title defenses.

This will also be his key to victory in this rematch against Edwards to keep him at bay throughout the match and potentially set up a combination to finish the fight.