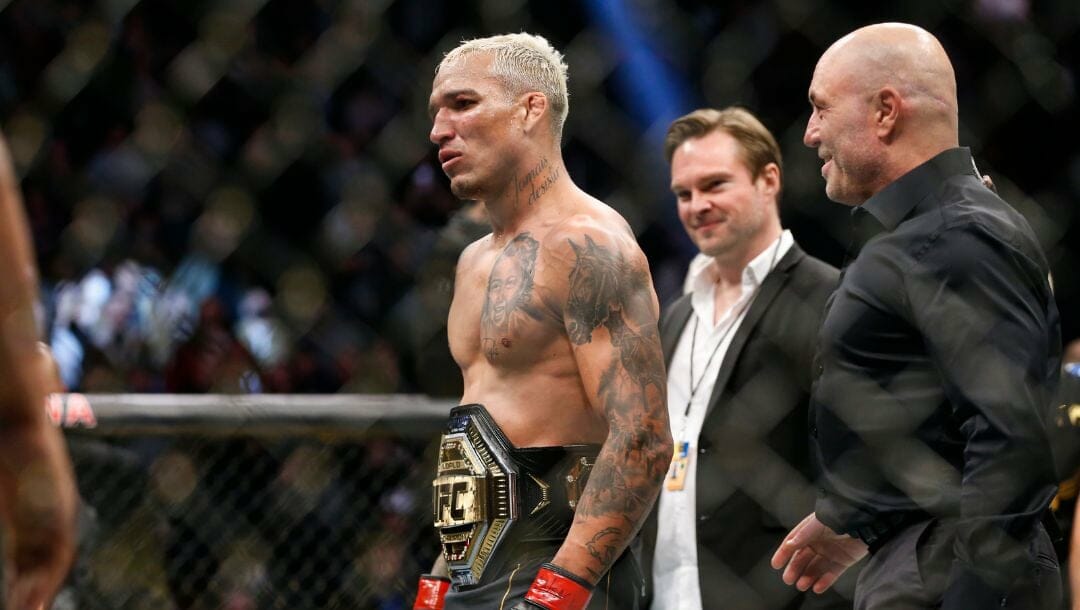 The massive showdown between two of the hottest streaking UFC lightweights will go down this weekend as number one-ranked Charles Oliveira (33-8) faces the fourth-best UFC lightweight, Islam Makhachev (22-1), for the undisputed 155-pound title inside the Etihad Arena in Yas Island, UAE.

Oliveira, despite his current 11-fight winning streak, is still the underdog in the UFC odds at +135, while his opponent Makhachev who has an almost similar number of consecutive victories, is the UFC betting favorite at -165. The Brazilian was stripped of his title in his previous fight against Justin Gaethje in May 2022 because he missed weight by half a pound.

Charles Oliveira, one of Brazil’s finest MMA fighters today, is a UFC veteran who has been with the promotion since 2010. He earned a spot on the roster by winning 12 fights, including 11 finishes outside other MMA organizations. He made a successful debut by submitting Darren Elkins via armbar, just 41 seconds in the opening round in August 2010.

“Do Bronx” claimed another submission victory via rear-naked choke against Efrain Escudero in September 2010 to tally his second UFC win. But from that point, Oliveira competed in 17 UFC fights and saw mixed results: eight wins (including seven), eight losses and one no-contest.

After that loss to Felder in December 2017, Oliveira finally went on an unbeaten run, and in the process, he won the UFC Lightweight title. This winning stretch began in June 2018 when he submitted Clay Guida via a rear-naked choke in the first round of their bout. Then followed it up with six more finishes.

Oliveira submitted Christos Giagos (in September 2018), Jim Miller (in December 2018) and David Teymur (in February 2019). He also showed that he is not only a submission specialist by scoring TKO/KO wins over Nik Lentz (in May 2019) and Jared Gordon (in November 2019). The Chute Boxe representative extended his streak by beating Kevin Lee (via submission in March 2020) and Tony Ferguson (via unanimous decision in December 2020).

This stunning eight-fight consecutive win has opened up an opportunity for a title as he was pitted against Michael Chandler in May 2021 for the undisputed lightweight championship. Oliveira came back from a first-round adversary to stop Chandler in the opening stages of the second round to claim the UFC Lightweight Title.

The Brazilian MMA superstar also succeeded in his first title defense against Dustin Poirier as he submitted him in the third round of the showdown. With this win, Oliveira became the record-holder for the most submissions in UFC history with 16. His supposed second title defense in May 2022 against Justin Gaethje was jeopardized due to a missed weight of half a pound.

Because of that, he was stripped of the title and was disqualified from winning it against Gaethje. This did not deter Oliveira as he stopped the “Highlight” via rear-naked choke in the first round to gain the automatic berth for another title fight. He is currently the number one-ranked 155-pounder in the UFC.

Islam Makhachev is touted to be Khabib Nurmagomedov’s successor as the next UFC Lightweight Champion, as the latter ended his MMA career with a perfect record of 29 wins and no losses. Like Khabib, Makhachev had a similar route to the Las Vegas-based promotion when he dominated the Russian MMA circuit by collecting 11 wins, including seven finishes.

The 31-year-old Dagestani had a dream start to his UFC career with a second-round rear-naked choke of Leo Kuntz in his promotional debut in May 2015. However, Makhachev suffered a loss to Adriano Martins during his second UFC fight in October 2015 when he was TKO’ed in the first round after catching a powerful right-hand counter punch that floored him.

Makhachev used that setback to rack up the wins as he took a revenge tour to pick up ten straight wins. This streak began in September 2016 when he dominated Chirs Wade for a unanimous decision victory. It was the same fate for Nik Lentz, who also received a unanimous decision loss from Makhachev in February 2017.

The American Kickboxing Academy athlete collected two finishes from Gleison Tibau and Kajan Johnson, whom he knocked out and submitted in January 2018 and July 2018, respectively. Makhachev extended his consecutive wins to eight with unanimous decision victories over Arman Tsarukyan (in April 2019) and Davi Ramos (in September 2019) and submission wins against Drew Dober (in March 2021) and Thiago Moises (in July 2021).

Islam Makhachev’s most impressive triumph by far in his career came at the expense of Dan Hooker in October 2021 when he made him tap with a kimura submission. The Russian’s latest casualty is Bobby Green, a late replacement fighter in February after Beneil Dariush withdrew from the fight due to an injury.

Makhachev mauled Green in the fight and quickly added another TKO win under his name. This victory has granted Islam a title shot after numerous reports from the media that several fighters are refusing to fight him. The win over Green also increased his winning streak to 10 and landed him in the fourth spot of the division’s ranking.

Oliveira vs. Makhachev: Tale of the Tape and Fight Analysis

The physical features between the two fighters favor Charles Oliveira, as he will enjoy a three-and-a-half-inch reach advantage and a half-inch leg reach advantage over Islam Makhachev. Both are standing at 5-foot-10 and are expected to add a significant amount of weight on fight night.

In terms of professional record, the Russian clearly has the edge because of his better record of 21-1, while the Brazilian has 33-8 under his name. But despite the finer record, Oliveira has a better stoppage rate against Makhachev as only nine percent of his wins are from decisions (38% for Makhachev), 27% are from TKO/KO, and 64% are in the form of submissions (while Makhachev has 14% and 48%). Makhachev has more average fight time of 9:11 compared to Oliveira’s 6:55.

Looking at the significant strikes, “Do Bronx” clearly has the upper hand with 3.53 strikes landed per minute, which translates to 53% (2.27 for Makhachev, equal to 57%), but the Dagestani has a better defense of 68% and only absorbs 0.84 strikes per minute, unlike Oliveira’s 3.18 strikes absorbed per minute and which only accounts to 52%.

Stylistically, this will be a high-level grappling match where the Brazilian Jiu-Jitsu background of Charles Oliveira will clash with Islam Makhachev’s combat sambo style. I think this top-flight technique between the two will only cancel each other out because both fighters know that submission threats should be constant throughout the bout, especially when it goes to the ground.

I believe that this will be a striking match and see them exchange more on their feet. If this is the case, it will be a long night for Islam Makhachev because it will be hard for him to contain Charles Oliveira’s power. The enormous improvement of Oliveira’s striking will be on full display. This is also why I think “Do Bronx’s” status as the underdog in the betting odds is absurd.