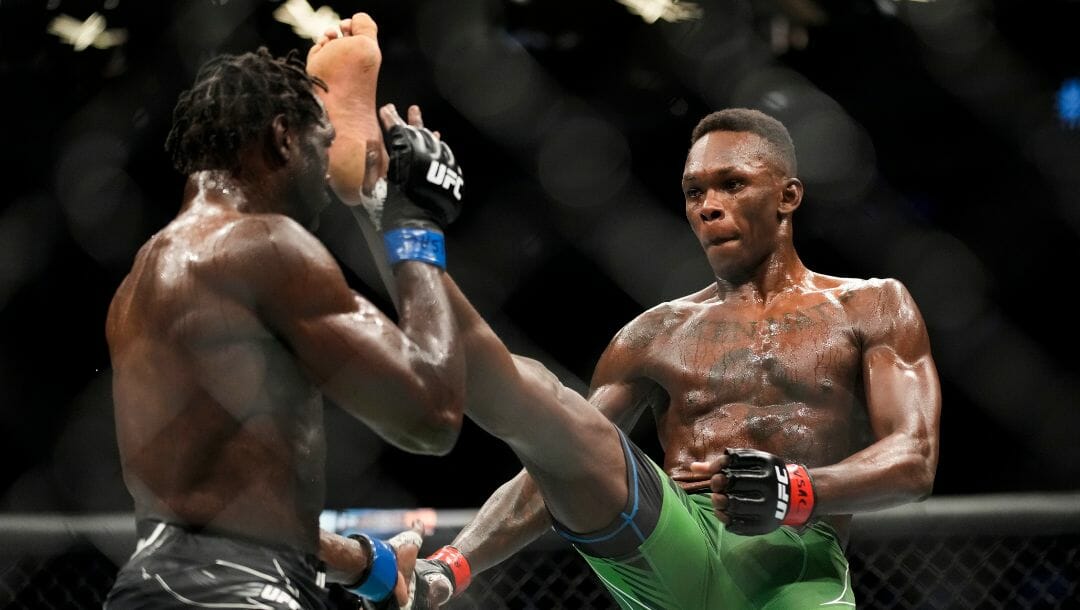 A big UFC card will take place at Madison Square Garden as the latest title defense of reigning UFC Middleweight Champion Israel Adesanya (23-1) happens in the Big Apple. He will face a familiar opponent, Alex Pereira (6-1), who seeks to end his immaculate run in the 185-pound division.

This will be Adesanya’s sixth title defense, and he is the favorite in the UFC odds at -175, while Pereira, the UFC betting underdog at +145, will be appearing in his fourth promotional bout after collecting three straight wins. These two have fought during their kickboxing days, and the Brazilian has won two of their previous meetings, one via decision and one via knockout.

Israel Adesanya transitioned to MMA from kickboxing in March 2012 and quickly accumulated 11 wins (all by stoppage) to catch the attention of the UFC where he ultimately signed in 2018. Adesanya made a successful Octagon debut with a second-round TKO finish against Rob Wilkinson in February 2018. He immediately followed it up with victories over Marvin Vettori (split decision win in April 2018) and Brad Tavares (unanimous decision win in July 2018) to climb up the rankings.

With these impressive piles of wins, the “Last Stylebender” started his path to the championship by stopping Derek Brunson (first-round TKO in November 2018) and an all-time classic match against the great Anderson Silva (unanimous decision victory in February 2019). Adesanya’s first title opportunity came in April 2019 when he was pitted against Kelvin Gastelum for the interim UFC middleweight title. It was another entertaining back-and-forth fight, but ultimately, he came away with the unanimous decision win.

After winning the interim title over Gastelum, the middleweight unification bout followed through, where he faced Robert Whittaker for the undisputed title. The City Kickboxing athlete made it look easy by knocking out the former champion in the second round to begin his title reign. Less than a year into his middleweight supremacy, he was able to notch victories over Yoel Romero (unanimous decision in March 2020) and Paulo Costa (second-round TKO in September 2020).

The Nigerian-New Zealander attempted to be a UFC double-weight champion in March 2021 when he challenged Jan Blachowicz for the UFC Light Heavyweight Title, but he unanimously defeated him. After this short stint in the 205-pound division, he returned to his natural weight to fend off challengers and collect more title defenses. Adesanya warded off two revenge-seeking oppositions in his middleweight homecoming.

In June 2021, Adesanya unanimously defeated Marvin Vettori in their second meeting and reasserted his mastery over him. Eight months later, in February 2022, he would also repeat against Robert Whittaker in their title rematch. The 33-year-old champion’s latest casualty was Jared Cannonier, who he also outlasted via unanimous decision in July 2022 to notch his 12th UFC win and extend his title defenses to five.

Alex Pereira, a former kickboxer, matches Israel Adesanya’s meteoric rise in UFC’s middleweight division. The Brazilian is known as one of the best kickboxers in history, as he became a multiple-time GLORY Kickboxing champion and a two-division champion. Although Pereira suffered a loss in his MMA debut in 2015 against Quemuel Ottoni via rear-naked choke, he went on to collect six straight wins.

Pereira appeared in three more MMA fights outside the UFC and knocked out Marcelo Cruz in the first round in January 2016, TKO’ed Marcus Vinicius Fialho da Silveira in May 2016, and another first-round knockout against Thomas Powell in November 2020. Shortly after, he was added by the UFC to beef up their 185-pound division. When the Brazilian entered the UFC, he was known to be the fighter who “knocked out Israel Adesanya,” but this instantly changed.

“Poatan” scored a highlight-reel knockout debut victory over Andreas Michailidis in November 2021 as he engineered a flying knee just 18 seconds into the second round. He followed up this impressive victory with a unanimous decision win over Brazilian compatriot Bruno Silva in March 2022 to improve his record to five wins and one loss. Pereira endured big moments from Silva and two takedowns in this fight.

The 35-year-old secured his maiden UFC title shot in July 2022. He put Sean Strickland, one of the top-ranked contenders in the division, on skates through his signature left hook punch that was followed up with a nasty straight right-hand to close the match. This massive win by Pereira propelled him in the rankings, where he is now the current number four contender.

Adesanya vs. Pereira: Tale of the Tape and Fight Analysis

Adesanya and Pereira’s physical gifts are almost virtually identical as the former only has a one-inch reach advantage ( Adesanya has 80 inches of reach compared to  Pereira’s 79 inches) and half-an-inch of leg reach edge (Adesanya has 44.5 inches while Pereira has 44 inches). Both middleweights stand 6-foot-4. Looking at their MMA record, they also have one loss each.

This will be the third time Adesanya and Pereira will be facing each other, as their first two meetings happened in a kickboxing setting, so I will be throwing that win out of the window and nullifying those wins by Pereira (one decision win and one knockout win) because MMA has a different set of rules. It’s also been years since they fought each other. One thing fans should expect, though, is that this will be a striking extravaganza.

Stylistically, both will display their kickboxing backgrounds, allowing them to succeed in their transition to MMA. Of course, this style comes with extraordinary power, which explains Adesanya’s 68% finishing rate and Pereira’s 83% finishing rate. The champion, who obviously has more fights inside the Octagon, also holds the higher wins via decision at 32% against the challenger’s 17%.

One good evidence that this fight will be a barn-burner is the significant strikes department, where the No. 4-ranked contender holds an edge over the champion on offense. The Brazilian has the higher strikes landed per minute at 6.29 against the Nigerian-New Zealander’s 3.92, equivalent to 60% and 49%, respectively. However, in terms of defense, Adesanya has better stats at 2.67 strikes absorbed per minute (equal to 59%), while Pereira has 3.36 (equivalent to 58%).

Another proof that this UFC Middleweight Title Match will be on the feet is the zero takedown average per 15 minutes and zero takedown accuracy of both fighters. As mentioned earlier, this latest meeting between Adesanya and Pereira will be in an MMA match, so I will give the advantage to the ‘’Last Stylebender’’ because of his wealth of experience over ‘’Poatan,’’ who will be seeing action for only his seventh professional MMA fight.

This experience by Adesanya includes championship-level ordeals against the top fighters in the UFC roster. However, Pereira will have the edge in terms of power because he has the ability to put anyone to sleep with just one hit, much like he did to Izzy in their second match. I think Adesanya will be fighting smart because he knows the force that the Brazilian contender possesses. He will be utilizing the clinch position and grabbing Pereira to neutralize his power and score points off it.

I believe that Adesanya we saw in the Paulo Costa fight will come out on Saturday and that he will pick apart Pereira to avenge his first two losses from him and continue the dominant run in the 185-pound division to surpass the record of Anderson Silva eventually, thus putting him in the conversation to be the greatest middleweight fighter in UFC history.