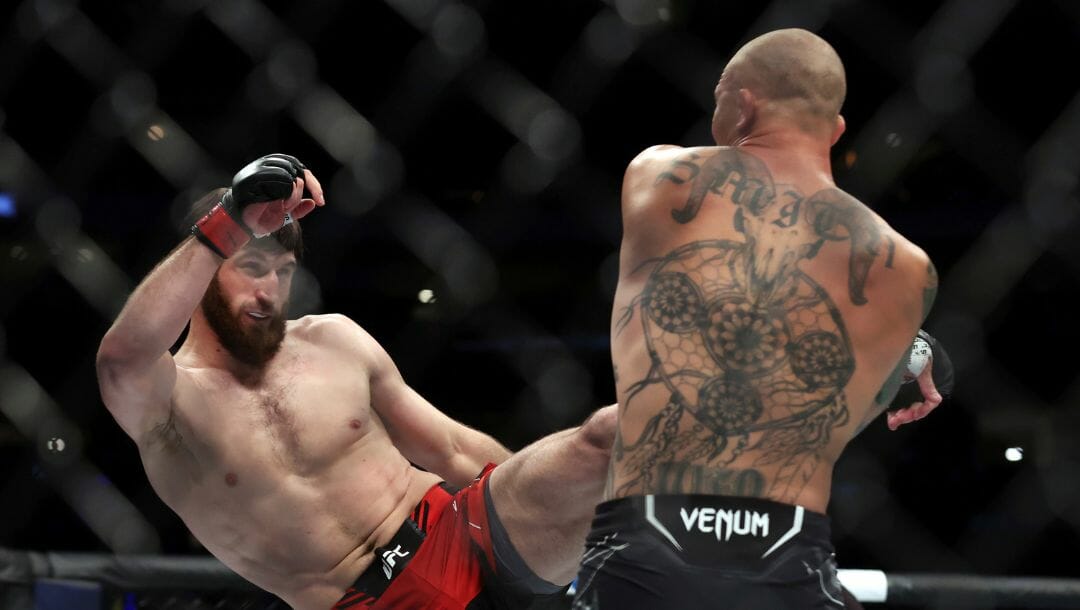 After Jiri Prochazka relinquished his title due to an injury ahead of UFC 282 and the refusal of Glover Teixeira to fight another opponent, the UFC decided to book a title fight between the number two contender Jan Blachowicz (29-9) and number three challenger Magomed Ankalaev (18-1) for the vacant 205-pound title inside the T-Mobile Arena in Las Vegas.

Ankalaev, who is on a hot streak now of nine straight wins, is the clear favorite in the UFC odds at -275, while Blachowicz, the former champion, will be the underdog in UFC betting at +210. This will be Blachowicz’s second UFC vacant title fight after he defeated Dominick Reyes in September 2020, while Ankalaev will appear in his first title match.

Jan Blachowicz has been a mainstay in the UFC’s light heavyweight division since making his promotional debut in October 2014, where he TKO’ed Ilir Latifi in the opening round of their match. Before making it to the Las Vegas-based MMA organization, Blachowicz was a force in the European MMA circuits and accumulated a 17-3 record. He even won the KSW Light Heavyweight Title before his UFC stint.

Despite the dream start due to his TKO victory, the Polish had a rough five-fight stretch where he only won one and dropped the other four. Jimi Manuwa and Corey Anderson unanimously beat Blachowicz in April and September 2015, respectively. He was able to bounce back with a unanimous decision win over Igor Pokrajac in April 2016 to save his contract with the promotion. But, he was immediately sent back to the losing end with another back-to-back setback.

Alexander Gustafsson and Patrick Cummins gave Blachowicz two more losses in his record with decision victories in September 2016 and April 2017. This prompted the Cieszyn, Poland native, to go on a streak and slowly climb up the rankings. He started his revenge tour with a second-round rear-naked choke submission win over Devin Clark in October 2017 before handily beating Jared Cannonier two months later.

Blachowicz continued his momentum-building streak with a vengeance win over Jimi Manuwa in their March 2018 rematch via unanimous decision. Six months later, he submitted Nikita Krylov in the second round with an arm-triangle choke in September 2018 to extend his successive wins to four. This hot streak by Blachowicz was snapped by Thiago Santos, who scored a third-round TKO win in February 2019 to halt his rise in the title picture.

The setback from Santos didn’t deter Blachowicz from reaching his ultimate goal of being a champion as he took down Luke Rockhold (in July 2019 with a second-round knockout), Jacare Souza (in November 2019 with a unanimous decision win) and Corey Anderson (in February 2020 with a first-round knockout). Because of this impressive streak, Blachwowicz was supposed to be the next challenger for Jon Jones’ title in the 205-pound division, but Jones relinquished the belt after his last title defense in March 2020 to move up in the heavyweight division.

UFC set up a vacant title clash between Jan Blachowicz and former title challenger Dominick Reyes in September 2020, where Blachowicz realized his dream of becoming a UFC champion by stopping Reyes in the second round of their bout via TKO. Six months later, the Polish MMA superstar instantly defended his title over Israel Adesanya, who moved up in weight to challenge him.

But Blachowicz spoiled Adesanya’s attempt to be a double-weight champion as he dominated the middleweight title holder en route to a unanimous decision win. The second title defense of Blachowicz wasn’t successful as the first one because a surging Glover Teixeira submitted him in the second round of their October 2021 showdown, thus losing the belt in the process.

Jan Blachowicz’s road back to title contention went back in the right direction after he took care of business against another top contender, Aleksandar Rakic, in his previous match in May 2022 after Rakic injured his knee and was unable to continue. The 39-year-old hopes to regain the coveted championship belt he once held and return as the division’s undisputed king.

After a successful stint in the Russian MMA circuits, particularly in WFCA, where he amassed an immaculate record of 9-0, Magomed Ankalaev finally caught the attention of the UFC and offered him a contract in 2018. Ankalaev made his UFC debut in March 2018 against Paul Craig. The Russian dominated the fight with his striking and wrestling, thus cruising his way to victory. However, he got caught by Craig in the dying seconds of the fight with a triangle choke and got submitted.

It was Ankalaev’s first taste of defeat in his MMA career and was an unfortunate ending in his maiden UFC bout. But the fighter from Makhachkala, Dagestan, Russia, proved that he was the real deal by winning all his next nine fights inside the Octagon. First, he obliterated Marcin Prachnio in September 2018 with a first-round TKO finish. Then, a unanimous decision win over Klidson Abreu in February 2019 and the third-round knockout of Dalcha Lungiambula in November 2019 shortly followed.

After three quick wins, Ankalaev created a little rivalry with Ion Cutelaba because of a controversial first-round TKO stoppage incident in their first match in February 2020. Cutelaba claimed that he was still able to fight despite being wobbly legs after the referee stepped in to stop the match. Due to this, the UFC mandated an immediate rematch between the two which happened in October 2020.

In the rematch, the Russian wrecking machine made sure to leave no doubt on who’s the better fighter between him and Cutelaba as he knocked him out in the first round. After closing this chapter with the Moldovan, Ankalaev continued his trajectory toward a title opportunity by going undefeated in four more fights. He picked up unanimous decision wins over Nikita Krylov (in February 2021), Volkan Oezdemir (in October 2021) and Thiago Santos (in March 2022).

The victory that pushed Ankalaev to be in the third spot in the 205-pound weight class and the backup for the title bout is his May 2022 second-round TKO of Anthony Smith. It was his ninth-straight win in the UFC and 18th overall. He hopes to continue his streak against Jan Blachowicz and eventually realize his dream of becoming a UFC champion.

Blachowicz vs. Ankalaev: Tale of the Tape and Fight Analysis

On paper, Magomed Ankalaev will carry the height and leg reach advantages as he has a one-inch height edge at 6-foot-3 and a length of 46 inches leg reach against Jan Blachowicz’s 6-foot-2 frame and 44 inches leg reach. The only upper hand the Polish will have over the Russian is the reach, as Blachowicz will enjoy a three-inch advantage at 78 inches compared to Ankalaev’s 75 inches arm span.

Stylistically, Blachowicz is the more well-rounded fighter among the two because of how balanced his method of victories is in his record compared to Ankalaev. The 39-year-old Polish star has a 31% TKO/KO rate, a 31% submission finish, and 38% decision victories, while the 30-year-old Russian possesses a high ratio of 56% of TKO/KOs and 44% of decision wins. This number accounts for a fight time of 12:20 for Blachowicz and 11:10 for Ankalaev.

In the striking department, Ankalaev has the better statistical numbers on both the offensive end and defensive end, landing 3.64 strikes per minute, which converts to 54% and 0.81 knockdown average per 15 minutes, while Blachowicz has a decent number of 3.55 strikes landed per minute that is equal to 49% and 0.41 knockdown per 15 minutes. The number three-ranked contender also absorbs the lesser strikes at only 2.14 per minute (60% defense rate) compared to the number two-ranked challenger, who receives 2.77 (54% defense rate).

If Ankalaev has the lead in the stand-up, Blachowicz will enjoy his advantages in the grappling department with his 1.08 takedown average (compared to Ankalaev’s 0.94), 53% takedown accuracy (33% for Ankalaev) and 0.27 submission average per 15 minutes (against Ankalaev’s 0). The only edge for Ankalaev is his takedown defense, which is high at 86% against Blachowicz’s 66%.

This light heavyweight title showdown between Blachowicz and Ankalaev will be an entertaining bout because of the power these two contenders boast. They can present a high-level and technical exchange on the feet, fight for grappling positions, and scramble down the mat. Regardless of where the bout will go, it has all the makings to be an all-time classic because of the fighting styles of both athletes.

Speaking of fighting styles, Magomed Ankalaev’s pressure and power are going to be a problem for Jan Blachowicz during the fight because he will force the former champion to be a counterpuncher, thus making him think about shooting for takedowns to neutralize any threat of big strikes from the Russian knockout specialist. However, Ankalaev’s takedown defense will be enough to stop any takedown attempts from Blachowicz.