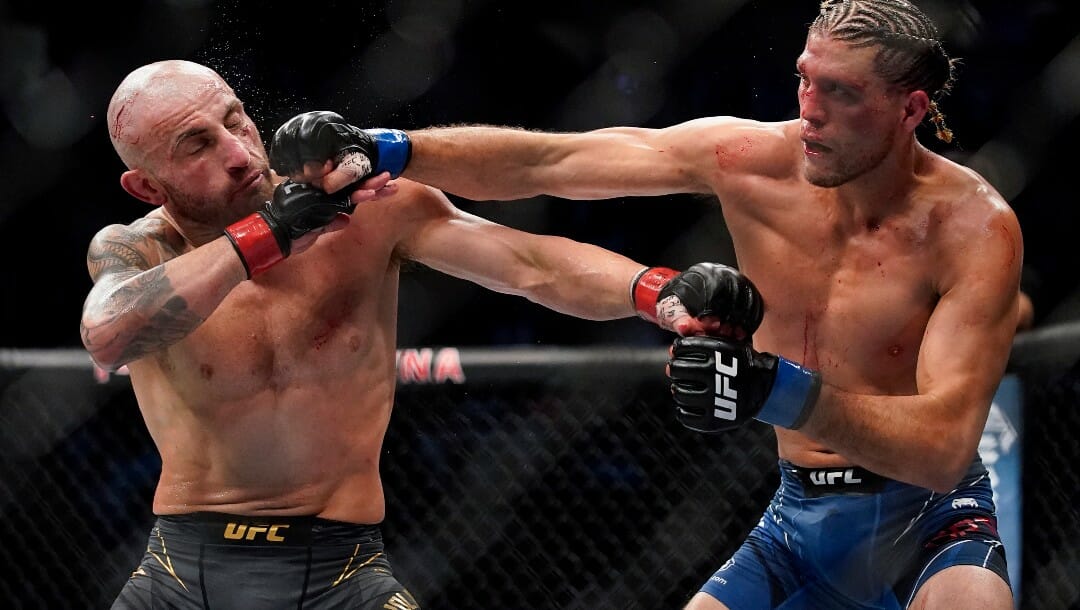 A top-flight featherweight clash will be witnessed this weekend as number two contender Brian Ortega (15-2) goes toe-to-toe with number three-ranked Yair Rodriguez (14-3) in the main event of UFC Fight Night 59, which goes down inside the UBS Arena in Elmont, U.S.A.

The two athletes are coming off losses in their last fight, where both were the underdog in the UFC odds against Alexander Volkanovski and Max Holloway. This time, Brian Ortega is the favorite in the MMA odds to pick up the victory over Yair Rodriguez.

Brian Ortega is fresh from a featherweight title loss courtesy of Alexander Volkanovski, who handed him a unanimous decision defeat in an unforgettable championship match in September 2021. Before that setback, ”T-City” had a masterful performance against Chan Sung Jung in October 2020, on his way to a unanimous decision win to earn another crack at the title.

The Brazilian Jiu-Jitsu practitioner had his first chance for UFC gold in December 2018 but was denied by Max Holloway through a fourth-round doctor stoppage. Ortega made his UFC debut in July 2014 against Mike de la Torre, but that fight was ruled a no contest.

After that unfortunate result, Brian Ortega went on to finish all of his next six opponents, scoring a TKO win over Thiago Tavares, a triangle choke finish of Diego Brandao, a knockout victory over Clay Guida, guillotine choke wins over Renato Moicano and Cub Swanson and a knockout win over Frankie Edgar.

The UFC route for Mexico’s Yair Rodriguez was via the Ultimate Fighter, as he knocked out Rodolfo Rubio in the semifinals before unanimously beating Leonardo Morales to claim the Latin America Featherweight Title and earn himself a spot on the UFC roster.

Rodriguez received his first UFC loss from Frankie Edgar in May 2017 via a doctor’s stoppage to delay his rise in the featherweight division. But he immediately made everyone remember his name in his fight with Chan Sung Jung when he produced a last-second elbow knockout to obtain another win.

He followed that with a unanimous decision win over Jeremy Stephens in October 2019 before eventually falling to Max Holloway in his last bout to absorb his second UFC loss.

Ortega vs. Rodriguez: Tale of the Tape and Fight Analysis

Yair Rodriguez will enjoy a three-inch height advantage and a two-inch reach edge over Brian Ortega. Both fighters are known finishers, but Ortega has the higher rate of 67% (most of which are via submission) against Rodriguez’s 54% (most are KO/TKOs). ”El Pantera” is also two years younger than ”T-City”.

Stylistically, both men will have the upper hand against each other, depending on where the match occurs. If it is going to be a striking affair, Rodriguez will have the advantage due to his taekwondo and boxing background, which allowed him to land 4.65% of his significant strikes per minute (against Ortega’s 4.15%). Additionally, the Mexican has a 45% striking accuracy compared to his opponent’s 38%.

On the other hand, if this fight goes down to the mat, then Rodriguez will be on Brian Ortega’s territory, where he finished seven of his opponents via submission thanks to his Brazilian Jiu-Jitsu background. The former title challenger holds a 1.2% submission average per 15 minutes with a takedown accuracy of 24%.

This lethal submission ability is the primary reason why Brian Ortega is the favorite to be victorious over Yair Rodriguez going into the fight. Also, Ortega’s recent performances against Chan Sung Jung and Alexander Volkanovski, where he showed a sharper and much improved stand-up game, is another reason why oddsmakers are leaning to his side.