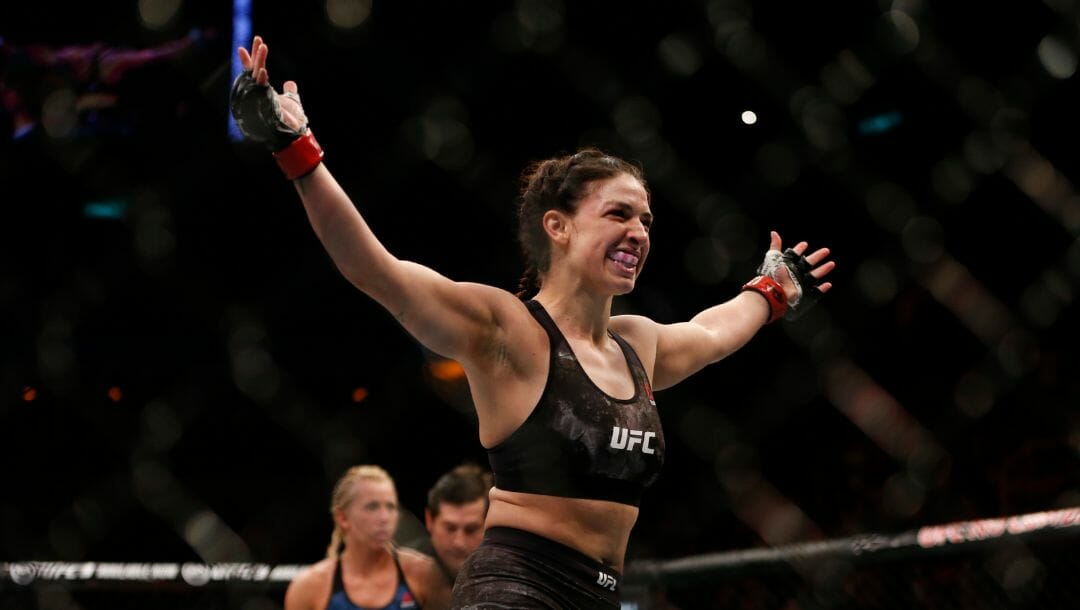 Due to two consecutive losses, Xiaonan Yan will come in as the UFC betting underdog at +190, while Mackenzie Dern will be the favorite at -250 because she won her previous fight in April.

Mackenzie Dern began her professional MMA career in 2016 and quickly racked up five wins, including three submission wins in 17 months. This prompted the UFC to sign her in 2018, and Ashley Yoder was her debut opponent.

Yoder immediately tested Dern as she squeezed out a close split decision victory. In her next UFC fight, she submitted Amanda Cooper via rear-naked choke to put the whole division on notice. But Dern received her first career defeat at the hands of Amanda Ribas in her third UFC fight.

Ribas unanimously beat Dern in October 2019 to remove the 0 in her record. After this maiden setback, the RVCA representative went on a revenge tour and picked up four straight wins, beginning with a kneebar submission of Hannah Cifers in May 2020.

Dern scored another submission victory over Randa Markos in September 2020 before dominating the scorecards against Virna Jandiroba in December 2020 to chalk up a unanimous decision win.

The Brazilian returned to action in April 2021 to submit Nina Nunes and officially obtain her fourth-consecutive triumph. This four-fight win streak gained Dern her first-ever headliner against Marina Rodriguez in September 2021, but unfortunately, she was on the other side of a convincing unanimous decision loss.

Mackenzie Dern immediately returned to winning ways by outpointing Tecia Torres in April 2022 and landed the number five spot on the division’s rankings.

Xiaonan Yan started her professional MMA career in 2009 at the young age of 18. After amassing an impressive record of eight wins and one loss, the UFC gave her a contract in 2018 to beef up the 115-pound division.

The Chinese star made her promotional debut against Viviane Pereira in June 2018 and successfully got the win with a unanimous decision nod from the judges. Shortly after, she added Syuri Kondo to her victim list with another unanimous decision win in November 2018.

Yan got her first real test inside the Octagon when she was pitted against Angela Hill in June 2019, and she was able to get past her with a unanimous decision victory. The Team Alpha Male athlete seized two more wins and defeated Karolina Kowalkiewicz in February 2020 and Claudia Gadelha in November 2018.

Because of this undefeated campaign under the Las Vegas-based promotion, Xiaonan Yan earned the biggest fight of her career by far with a match with former champion Carla Esparza in May 2021. Unfortunately, Yan was sent back crashing back to earth as Esparza TKO’ed her in two rounds.

Yan almost bounced back from that devastating loss to Esparza in March 2022 but fell short of a win after Marina Rodriguez eked out a razor-thin split decision defeat.

Dern vs. Yan: Tale of the Tape and Fight Analysis

The physical features of Mackenzie Dern and Xiaonan Yan were similar on paper, with the Chinese star standing at 5-foot-5 and the Brazilian at 5-foot-4. Their reach was equal at 63 inches, but Dern has a slight leg reach edge of a half-inch as she has 37.5 inches compared to Yan’s 37 inches.

Stylistically, it will be another classic match-up of a striker and a grappler. Yan will look to put Dern out with her relentless striking, while Dern will want to add another submission highlight under her resume.

This stylistic difference is evident in their record as Dern has 11% of her wins coming off submissions and Yan winning 38% of her bouts via TKO/KO method. Both women are also known to have outstanding durability, which allowed them to win by way of decisions, with Dern having 89% and Yan having 62% of her own.

The same story goes to the defensive end in the stand-up game, where Yan only absorbs 3.77 strikes per minute, whereas Dern receives more strikes at 4.35, which reflects 62% and 54% of striking defense, respectively.

It will be a good fight for both strawweight contenders, but I see this one going to Mackenzie Dern’s favor because I believe that she will fully utilize her complete Brazilian Jiu-Jitsu skills to neutralize the striking of her Chinese foe.

Additionally, the match will not see the judges’ scorecards because it will be a submission victory for the Brazilian star.