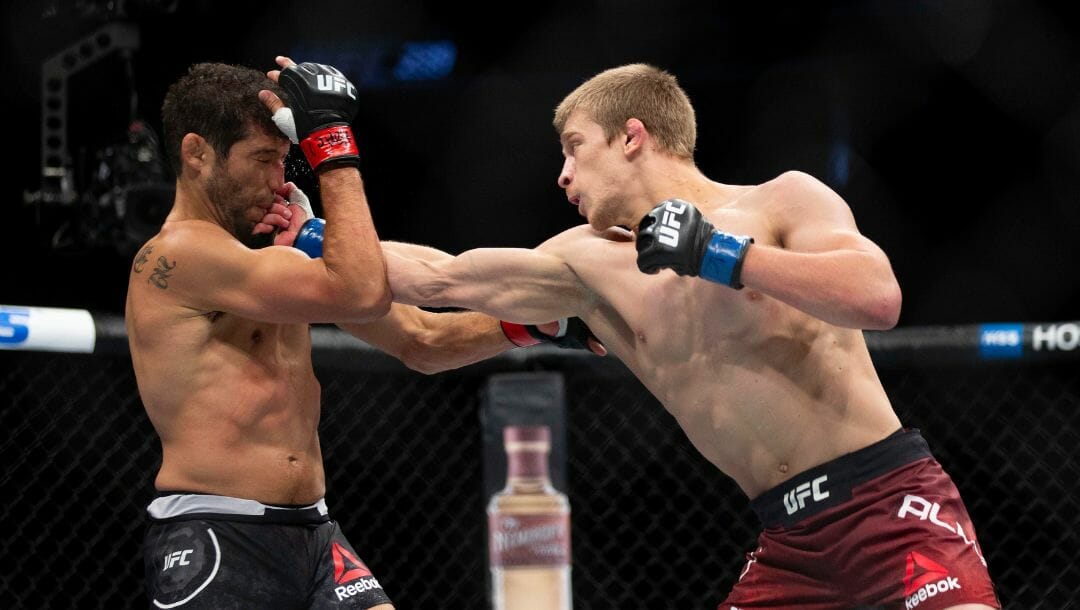 MMA action shifts back inside the UFC Apex in Las Vegas this weekend as a top featherweight bout will headline the main event. Number five featherweight challenger Calvin Kattar (23-6) meets the number six-ranked contender Arnold Allen (18-1) for the chance to improve their UFC odds in earning a title shot against the reigning champion Alexander Volkanovski.

Despite losing his previous fight, Kattar is still the slight favorite in the MMA odds at -105, while Allen is the tiniest of underdogs at -115, even with his 11-fight winning streak dating back to 2014 before he signed with the UFC.

Calvin Kattar began his professional MMA career in 2007, where he competed in various organizations and collected a 16-2 record in his first 18 matches. This impressive record allowed him to sign with the UFC in 2017. He debuted against Andre Fili in July 2017 and scored a unanimous decision victory. Six months later, Kattar stopped Shane Burgos in the third round to ride a mini-run early in his UFC career.

But this winning streak was halted by Renato Moicano when he defeated Kattar via decision to give him his first promotional loss in April 2018. The Methuen, Massachusetts native quickly bounced back by scoring back-to-back first-round finishes of Chris Fishgold (in October 2018) and Ricardo Lamas (June 2019). Because of this, Kattar earned his maiden main event feature when he was pitted against Zabit Magomedsharipov in November 2019.

However, he was handily beaten by the Russian through a unanimous decision. It prompted the “Boston Finisher” to rack up two successive wins against Jeremy Stephens in May 2020 (via second-round knockout) and Dan Ige in July 2020 (via unanimous decision). These impressive wins granted Kattar the biggest fight of his career with former featherweight champion Max Holloway.

The “Blessed Express” was too much to handle for Kattar as he was on the receiving end of a spectacular record set by Holloway for the most significant strikes landed in a fight during their main event headliner in January 2021. This loss did not deter the New England Cartel representative because he rebounded immediately with a masterful win over Giga Chikadze in January 2022.

Calvin Kattar’s latest outing came against Josh Emmett in his fifth main event bout in June 2022, where he received a debatable and close split decision loss. It was his fourth UFC setback in 11 fights. This upcoming match with Allen will see Kattar in his sixth main event feature, and he looks to use this win as a jumping board to inch him closer to a title shot.

Arnold Allen made his MMA debut in 2012 and quickly competed in ten fights in two years. In those ten bouts from different promotions, Allen won nine, including seven finishes and only suffered one defeat. His incredible record has caught the attention of the UFC, and he was offered a contract in 2015. The 28-year-old had a dream start to his UFC run with a third-round guillotine choke of Alan Omer in June 2015.

The fighter from Felixstowe, Suffolk, bagged three more victories over Yaotzin Meza in February 2016 via unanimous decision, Makwan Amirkhani in March 2017 via split decision and Mads Burnell in May 2018 via third-round guillotine choke to remain undefeated under the Las Vegas-based promotion. After only appearing in four UFC fights in his first three years, Allen became more active inside the Octagon in 2019, where he fought two times.

“Almighty” unanimously beat Jordan Rinaldi in March 2019 and Gilbert Melendez in July 2019 before picking two more decision victories over Nik Lentz in March 2019 and Sodiq Yusuff in April 2021 to extend his undefeated run under the UFC to eight. Due to this immaculate run, Allen received the biggest fight of his career by far as he was matched with top contender Dan Hooker in March 2022.

Allen maximized the opportunity by crudely defeating the Aussie in his 145-pound return with a first-round TKO stoppage in their high-profile match this past March inside the O2 Arena in London, England. This career-defining win not only expanded Allen’s successive victories to 11 but also propelled him to the number six spot in the featherweight division, thus solidifying his status as one of the rising stars in the weight class.

Kattar vs. Allen: Tale of the Tape and Fight Analysis

The physical frame of this featherweight showdown will be in Calvin Kattar’s favor as he will be enjoying a three-inch height advantage over Arnold Allen as he stands at 5-foot-11, while the Englishman is listed at 5-foot-8. The American will also enjoy a two-inch reach advantage, and an inch of leg reach edge, which can be maximized on the exchanges on the feet.

In terms of significant strikes, Kattar lands more strikes at 5.19 per minute compared to Allen’s 3.31; however, the latter has a better percentage of 42%, while the former converts it to 39%. Looking at the defensive end, the number six-ranked challenger has a better rate of absorbing strikes with only 2.22 per minute (which accounts for 66%) and the number five contender receives 7.15 (which is equal to 54%).

This fight between Calvin Kattar and Arnold Allen will be a banger as both athletes have similar fighting styles of being a striker. Expect Kattar to use every ounce of experience against Allen, while Allen will use his youth advantage to take out Kattar. Stylistically, this will be a fun match to watch. However, I look forward to seeing Allen take this match on the ground.

Although he can opt to stand and trade with Kattar, the 28-year-old could use his grappling superiority to possibly submit his opponent and take out the threat that the 34-year-old veteran can bring with his various strikes. Allen should exploit this area, especially since the veteran was once defeated via submission in his career.