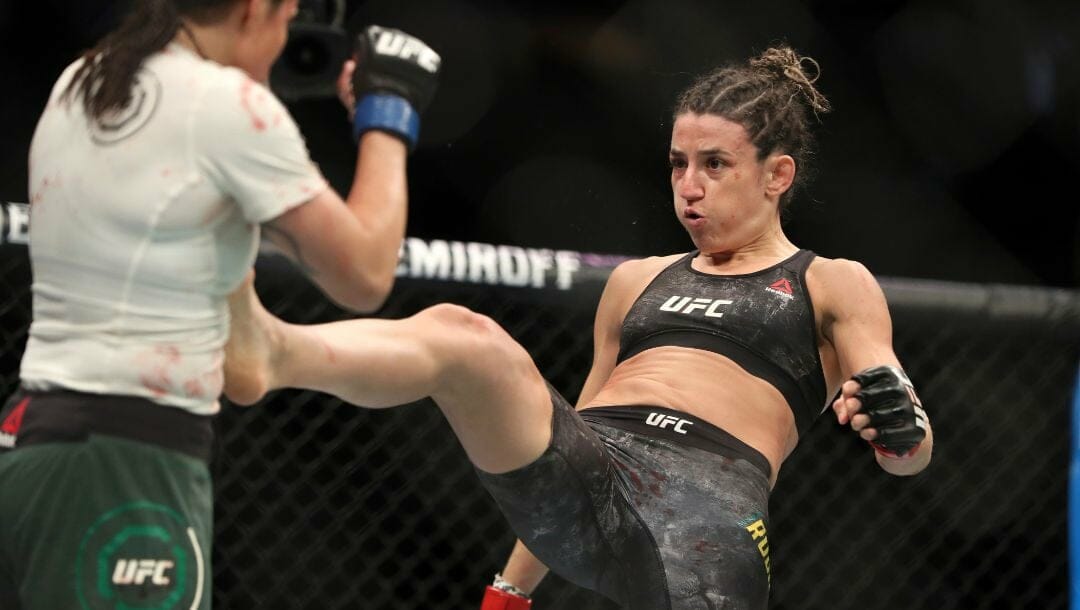 Two of Brazil’s top strawweight contenders face each other this weekend inside the UFC Apex in Las Vegas as number three-ranked challenger Marina Rodriguez (16-1-2) collides with the number seven-ranked contender Amanda Lemos (12-2-1) to increase their chances in the UFC odds of getting a world title shot against the 115-pound champion.

Rodriguez, who currently rides a four-fight winning streak, is the UFC betting favorite at -225 against her compatriot, who is the underdog at +180. Lemos was fresh off a bounce-back submission win in her latest bout three months ago.

Marina Rodriguez was a highly-touted prospect before she joined the UFC because of her undefeated record of 9-0 from different MMA organizations. Her route of cracking a roster spot with the Las Vegas-based promotion came via the Dana White’s Contender Series in August 2018, where she impressively defeated Maria Oliveira via first-round TKO. The win secured Rodriguez a UFC contract.

A month later, in September 2018, the Thai Brasil representative made her UFC debut against Randa Markos, which resulted in a majority draw. This unusual result in her debut was never an issue for Rodriguez. She went on to win her next two UFC fights against Jessica Aguilar in March 2019 and Tecia Torres in August 2019 through a unanimous victory.

But after these wins, the Brazilian MMA star received another draw as her bout with Cynthia Calvillo in December 2019 ended in a majority draw. The silver lining with this second stalemate is that she kept her record intact and remained undefeated. Carla Esparza snapped this immaculate record in July 2020 after she eked out a close split decision victory over Rodriguez in their strawweight showdown.

Because of this loss, Rodriguez went on a revenge tour by winning her last four fights, including three decision victories and one finish. She started this consecutive win by stopping Amanda Ribas in January 2021 with an outstanding second-round finish. This win catapulted the Brazilian into the rankings and earned her fight night main event features.

Rodriguez’s first headliner came in May 2021 when she was scheduled to fight Michelle Waterson, and she unanimously beat her. She followed it up with another main event appearance against Mackenzie Dern in October 2021 and got another masterful victory via unanimous decision. This helped her climb up the 115-pound women’s division.

Marina Rodriguez’s latest triumph was against Yan Xionan, whom she defeated via split decision in an entertaining back-and-forth bout in March 2022 during UFC 272. This win extended her winning streak to four and improved her record to 16-1-2. Additionally, she barged her way into the rankings by securing the number three spot.

Another Brazilian who is slowly making a name for herself is Amanda Lemos. The 35-year-old fighter out of Belem, Para, Brazil, will compete in her 9th UFC fight this weekend. Lemos was also an undefeated MMA fighter (six wins and one draw) when she signed by the UFC in 2017. But her debut in July 2017 concluded in a loss to Leslie Smith via second-round TKO.

This debut defeat didn’t discourage the Marajo Brothers Team athlete as she went on a five-fight winning streak after a two-year hiatus from the sport. Lemos’ comeback trail began in December 2019 when she put Miranda Granger to sleep with a first-round rear-naked choke submission. Then, she unanimously beat Mizuki Inoue in August 2020 to score back-to-back wins.

The streak continued with two first-round TKO wins over Livinha Souza in March 2021, Montserrat Ruiz in July 2021, and a razor-thin split decision victory over Angela Hill in December 2021. Because of these spectacular five-fight consecutive triumphs, Lemos obtained her first main event in April 2022, where she was pitted against former champion Jessica Andrade.

Unfortunately, she was submitted by Andrade in the opening round of their contest via arm-triangle choke submission to officially halt her unbeaten run to five and receive her second career loss. But Lemos quickly returned to the win column by submitting Michelle Waterson in the second round of their July 2016 showdown. It improved her record to 12 wins, two losses and one draw.

Rodriguez vs. Lemos: Tale of the Tape and Fight Analysis

Marina Rodriguez will have a slight edge in terms of physicality over Amanda Lemos because she has a two-inch height advantage and two-and-a-half leg reach advantage over her compatriot in this particular match. The reach for both fighters is equal at 65 inches. Record-wise, Rodriguez also has the better number against Lemos, with the former’s 16-1-2 compared to the latter’s 12-2-1.

Stylistically, this will be a banger because these two top strawweight contenders are known to be striking aficionados. A good proof of this is their TKO/KO percentage, with Lemos having 58% of wins via finishes and Rodriguez parading 38% of her own. Although they also hold submission wins in their record, their stand-up game remains to be their number one weapon.

Despite this discrepancy in grappling, I still believe that Marina Rodriguez will win this fight against Amanda Lemos because of her pressure, volume, a wide array of strikes, speed, and durability. Not to mention that she can neutralize the power of Lemos with her Muay Thai clinch while throwing devastating knees simultaneously. This is her favorite technique to win on the judges’ scorecards.