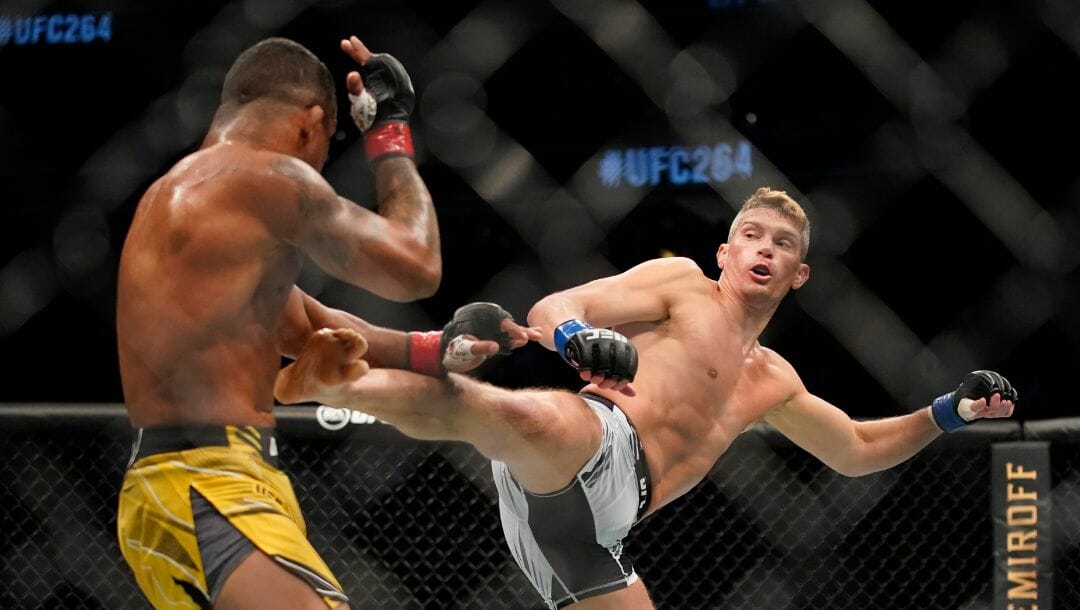 A striking extravaganza headlines the main event of UFC on ESPN 42 inside the Amway Center in Orlando as UFC’s No. 6 welterweight contender Stephen Thompson (16-6-1) clashes with dangerous striker Kevin Holland (23-8). Both Thompson and Holland are still exciting names in UFC odds despite coming off losses in their respective last outings.

Fight fans, have we got a gift for you 🎁@WonderboyMMA takes on @Trailblaze2top in your #UFCOrlando main event!

Holland will come in as the slight UFC betting favorite at -145 over the much more experienced Thompson, who assumes the role of an underdog at +120. This slim margin in BetMGM’s online sportsbook shows that both athletes are dangerous striking finishers who have combined for 20 TKO/KO victories (seven for Thompson and 13 for Holland). Oddsmakers gave the thin edge to Holland because he is nine years younger than Thompson, who is also probably in the tail-end of his MMA career.

Stephen Thompson is one of the true veterans of the Las Vegas-based promotion, as he has been with the company since 2012. He earned a spot on the roster after winning all his first five MMA fights outside the UFC, including three finishes (two TKO/KOs and one submission). Thompson made his UFC debut in February 2012 and knocked out Dan Stittgen in the opening round via head kick.

Matt Brown delayed “Wonderboy’s” rise to the rankings in April 2012 as he unanimously beat him, but it was only a small roadblock to Thompson’s path to a title shot because he went on a seven-fight win streak which began in May 2013 when he bounced back against Nah-Shon Burrell with a masterful decision victory. Four months later, in September 2013, the Team Upstate Karate fighter TKO’ed Chris Clements in the second round of their bout.

The South Carolina native’s seven successive wins secured him a championship opportunity against Tyron Woodley in November 2016. The two delivered an instant classic that ended in a majority draw decision. This result prompted the UFC to grant a rematch between the two instantly. In March 2017, Thompson once again pushed Woodley to a five-round affair, but the champion got away with the win via majority decision.

After coming short of calling himself a champion, Thompson returned to action in November 2017 and scored a unanimous decision triumph over Jorge Masvidal. But “Wonderboy” suffered back-to-back losses from Darren Till (in May 2018 via decision) and Anthony Pettis (in March 2019 via second-round knockout). Before closing out 2019, Thompson redeemed himself by outpointing Vicente Luque in November of that year.

He was able to sustain his momentum by notching another victory over Geoff Neal in their December 2020 clash. However, it was Thompson’s last taste of glory because currently, he is on a two-fight slide following decision losses from Gilbert Burns (in July 2021) and Belal Muhammad (in December 2021). The 39-year-old hopes to snap this skid against Holland and remain relevant in UFC’s 170-pound division, thus making another title run.

Kevin Holland’s road to the UFC was through Dana White’s Contender Series where he appeared in Season 2, Week 1 in June 2018 and outstruck Will Santiago Jr. to obtain a UFC contract. Before joining the contender series, Holland already had 12 wins (all finishes with seven TKO/KOs and five submissions) and three losses to his record. He competed in multiple MMA promotions and organizations.

The “Trailblazer” was originally a middleweight who made his UFC debut in August 2018 but received a decision loss from Thiago Santos. But Holland instantly got back to the win column and even amassed a mini streak of his own by beating John Philips in November 2018 via a third-round rear-naked choke, Gerald Meerschaert in March 2019 via split decision and Alessio Di Chirico in June 2019 via unanimous decision.

Holland earned his stripes and was on the correct trajectory to be a top contender in the 185-pound division, but reality sunk in when ranked oppositions Derek Brunson and Marvin Vettori dealt him with lopsided decision defeats in March 2021 and April 2021, respectively. Another uneventful result in October 2021 appeared to be the last straw for Holland to move down in division.

He and Kyle Daukus fought to a no-contest fight where an accidental clash of heads occurred in the early stages of the fight. The Forth Worth, Texas-based fighter was officially welcomed in the 170-pound weight class by Alex Oliveira in March 2022 and got the job done by stopping the Brazilian with a second-round TKO triumph. Three months later, Holland submitted Tim Means in the second round of their meeting to begin his quest toward bigger fights in the welterweight division.

Holland’s latest fight came against an undefeated prospect and one of UFC’s rising stars, Khamzat Chimaev, after a significant and quick reshuffle of the UFC 279 pay-per-view event in September 2022. He was supposed to fight Daniel Rodriguez in a welterweight bout but ended up fighting Chimaev in a 180-pound catchweight match after the Swedish star failed to make it to 170-pounds. Eventually, Holland suffered a first-round submission loss to Chimaev via brabo choke.

Thompson vs. Holland: Tale of the Tape and Fight Analysis

On paper, Holland almost has all the advantages physically over Thompson. The former stands three inches taller at 6-foot-3 than the latter, only at 6-foot, and has an enormous upper hand in reach with Holland’s 81 inches compared to Thompson’s 75 inches. Although the much older Thompson will carry a two-inch leg reach edge at 42 inches against Holland’s 40 inches.

Both Holland and Thompson are known finishers, with them having a high rate of TKO/KO wins, 52% for the ”Trailblazer” and 42% for the ”Wonderboy.” This number is backed up by their virtually identical significant strikes production – 3.90 strikes landed per minute for Thompson and 3.85 for Holland, which is equal to 43% and 54%, respectively. Their stand-up defense is also similar in numbers as Holland absorbs 2.38 strikes per minute (55% defense) and Thompson at 2.81 (56% defense).

Stylistically, this match will be a striking masterclass because both Thompson and Holland possess a martial arts technique based on fighting on the feet, with Thompson being the Karate fighter and Holland the Kung Fu expert. ”Wonderboy” will rely more on his kicks and unorthodox angle of strikes, while the ”Trailblazer” will be looking to counter the attack from his opposition.

Despite the excitement of these two welterweights’ styles, Holland might want to use his grappling edge over Thompson to neutralize his speed and awkward fighting style. Additionally, Thompson’s last two losses presented a blueprint on how to beat his technique: take him down the mat, control him and possibly submit him. The former title challenger was taken down by Gilbert Burns three times and by Belal Muhammad seven times.