Mark Mulder had tight rotation on his curveball, late run and sink on a 92-mph fastball, and deceptive changeup, longtime MLB scout Russ Bove, then working for the Milwaukee Brewers, wrote in his 1998 scouting report of the Michigan State star.

Bove’s report made no mention of Mulder’s success as a hitter – he hit .317 with 11 home runs and 65 RBI over two collegiate seasons – nor did the Oakland Athletics when drafting Mulder with the second overall pick in the 1998 MLB Draft.

“All through high school and college, I played first base when I didn’t pitch,” Mulder told Olivia Harlan Dekker and Speedy Morman on the Unleashed podcast this week. ”I don’t think I could possibly imagine doing that at the big league level, though. Doing it in the minor league level, I suppose I could maybe understand it. But at the big leagues, being prepared day in day out to do that, that to me is incredible.”

Shohei Ohtani is “incredible” to Mulder, a two-time MLB All-Star who won 103 of his 202 career starts and hit .162 with one home run and nine RBI over nine MLB seasons. Ohtani, 4-3 in 14 career starts, is years away from matching Mulder’s career win total but he matched Mulder’s career home-run total in his second career game and RBI total in his seventh career game.

Days into his fourth season, all of which have been abbreviated, Ohtani has established himself as one of the best hitters and pitchers in baseball, set several two-way player records, and ended several other two-way player droughts. His success is unfathomable to Mulder, who talked about Ohtani, his own introduction to the big leagues in 2000, and more on this week’s episode of Unleashed.

Listen below or on Apple Podcasts, Spotify, and everywhere podcasts are available:

At BetMGM, we have daily MLB odds throughout the entire season. From futures and props to parlays and teasers, the best online sports betting and baseball betting experience is at BetMGM. 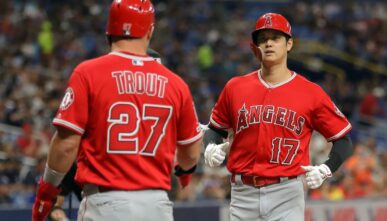