In the playoff race, the New York Rangers had nothing to play for against the Washington Capitals on Wednesday, May 12. They were eliminated from playoff contention with a loss to the Capitals two days earlier. In the big picture of the franchise’s future, the Rangers had a lot to play for, says former NHL goalie Marty Turco.

In the 6-3 elimination loss two days earlier, Rangers’ forward Artemi Panarin was injured when slammed to the ice by Capitals’ forward Tom Wilson, who also punched a defenseless Pavel Buchnevich. Wilson earned a 10-minute double minor penalty and a $5,000 fine for punching Buchnevich, a shockingly light fine that showed George Parros, the NHL’s head of player safety, is “unfit to continue in his current role,” the Rangers alleged in a statement that triggered a $250,000 fine.

“There are lines that can’t be crossed in this game,” Rangers’ head coach David Quinn said after the game. “There’s just zero respect for the game in general. You got one of the star players in this league now that could have gotten seriously, seriously hurt in that incident. You all saw what happened, and it happens time and time again with him. Totally unnecessary.”

The Rangers’ response on Wednesday night – an opening face-off brawl and several subsequent fights in the first period of an eventual Capitals’ win – was totally necessary and will set the tone for the organization after a third playoff whiff in the last four years, Turco said on this week’s episode of Unleashed.

“I love it,” the former longtime Dallas Stars’ goalie told Olivia Harlan Dekker and Speedy Morman. “…Even though they’re not going to make the playoffs this year, I guarantee you it’s going to positively affect that organization next year. A lot of that team will be coming back … The guys that were there are going to remember this one.”

Turco joined Unleashed to talk about the fights, preview the Stanley Cup playoffs, talk about growing up in hockey-obsessed Canada, and more. You can listen to the full episode below or listen on Apple Podcasts, Spotify, and everywhere else is available.

Listen to past episodes of Unleashed with guests Austin Ekeler, Chad Johnson, Jalen Rose, and others.

At BetMGM, you can view NHL odds and place NHL parlay bets. With Stanley Cup odds, live betting, props, and more, the best online sports betting experience is at BetMGM. 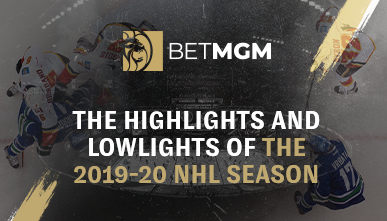