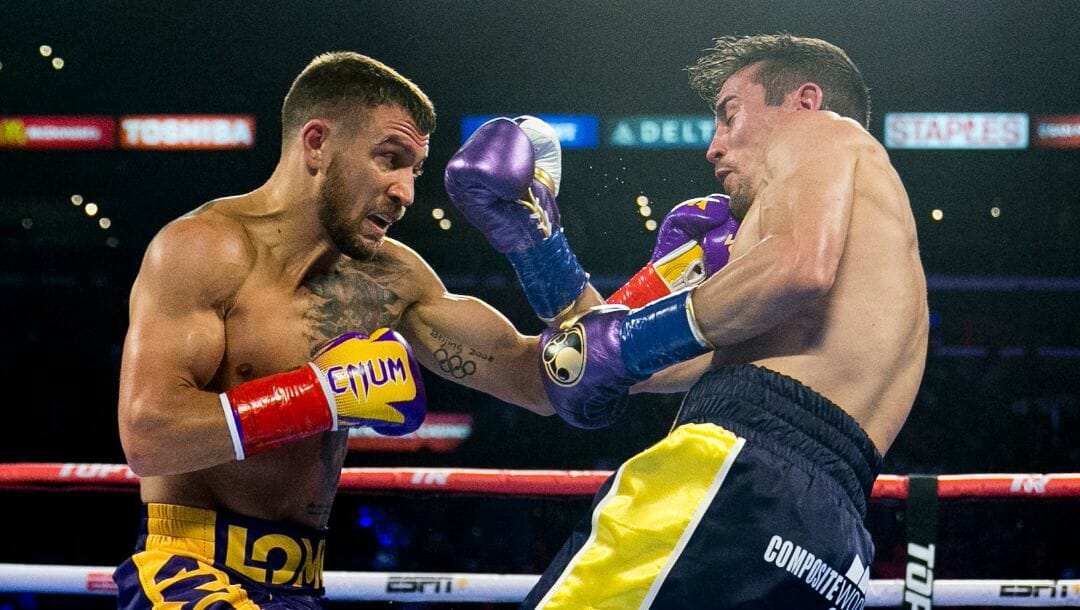 Madison Square Garden’s Hulu Theater plays host to an exciting lightweight boxing battle between Vasiliy Lomachenko (16-2) and Jamaine Ortiz (16-0-1) this Saturday, October 29, to determine who will fight the division’s undisputed champion, Devin Haney, and create a megafight that could result in interesting boxing betting lines for fight fans.

Lomachenko, the boxing betting odds heavy favorite at -2000, is currently on a two-fight winning streak after losing his titles in 2020. The “Matrix” was unanimously beaten by Teofimo Lopez, who snatched his WBO, WBA and IBF World Lightweight Titles. It was also Lomachenko’s second career defeat.

Meanwhile, Ortiz looks to defy the huge boxing odds stacked against him as he will come in as the overwhelming underdog at +900. The 26-year-old American looks to score a huge upset and give Loma his third career loss. The American is fresh off a unanimous decision over Jamel Herring to add the IBF USBA Lightweight Title to his collection.

New York is about to have a problem 😈

After a successful amateur career that saw him win multiple international and European tournaments, Vasiliy Lomachenko capped off his illustrious non-pro career with back-to-back gold medals during the 2008 and 2012 Olympic Games in Beijing and London. Lomachenko immediately made his professional debut in 2013.

Unfortunately, he suffered a close split decision loss to Salido. But this didn’t deter him as Lomachenko was given another opportunity to win the same belt because he was matched against Gary Allen Russell Jr. in June 2014. This time, he brought home the WBO Title by scoring a majority decision victory. After this triumph, Loma defended the title three times.

Lomachenko fended off the challenges from Suriya Tatakhun in November 2014 via unanimous decision, Gamalier Rodriguez in May 2015 via ninth-round knockout and Romulo Koasicha in November 2015 via tenth-round knockout. The Bilhorod-Dnistrovskyi, Ukraine-born boxer, moved up to the super featherweight division and continued his success thereby beating Roman Martinez and bagging the WBO Super Featherweight Title in June 2016.

The now Oxnard, California, native successfully defended the title four consecutive times, all via corner stoppages, against Nicholas Walters (in November 2016), Jason Sosa (in April 2017), Miguel Marriaga (in August 2017) and Guillermo Rigodeaux (in December 2017). This success allowed Lomachenko to move to a higher weight class in the lightweight division, where he would win three championship belts.

Unfortunately, this was a brief reign for Lomachenko as Teofimo Lopez masterfully defeated him in October 2020. After that loss, Loma bounced back against Masayoshi Nakatani by stopping the Japanese in the ninth round. He then added Richard Commey to his victim list in December 2021 by lopsidedly beating him to win the vacant WBO Inter-Continental Lightweight Title. The Ukrainian intends to use this fight with Ortiz as a jumping board back to title contention.

Despite this unsuccessful run in the amateurs, Ortiz still continued his boxing career and made his professional debut in May 2016 by stopping Josh Parker in the first round of their fight. He probed around the 135-pound and 140-pound divisions in his next eight bouts. He remained undefeated by outlasting Kimmy St-Pierre, Canton Miller, Glenn Mitchell, Angel Figueroa, Darnell Pettis, Derrick Murray, Victor Rosas and Tyrone Luckey.

Ortiz’s minor blemish on his professional record came in April 2021 when his match with Joseph Adorno ended in a majority draw decision. After that draw, the 26-year-old rebounded with two unanimous decision wins over Nahir Albright in February 2022 and Jamel Herring in May 2022 to win the North American Boxing Federation Lightweight Title and the IBF USBA Lightweight Title. Though he remained undefeated, this was still one minor flaw in his boxing record.

This impressive run has allowed Jamaine Ortiz to compete in the biggest bout of his career by far, as he will meet the former titlist Vasiliy Lomachenko. The American wants to score a huge upset to potentially challenge for his first major title soon if he beats the Ukrainian boxing superstar.

Both Lomachenko and Ortiz are gunning for their 17th career win this Saturday. They are both known to be great finishers, as Loma holds a 68% knockout percentage while Ortiz has 50% of his own. Despite the much lower knockout rate, the “Technician” will have the height and reach advantage as he stands at 5-foot-8 (Loma at 5-foot-7) and has a 69-inch reach, while the Ukrainian only has 65-and-a-half-inch reach.

Experience and level of competition are in Lomachenko’s favor because he fought for world titles throughout his career and has a wealth of credentials that date back to his amateur days. In contrast, Ortiz only fought briefly in the amateurs and was only pitted for minor titles. However, the youth advantage will be on the American’s side because he is eight years younger than the former world champion.

In terms of style, Lomachenko clearly has the speed edge over Ortiz because of his incredible footwork, which allowed him to win two Olympic gold medals, three major lightweight titles and stop 11 of his 16 opponents. Loma also has incredible feints that confuse his foes and open opportunities for him to sneak up several combinations he lands through angles and setups.

Meanwhile, Jamaine Ortiz has a constant strategy of moving forward to corner his opponents on the ropes. Once they are on their back foot, the American will swarm them with powerful punches that would hurt them and eventually stop the fight in his favor. Additionally, the 26-year-old loves to load up on his punches to knock his opponent out. This style has granted Ortiz eight finishes in 17 professional fights.

Despite Ortiz’s power, I expect Lomachenko to win this fight because of his superior skill set, experience and speed over the young boxer. The Ukrainian superstar will use his speed to land punches on Ortiz and make him miss throughout the fight. Plus, the rate of punches that Loma will unleash over the “Technician” will be too much, and we will see this fight as another victory for Vasiliy Lomachenko.